All That is Lost Between Us by Sara Foster is the fourth novel by English-born Aussie dwelling author. The former book editor now lives in West Australia and is currently studying dystopian fiction as part of her PhD at Curtin University.

Her latest novel features several themes but I’ve taken the opportunity to talk to her about what I see as the biggie…. motherhood.


Seventeen-year-old Georgia has a secret – one that is isolating her from everyone she loves. She is desperate to tell her best friend, but Sophia is ignoring her, and she doesn’t know why. And before she can find out, Sophia is left fighting for her life after a hit and run, with Georgia a traumatised witness.

As a school psychologist, Georgia’s mother Anya should be used to dealing with scared adolescents. However, it’s very different when the girl who needs help is your own child. Meanwhile, Georgia’s father is wracked with a guilt he can’t share; and when Zac, Georgia’s younger brother, stumbles on an unlikely truth, the family relationships really begin to unravel.

Q. Your lead characters are often strong and determined women. Have you been inspired by anyone in particular or do they represent an ideal or aspirational figure or role model?

Great question! I’m inspired by many different types of women – those who do a fantastic job of looking after their families, those with difficult professions, or who cope amazingly in traumatic circumstances, and those who diligently pursue their passions. I find something inspiring in most women I know, as well as other writers and public figures.

I’m really inspired by writers who not only write beautifully but speak eloquently too – Maya Angelou, who passed away last year, was one of my favourites. I only really became aware of Ursula Le Guin last year, but since then everything I read or hear or see of her is inspiring. These are just two examples from a long, long list.

I’d had so many dreams about what kind of mother I was going to be. p 320

Q. What are your thoughts on the pressures on mothers (parents?) today? Do you think these are made worse by media / social media? 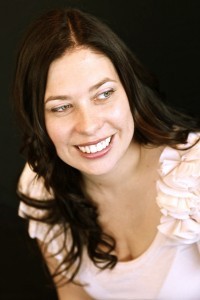 Well, I could talk about this one A LOT. I think there are enormous pressures on parents today. Financially, many parents need to sacrifice time with very young children to afford the rising cost of living. The ‘post-baby body’ obsession is terrible – just when new mums are going through the (often agonising) early days of trying to get their babies feeding well, they are bombarded with images of svelte new mums who seem to have it all together. And thanks to the internet, parents are overloaded with information – often subjective or judgmental or just plain wrong – and it begins with pregnancy and doesn’t stop.

Technology is an amazing thing, but like everything it comes with a flipside. There’s a scene quite early on in All That is Lost Between Us where Anya has assumed her daughter is resting then she realises she’s on Facebook in the middle of the night. Social media is all-pervasive if we allow it to be. Nowadays we each have to consciously determine when to switch off and how much of the world to let in, and then we need to figure out how to help our children with that too!

Q. Do you think there’s a time parents are forced to transition BACK from seeing themselves as ‘only’ mothers / fathers to rediscovering their own identity?

Yes, I do think there’s a transition. I watched my parents’ generation dealing with this when we all left home, and like any time of change it is uncomfortable and introspective and comes with a sadness of things that are ending as well as the potential excitement of new beginnings for everyone. In my novel it’s just starting to hit home for my character Anya that soon she will have an empty nest, and she’s going through all sorts of emotions about that – and re-evaluating her relationship with her husband too. I have written about it without having actually experienced it, but I felt I had a solid sense of it through my observations of others, and through my own experiences of letting go of different stages in my young children’s lives.

Even though my work is all about breakdowns in communication, for a long time I couldn’t help but be smug enough to think it wouldn’t happen to me. p 18

Q. How important was it (to the novel) to make Anya’s character a school psychologist?

I definitely wanted Anya to be the school psychologist, for a number of reasons. First of all, it gave me extra access to the kids during school hours, which helped in plotting the story! However, I love the conundrum that Anya’s profession provides: it makes her the ideal person to talk to Georgia, and yet because she is Georgia’s mother she is one of the hardest people for Georgia to turn to. How incredibly frustrating for Anya – which she acknowledges openly in the narrative.

This professional­–personal interplay is fascinating, because it’s so easy to assume that professional training would give Anya an advantage in communicating with her distressed child, whereas to begin with it seems like a disadvantage. However, I will be interested to see how readers think this plays out. I’m happy for that to be a point of discussion!

All That is Lost Between Us by Sara Foster was published in Australia by Simon & Schuster and is now available.

I’m participating in a blog tour in celebration of the release of this book. Don’t forget to check-out the other blogs taking part and a big thanks to Sara (and Simon & Schuster) for her time. 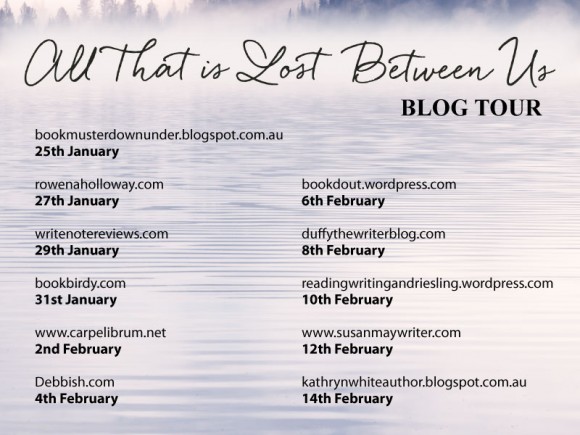 Do you think it would be easier / harder to parent when you’re supposedly trained as an expert – teacher, counsellor or child care worker for eg?
And what about parenting and social media? Do you agree there are positives and negatives?