It’s 1997 and Dani, Courtney and Jess are Those Girls. By their mid-late teens they’ve lost their mother, received beatings at the hands of their alcoholic and often-absent father, all-but-starved and done a stint in foster care. Although Dani’s 18 she knows her younger sisters (particularly 14, almost 15 year old Jess) will be back in foster care if this latest incident involving their father comes to light.

So the girls go on the run. In true teenage style they only  have a vague plan with Vancouver and new identities their end goal. But enroute their truck breaks down and they find themselves trusting the wrong men and what happens next changes their lives forever.

We then flip forward to 2015 and Dani, Courtney and Jess are now Dallas, Crystal and Jamie. Their lives are far from those they dreamed of when young and all three have struggled to move on; sure their past will catch up with them. Which… inevitably it does. 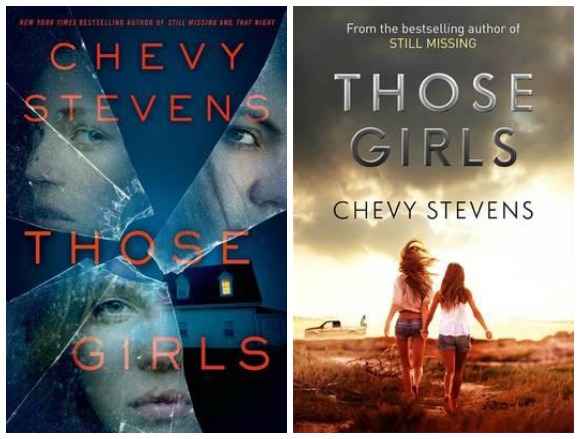 I very much enjoyed this latest offering from Chevy Stevens. Her 2010 debut novel Still Missing was a favourite when it was released (back before I was blogging about books!). I haven’t enjoyed her subsequent work as much but think Those Girls is a move back to her best work.

She does a great job with her characters. All three leads (and Skylar, who we meet later) are fabulously drawn and complex. They’re all very different but with a palpable bond; so it was hard not to share their ordeals. Indeed I shed tears on a couple of occasions throughout this book.

It’s well-written and Stevens keeps the pace and action tight. Part of me was in disbelief that so much bad stuff could happen to one family of girls, but I’m kinda conscious that they were at risk before they even left home. And their teenage naiveté did not help. I kept mentally screaming “Noooooo!” and trying to prevent the fate I suspected would be befalling them.

I’d had this book in my reader for months and had to reprioritise it until closer to its publication date, although several times I was tempted to leap frog over other books being published earlier. It was definitely worth the wait.

Those Girls by Chevy Stevens was published by St Martin’s Press on 7 July 2015 (and is available in Australia via Hachette from 14 July).

I received an electronic copy of this novel via NetGalley from the publisher for review purposes.