I really loved Chevy Stevens‘ debut novel Still Missing. I even reviewed it in Goodreads – back when I wasn’t writing reviews. In fact I loved it so much I immediately tracked down her second book (Never Knowing). Somehow in the excitement of my sea (and life) changes last year I missed her third novel – not even knowing it existed until I had the opportunity to read and review her fourth. (And yes, I’ll be tracking down Always Watching.)

I should mention, the most unfortunate thing about her latest novel (That Night) is that I read it directly after another with a similar premise, Dear Daughter – which I’m reviewing on the blog in a month or so – and which I bloody well loved.

Toni was a rebellious and challenging teenager. In love with her boyfriend Ryan, she seemingly cared about little else. Even at eighteen, Toni was keen to leave her childhood behind her: she was bullied by a group of girls for the pettiest of reasons; and her relationship with her mother was strained and almost to the point of no return. Although (in her mother’s eyes) Toni suffered in comparison to her younger sister Nicole, the latter had suddenly become moody and secretive. 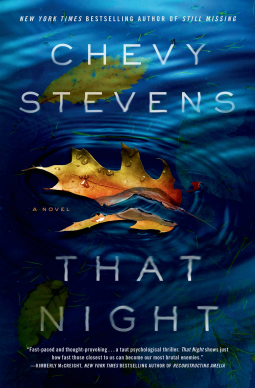 Relieved she’s finished high school Toni’s ready to move in with Ryan when 16 year old Nicole is killed and Toni and Ryan accused of the crime. Their ‘difficult’ reputations precede them and the young pair are both found guilty.

We meet Toni 16 years later when she’s due for parole. She’s done it tough inside and Stevens’ novel kicks off alternating between her release on parole, her arrival in jail and the events of 16 years before.

Originally wanting justice for her sister and to pay=back those who put her in jail, by the time she’s released Toni just wants to get on with life. Though estranged from her parents and friends, she heads back to her hometown where she settles into a relatively contented existence.

Unsurprisingly (given her ridiculously – and frustratingly – bad luck) it doesn’t last long.

Although the terms of her parole forbid her from seeing former boyfriend, lover and co-defendant Ryan, he returns as well; but unlike Toni he’s wanting revenge for being sentenced for a crime he didn’t commit. Torn between her eagerness to stay out of trouble and prison and her feelings for the boy Ryan once-was, Toni again finds herself faced with false allegations in an attempt to drive her out of town.

We’re in Toni’s head, so we ‘know’ she’s innocent (plus the back cover blurb tells us so). Although  quite unlikeable, I found it frustrating that SO many things could go wrong in one person’s life. And then there’s the injustice of it all… being falsely accused and losing her parents and any friends she had in the process. By the end even I wanted the bastards to pay!!!

Although I’ve loved Stevens’ earlier work I really struggled with the first half of this book. Toni’s voice didn’t really sit well with me. Sure she wasn’t particularly likeable for much of the novel, but there seemed something a bit awkward about the way her character was written and I struggled with both the school and prison scenes.

However… once Toni returned to her hometown it all changed for me. I couldn’t turn the pages quickly enough… desperate to know what was going to happen. It also helped that Toni herself changed – finally taking control of her life.

That Night, published by St Martin’s Press is available from 17 June 2014.