There is currently a LOT of hype around The Chain by Adrian McKinty. I keep seeing articles on social media about the film rights of a book written by an Uber driver sold for a seven figure sum.

There’s actually an interesting note in the back of this book from McKinty about life as a writer. He’s got his successful Sean Duffy series under his belt but it’s a reminder that many seemingly-successful creatives (authors and the like) don’t actually earn much from their craft. Most have other jobs and alternative sources of income. Which makes me feel a bit grumpy about some idiotic athletes who earn gazillions.

But enough of my ranting. Let’s get down to it cos this standalone by McKinty is (#spoileralert) certainly worth all of the praise it’s getting. I wasn’t sure I was going to be enamoured but I was gobsmacked at how ‘real’ it all felt from the opening lines.


You just dropped off your child at the bus stop.A panicked stranger calls your phone.Your child has been kidnapped.

The stranger then explains that their child has also been kidnapped, by a completely different stranger.The only way to get your child back is to kidnap another child - within 24 hours.

You are now part of The Chain.

Generally I cringe when the blurb tells me what’s going to happen. Like… ‘ugh, how tedious we have to go through this when we know what’s coming,’ kind of thing. And in many ways that’s the case. But… what Kylie goes through as a kidnap victim and what her mother Rachel goes through is meticulously detailed by McKinty. It feels incredibly real and we’re right there along with Rachel as she’s begging for loans, buying a gun and heading onto the Dark Net.

The pace is cracking from the get-go and continues like that until over half-way through the book. It seems unfathomable that these victims or targets can do this, can endure this and then force others to do the same.

Usually I hate knowing ‘whodunit’. Here the kidnappings are so random – that we can’t really be suspicious of any one character in particular. Well, until later, but I think it’s kinda obvious when we ‘meet’ them.

But we’re put into the mind of an unlikeable psychopath quite early and (sort-of) know who is behind it; or at least the ‘why’. And I think it’s the complete lack of guilt or feelings (neither empathy nor salacious joy) towards anyone involved that makes it harder to comprehend. They’re pragmatic… at least initially.

We readers wonder, is The Chain then only about the money? Or is it a game?

The Chain is largely a self-regulating mechanism that repairs its own broken DNA with only a little nudging from the outside. p 43

… the more people that are added to The Chain, the more likely it is that there will be a major defection. That’s why fear is so important. That’s the whole mental component. p 111

McKinty does a great job with character development in the Sean Duffy series and it’s the same here. They’re far from perfect and Rachel, her ex-husband Marty and brother-in law-Pete are all complex and real. McKinty pulls no punches in giving ex-marine Pete a heroin addiction and even the irresponsible Marty ends up being kinda likeable. Similarly the other kidnappers are painted shades of grey rather than black/white.

It was almost ironic that the series with which I’m familiar (the Sean Duffy series) is set in Ireland in the 1980s and devoid of technology. Whereas here, the level of complexity in terms of TOR,  the Dark Net, Bitcoins, Wickr apps and Faraday cages was very technical. I didn’t understand much of it but that didn’t matter as it seemed well researched and all plausible. 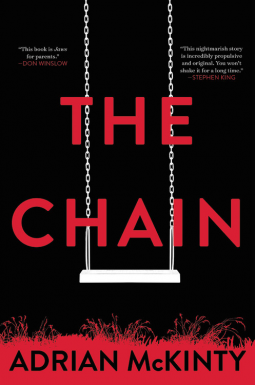 My only real complaint (and yes, I know I’m picky) is that the pacing felt teensy bit erratic. Initially it was fabulous, and then there was a bit of a lull as we are taken out of the plot and given some backstory about those behind The Chain. I had thought we’d stay in the past, but McKinty then takes us in and out so we see how/why The Chain was born. Things speed up again towards the end but it felt a little too rushed in the final pages. I had to stop and flick through them again in case I’d missed something.

And on a couple of occasions (more towards the end) it felt McKinty shifts the point of view to some sort of external third party – a bit like an off-stage narrator, foreshadowing impending doom.

Of course that really didn’t matter. This is a riveting read. It’s well-written in McKinty’s easy but eloquent prose; features great characters (the goodies and even the baddies) and offers up a plot that is original and really very clever. (And I kinda felt like it needs a “Please don’t try this at home,” warning cos we don’t want to plant ideas in anyone’s head!!!)

The Chain by Adrian McKinty will be published in Australia by Hachette and in the US by Mulholland Books on 9 July 2019.