While I’m not a fan of historical fiction, I appreciate multi-timeframe novels which delve into deep dark past secrets. I enjoy Kate Morton’s work (for example) and her books usually deliver on that front. In addition to the promise of buried mysteries, I’ve recently become interested in events in Australia surrounding WWI so was keen to read more about that time from history-lover and researcher Julian Leatherdale in his debut novel Palace of Tears.

Angie loved Mr Fox’s magnificent, absurd hotel. In fact, it was her one true great love. But … today Angie was so cross, so fed up with everybody and everything, she would probably cheer if a wave of fire swept over the cliff and engulfed the Palace and all its guests. 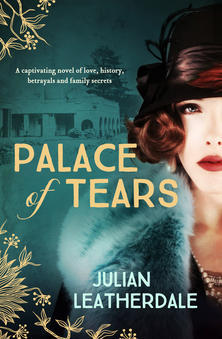 A sweltering summer’s day, January 1914: the charismatic and ruthless Adam Fox throws a lavish birthday party for his son and heir at his elegant clifftop hotel in the Blue Mountains. Everyone is invited except Angie, the girl from the cottage next door. The day will end in tragedy, a punishment for a family’s secrets and lies.

In 2013, Fox’s granddaughter Lisa, seeks the truth about the past. Who is this Angie her mother speaks of: ‘the girl who broke all our hearts’? Why do locals call Fox’s hotel the ‘palace of tears’? Behind the grandeur and glamour of its famous guests and glittering parties, Lisa discovers a hidden history of passion and revenge, loyalty and love.

A grand piano burns in the night, a seance promises death or forgiveness, a fire rages in a snowstorm, a painter’s final masterpiece inspires betrayal, a child is given away. With twist upon twist, this lush, strange mystery withholds its shocking truth to the very end.

To coincide with Anzac Day I wrote about about my great great uncle, who was the first man ashore at Gallipoli. In the lead-up I watched an amazing documentary about Pozieres, which is where that same great great uncle lost his life. I was aghast at our treatment of those of German descent living in Australia. I had NO IDEA we kept men in camps before deporting them; and was very disappointed at my fellow Australians’ treatment of people who’d chosen to come to our shores. I also commented that we seem to be doomed to repeat history without heeding its lessons.

There is no doubt that Leatherdale knows his stuff. His references to events of that time and fictional activities surrounding it were astonishing and his passion evident.

Palace of Tears in written in third person but we’re in the heads of a range of characters, including Angie and her mother Freda; Adam’s wives Adelina and Laura; Laura’s daughter (Monika); and granddaughter, Lisa. We visit upon Adam as well but this novel is very much about the impact his actions have on the women in his life. And what magnificent women they are!

Interestingly I found Lisa—our main storyteller—less engaging than her descendants, but then again… she had fewer secrets. (She often talked about her difficult childhood but I felt we didn’t get much insight into what was so traumatic about it… other than a seemingly disengaged mother.)

I would have liked more from Angie’s point of view, but we later learn why this is not possible… however her role (as we know it and as we later learn) is integral to the novel and the narrative at hand.

This is a well-written book with a great sense of place. The hotel and the surrounds were well-drawn and events of the time exquisitely detailed. I realise the current day characters were just conduits for the unfolding past, but I didn’t really feel anything for Lisa and historian Luke.  I also felt there were a few gaps and occasionally wanted to flick back through the book to see if I’d missed anything—only to find it explained in detail later. So, perhaps they (along with a few loose ends) were just editing issues.

However this is a great debut novel from Julian Leatherdale which achieves a good balance between educating and entertaining readers.

It’s a long read (at 560 pages), and its cover one of the most stunning I’ve seen in a long time.

Palace of Tears by Julian Leatherdale will be published by Allen & Unwin on 27 May 2015.