One hundred years ago today, the first ANZACs landed on the beaches of Turkey to engage in a battle they would not win. Twenty-six year old Queenslander Lieutenant Duncan Chapman was the first ashore.

To me was given the extreme honour of being actually the first man to step ashore on this peninsula, to lead a portion of the men up the hill in that now historic charge.

What a living hell it was too, and how I managed to go through it from 4 o’clock in the morning of Sunday, the 25th April, to Wednesday, the 28th, under fire the whole time, without being hit is a mystery to me.

Part of a letter from Duncan to brother Charles.

I’m sure Duncan had no idea when he set foot on the soil at Gallipoli in the early hours of 25 April 1915 that a century later he’d be immortalised in bronze in the town of his birth.

However at dawn on Friday 24 April 2015 a statue commemorating his achievement was unveiled in Maryborough, Queensland. 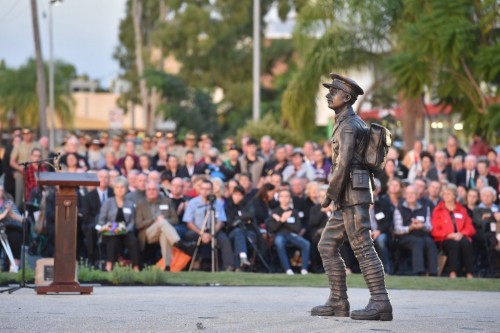 Duncan Chapman was my great great uncle. Born and raised in Maryborough, he was my father’s great uncle and my grandfather’s (maternal) uncle.

Duncan was living in Brisbane (in Albion) and working as a paymaster when he left to serve his country in the war to end all wars.

Maryborough peeps have worked long and hard over recent years to confirm Duncan’s achievement and raise funds for the $60,000 statue. I have to confess I’ve struggled a little with the occasionally OTT fanfare.

Although chosen to be in the covering group; it was pure chance his towboat was the first ashore and that he happened to be in the bow at the time. For this reason I’ve felt* a little uncomfortable with the hero-status afforded him and… I suspect he would be too. 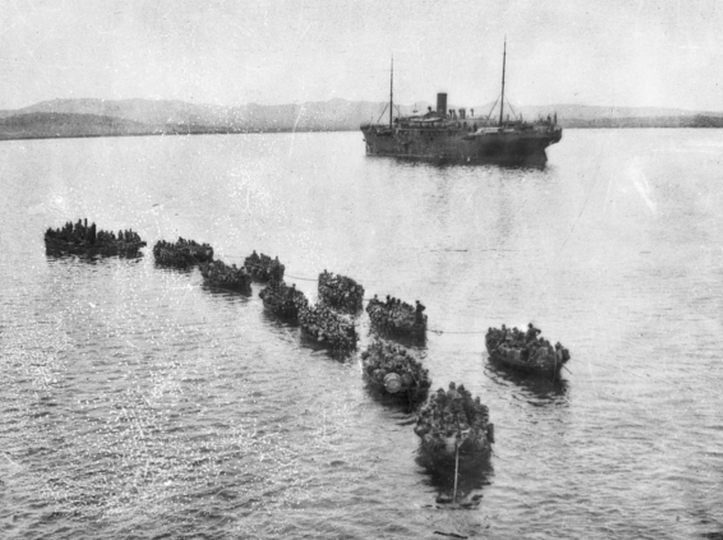 Indeed, comments on the local newspaper’s website indicate others are a bit frustrated that Duncan has attracted so much attention, when MANY young men from Maryborough formed part of his 9th Battalion.

Naturally however, I’ve wondered about Duncan the man. Although he wasn’t married I wondered if he left behind a girlfriend. Or two.

I’ve read some of his letters and found myself thinking I’d like this man who lived 100 years ago. His letters are well-written. I can only assume he was relatively well educated and articulate. He’s obviously overly fond of punctuation and the occasional adverb… so I feel I can blame my genes for my own predisposition in that respect.

I attended the dawn service yesterday for the unveiling of Great Great Uncle Duncan’s statue. Extended family from interstate had travelled and formed part of the official party. Given my mixed feelings I was happy to stay in the background rather than meet his other great nieces and nephews and great-great nieces and nephews.

I was relieved when the service itself however, while honouring Duncan, paid tribute to other Maryborough men who fought alongside him. Many of whom (like so many Aussies) died on Turkish soil.

Despite my natural cynicism I found myself tearing up when I learned that rocks and sand had been provided by the Turkish Government (from the beaches and cliffs of Gallipoli) which were used in the surrounds of the statue. In fact, the sand was fashioned into footprints and set into the concrete to reflect those who followed Duncan across the beach at (the now) Anzac Cove. *sob*

I realised—perhaps for the first time—that it wasn’t really about Duncan or a town desperate for some fame and fortune. The celebration was about what (and who) Duncan represented. It was the war which coined the term ‘digger’ and—although we didn’t walk away victorious, our fighting spirit became part of our national identity. Sure we’re larrikins who sometimes have little concern for authority, but we’re tenacious bastards.

Duncan was promoted to Captain the day after arriving at Gallipoli. Unlike so many of his fellow ANZACs Duncan survived the Dardanelles, serving in Gallipoli until the evacuation in December 2015.

He did not, however return home. Serving with the 45th Battalion and promoted to Major, Duncan died on the battlefields of Pozieres in August 2016, like so many of his countrymen.

** You may recall the clip I shared recently of this tragic episode in our military history—during which time we lost 23,000 soldiers in just seven weeks. Only to gain 10km of ground. If you haven’t watched that video I’d recommend you do**

In that previous post I talked about the futility of war. I realise today is not a time for such discussions and I have great respect for those who’ve fought and/or died for our country. I do believe it’s an opportunity (however) for some reflection.

The local TV news interviewed a former WWII soldier a couple of nights ago. He doesn’t attend ANZAC day ceremonies, he said. He believes the day should be spent educating young people. His lesson: “There’s no glory in war.”