Why is it that (in novels and films) people have to ‘leave’ to find themselves? Perhaps that is the only reason the novel exists. If, for example, Mary Smith discovered a sense of her real self between making the kids lunches and vacuuming, she wouldn’t probably bother to document the journey. But, had she traveled purposefully across the country or the world to stave off her inner discontentedness, well… then she might have a bestseller on her hands.

Coincidentally I came across two of these journeys in a weekend recently.

I read the book Eat, Pray, Love (EPL) for the first time and I watched a rerun of the movie (from book of same name) Under the Tuscan Sun. 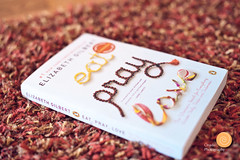 The same morning that I discovered EPL at my local library I came across an article – scathing in its disdain about society’s current search for happiness. Berating our expectation of happiness along with the myriad of self-help type books, the journalist quotes EPL as being a favourite of some Hollywood-types for whom the book is akin to an existential ‘how-to’ guide. It seems fateful then that I venture across the book later that day and borrow it to see what the fuss is about.

I tend to dislike non-fiction. Well, I actually hate it, and usually don’t go anywhere near it unless forced. When I scanned the book along with my library card, I had no idea that EPL was in fact non-fiction, until I read the cover on arrival home. Nevertheless, I decided I could battle on and see how far I could get before suffering disdain equal to that of the journalist or just giving up out of boredom.

I read it in one sitting. And I loved it. I don’t believe it to be a search of happiness – as blithely condemned by the aforementioned journalist. This implies a glib, superficial self-indulgent search for utopia, or something equally clichéd (Edina’s constantly-changing religions in Absolutely Fabulous comes to mind).

Perhaps if someone told me of the book’s premise, I would laugh. OMG…. A middle-aged well-educated woman suffering from an existential crisis goes to an Ashram in India. True, Elizabeth sounds like walking cliché of a divorcee going through a mid-life crisis.

But, to me, her search through the world’s ‘eyes’ – Italy, India and Indonesia, is actually more about her actually discovering her (lost) self rather than a superficial search for happiness or even some self-actualised meaning of life – despite some of her sources of intellectual and spiritual nourishment!

I read an interview with the author of EPL, Elizabeth Gilbert. She was asked if taking a year off to travel around the world to ‘find herself’ was selfish? I wonder about this question. The notion of selfishness implies that our acts negatively impinge on others. As a single thirty-something year old woman, with the finances to fund her journey I find it bizarre that anyone would question her motivations. We don’t question the selfishness of 20 year olds who want to backpack around the world. Why are the expectations of a 30 year old professional female so different? 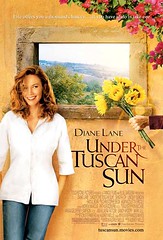 Similarly, Under the Tuscan Sun, features Frances, a bitter divorcee (do I sense a theme?!) who takes off and buys into a new life rather than returning to her old one.

Again it is about a woman trying to find her feet. Trying to find the person she may once have been, but no longer is.

In both the film and book, it takes a crisis for the two women to ‘act’. What does this mean for the rest of us? For those of us not really expecting a life of joy and happiness, but aware of the chunks missing from the jigsaw that is our existence.

Do we need to wait for a crisis? Or is the crisis itself the only reason we venture on such a journey? If there is no crisis, is there no rainbow?

And (crisis or not), is it possible to complete this search as we go about our everyday lives? In between our work, domestic and family commitments? Does this give us the time, energy and opportunity we need to take stock, or do we need to follow Frances’ and Elizabeth’s ‘selfish’ leads and take time out from our everyday lives.

Both of our heroines Elizabeth and Frances, ultimately live happily ever after, having successfully navigated their searches and peeled back the layers of their former lives to rediscover their selves. But, as is so often the case, it isn’t actually the rainbow at the end of the quest that provides them with the answers they seek. It is the journey through which they travel to get there. Frances’ eventual contentment in Tuscany is not arrived at despite the highs and lows during the restoration of her Italian villa, but because of them.

So, in addition to wondering if success is as sweet if there is no preceding bitterness, I wonder now if what we seek comes easily, would it be as fulfilling? Like a math problem, if we are given the answer without actually working out HOW to solve it, we are perhaps no better off than before…