Over 25 years ago one of my best friends accompanied me to a dentist appointment. She hoped to come in with me – which is less weird than it sounds as we’d travelled the hour from Brisbane to the Gold Coast to my uncle’s dentist surgery. From memory we had an early dinner with my aunt and uncle and all headed into his surgery one evening. I was working at the time so I suspect we were working around each other’s schedules.

My friend was intrigued by the idea of being able to roam through the surgery and chat to me while I underwent treatment. Unbeknown to me, however, my aunt had taken my friend aside and suggested she might not want to come in.

I’m sure her words would have been far kinder but essentially she relayed the fact that I was a bit of a ‘wuss’ when it came to the dentist and I might be embarrassed about the fact. 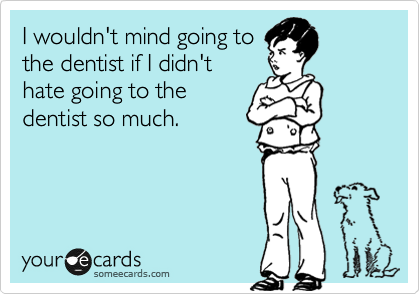 I loved my uncle dearly and when not dressed in his white shirt and wearing a mask he was extremely kind and thoughtful. However, once he donned his gear and started playing with noisy instruments, I was less enamoured.

My aunt explained to my friend that – growing up my father was always in the room with me – holding my hand tightly and distracting me from the torture of what was to come. In fact, on that occasion once settled in the chair my aunt suggested I ring my parents (from a phone near the chair and its scary implements). I gather that hearing my dad’s voice helped calm me.

Sadly my uncle retired over a decade ago and since then I’ve had to make alternate arrangements. And finally – for the first time since my seachange – I visited a dentist in my new hometown. I made my selection based on the fact I’d met a lovely woman at a couple of local women’s business networking functions. We’d also crossed paths on other occasions and one her the dental assistants goes to the same yoga studio I (again) go to. It seemed like karma. Or something.

However my recent visit made one thing very clear…. I am FAR more dentist-phobic than I realised.

My lovely new dentist has a ‘relaxation’ room rather than a waiting room which I thought was a good start. And knowing her helped. However, it still was not pretty cos as suspected I’m in need of fillings so had some sensitive teeth and… on top of that I have a poor gag reflex.* In fact my bacon and egg breakfast sandwich almost reappeared when a plastic contraption was put in my mouth for xrays. 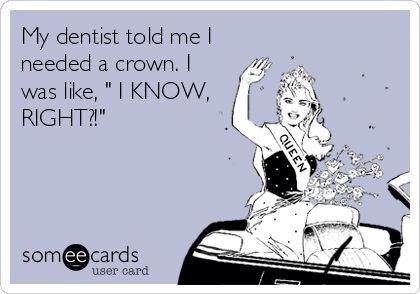 I was briefly sidetracked by how far we’d come in terms of dental technology. I remember the hand-written cards from my uncle which dated back to the early-mid 70s.

However, my new dentist took pictures of my teeth from inside my mouth with a tiny instrument (the ultimate selfie!) – which she then displayed on the TV / computer screen in front of me in the chair. And they did the usual xrays and then some that involved something rotating around my head (which picked up polyps in my nose or sinuses!).

It was all very charming except for the bits that hurt. Which was almost everything else. And… all I had done after the examination was a clean, but I was still so traumatised my dentist offered to get me a stress ball to stop me holding my hands in some sort of deadly white-knuckled vice-like grip.

Of course the worse thing about it all is that I need other work done. Like lots of stuff. I know I’ll get needles to numb my mouth but am starting to wonder if they still have laughing gas?!

How do you feel about visiting the dentist?