I made it back to yoga classes this past week, after getting out of my routine when I went away for a few weeks. Like many such places, the rooms are very nurturing. The studio has lots of soft cushions, the aroma of incense and wall hangings featuring empowering quotes.

I love this one sign in particular – and it seems to be attributed to Buddha, Herman Cain and / or Albert Schweitzer. Whatever. In a first, I made my own meme thing using a sunset from last week (a pic I took on my old iPod!). 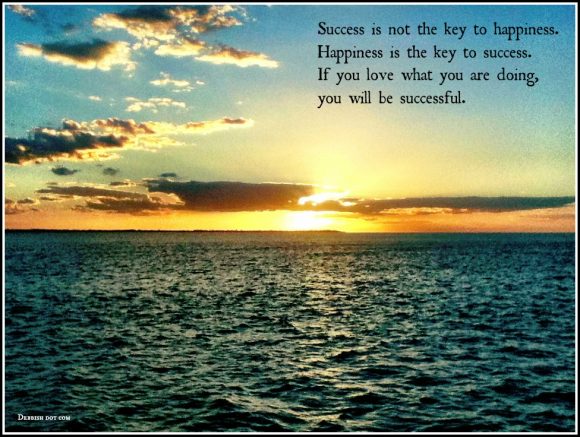 Initially I just accepted the quote on face value. I whole-heartedly agree with the concept. We willingly do the things we love, and we often do them ‘more’, so it’s not unexpected that we would experience more success than when doing things we don’t enjoy.

But, as I’ve undertaken (and undergone) a lot of changes in this past year I decided that I can actually take the quote further. I realised I’ve had to redefine how I see success and happiness.

Success – for me – was about my career and, while not necessarily moving UP the ladder, moving onto more interesting / challenging jobs. It was about paying off my mortgage. It was about having good quality clothes. It was about being able to afford to live in the way I wanted. On a short-term / smaller scale, success was black and white. It was about winning or losing.

Happiness was very often about success. If I won (lost weight or got a job) I was happy.

For me, however, the concept of happiness was fleeting. Contentment was my end goal.

Fast-forward a year and I’ve basically committed to a life that’s more about happiness and contentment than ‘success’ in its traditional achievement-based form. So is Buddha / Cain / Schweitzer right?

Does being happier make us more successful?

So while I struggle to define ‘success’ in my new world, I’m using the only thing that comes to mind: ‘life and living’.

And although there’s room for improvement, I feel like I’m scoring well.

Do you agree with the attribute-less quote about happiness and success?
How do you define success?