Those following my blog for some time may recall my foray into self-love last year (no sniggering please!) through my belated participation in a 30-day challenge issued by inspiring US blogger Tina Reale (from Best Body Fitness).

Tina and a few other bloggers often write about topics that I tend to ruminate over for a while before eventually offering my thoughts on the issue. And… a recent post of hers has similarly been playing on my mind since I read it a few weeks ago. And it’s particularly timely as I publish this post – on the day which USED to be weigh-in day on my old weight loss program – a 12 week body transformation challenge.

You may be aware, I’m a huge social media fan. I mean, I’m not as avid as some (am yet to delve into Pinterest and the like) – and recently wrote in my other blog about my binge-tweeting habit, given the minimal access I have to social media during the working day; but I must confess, I like connecting with others in 140 characters or less.

Which brings me back to Tina’s post about social media and its relationship to our health and fitness goals. As I read through her list of positives (support and accountability) and negatives (stress, bizarre trends which become the norm and the comparison trap) I found myself nodding in agreement. I mean, HELLO?! Do I feel like crap when I read about others running 10km, when I can’t even run 1km? Yes! Do I feel lazy when others are doing double training sessions or participating in some burpee or planking challenge? Hell yeah!

One of the reasons I actually pulled out of my former weight loss program was because it became a bit overwhelming – the focus seemed to be more on the program itself, than what I wanted to get out of it. I don’t want to sound overly critical – I’ve written a few times about the cult-like following the program has in some respects – although I know it achieves results and some participants are wedded to it for life. But it can be so ‘in your face’…; and some of that (I believe) is solely a result of my (and others’) use of social media to engage with other participants.

I have a habit of checking Twitter and Facebook when I wake in the morning – before I even stagger leap energetically out of bed. And (while I usually have plans to exercise at lunch or after work) I start the day feeling like a big fat failure because at 6.30 or 7am, others have been up for 3 hours running 20km or half marathons or similar. 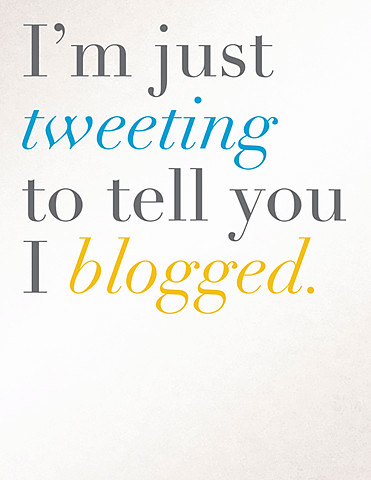 Even though I’ve quit that weight loss program, I’m (happily) in contact with those who are continuing, so each Wednesday morning I’m confronted (first thing) with everyone’s weight loss results. And, I’m reminded of how I lay in bed last year filled with a sense of dread and depression as I read everyone’s news. I’d eventually get on the scale myself and if I’d had a good loss, I’d be ecstatic. Until I read of others’ results that is… and then I felt envious. And angry. ‘Braggarts,’ I’d think to myself about those reporting big losses each week.  (And yes, I know that’s completely irrational and not true!)  And naturally I only focussed on those who had lost more than me, not those who lost less. To them I sent comforting ‘don’t worry’ tweets; unable to be that generous to myself!

I’m conscious that once upon a time we would have no idea how people all over the country did at their weigh-in, IMMEDIATELY AFTER their weigh-in. I mean, how would we have shared that information before the damned (though now desperately-revered) World Wide Web?!

Although, of course I have the option of avoiding Twitter (and Facebook) on a Wednesday, or avoiding it completely. I mean, I DO realise it’s all self-inflicted: I fall into Tina’s ‘comparison trap’ because I’m a competitive bitch who always wants to ‘be the best’ or who wants to ‘win’.

I do, however, also realise that my frustration is AGAIN being directed at the wrong target. (Twitter, other tweeters, other dieters and the like!)  Even before Facebook and Twitter (yes youngsters, such a time DID exist!) I did Weight Watchers and used to chat to another girl at my meetings. I quite liked her and we met for an occasional walk during our lunch break. It was fine while I was doing okay, but as I started to flounder I found myself less enthusiastic about sharing my results each week – resentfulness creeping in as she continued to succeed. (Yes… I am indeed a biatch!)

So it seems that AGAIN  (like my post about the wretched bathroom scale) I’m shooting the messenger. It’s not the fault of Twitter or Facebook that they can make me feel like crap; and frankly much of the time, they cheer me up.

As Tina suggests, they offer me connections I might not otherwise have had. They offer me virtual friends with similar interests all around the world. And they offer me an easy way of keeping in contact with those I just don’t get to see often. In reality, people who read this blog know more about me than some of those I consider to be my best friends, but who I just don’t see much of nowadays.

Another well-known US blogger, MizFitOnline, left a comment on Tina’s post, suggesting that social media is indeed a double-edged sword. And it’s true. On one hand, I receive a HUGE amount of encouragement from my online friends, and also feel a sense of accountability or obligation (in a positive way). But on the other, my world is shaped by what I read…. I started a running program, though I hate running because EVERYONE else runs and they love it. How do I know that? I read it on Twitter. Everyone else is super-motivated, participate in ridiculous challenges and their commitment never wavers. How do I know that? I read it on Twitter. No one else eats chocolate or chips or the like when they’re trying to be healthy. How do I know that? Because I DON’T read it on Twitter.

I haven’t quite worked out how to get the best out of social media, without also the worst. I suspect it’s human nature for us to compare ourselves to others and that even the most sane do it. But I’m hoping that the therapy I’ve started will help me deal with my need to only either ‘win or opt out’ and to avoid constantly feeling like a big failure. But until then I’ll just have to focus on the positives!