In my diet blog I often talk about past binge-eating habits and my (*ahem*) somewhat obsessive nature. Any over-eating though, usually takes place at night or on weekends, my workplace not being conducive to devouring a packet of corn chips or inhaling a bag of caramello koalas.

Similarly, my inability to access social media accounts (Facebook and Twitter) during the day, is resulting in some post-work binging, and I can’t decide whether or not it constitutes socially-acceptable behaviour. (ie. I only care/engage when I’ve got time to care/engage.)

I must confess at this point that my diet blog and associated Twitter account – which WERE my ‘hobbies on the side’ have become my primary blog and Twitter account. Not attached to the ‘real me’ in any way (although I am thinking of ‘coming out’ as it were) I now spend most of my time using that Twitter account and interacting with followers and strangers alike.

My workplace doesn’t allow access to Facebook or Twitter, or even web-based email accounts – the latter for security purposes. As a result a couple of times during the day (only once or twice – because I am a dedicated public servant. Well, actually cos I’m prone to guilt-ridden angst if I think I’m being slack!) I check my private email account and while playing with my iPhone phone I scan Twitter and Facebook for any news or updates. As a result, my daytime access is minimal. And it’s almost impossible to ‘engage’ when I’m only on there for a minute or two at once.

I do partake however, in a Twitter and Facebook binge-fest during my commute to and from the office for a 30-50 minute period every day, which I think is almost akin to ‘caring only when I have time’. And I feel like a bit of an interloper on the train ride home, as I enter conversations midway through and have to scroll back through tweets and updates to get some context or find out what I’ve missed. Again, it’s hard to engage AFTER the event. And like someone who can’t join the cool kids’ table at school, I feel I’ll remain on the outside looking in while my access is so hit and miss; and when others have been tweeting to and fro all day.

Once home of an evening, despite having free time, I find I still can’t keep up… only sitting at my desk briefly to schedule tweets and check updates before disappearing to bathe, cook dinner and watch TV; returning at the end of the night to draft and edit blog posts or pay bills.

Given that I sit at a desk all day, I am not necessarily keen to sit at one all night, so I tend to lounge about in front of the television for an hour or two and this is where I am stumped….

SO many people on Twitter and Facebook post CONSTANTLY. And they often do so while they are doing other things (well, at least I assume Twitterers and Facebookers do other things. I mean, it’s not like we are talking about World of Warcrafters here!). People often tweet about TV shows. I’ve tried that with my iPhone but it takes too long and (I’m of that age where) I have to keep removing my glasses to see the phone’s screen and then put them back on to see the television. Perhaps others have iPads I’ve postured; something that they can sit on their laps and tap away on during ad breaks or boring bits. Or perhaps they’ve got excellent eyesight and don’t have the middle-aged eyesight issues.

When I bought my Macbook Air at Christmas I had visions of myself sitting and ‘live’ tweeting to a captive audience (aka my Twitter followers) about whatever I was watching. I’d imagined sharing insightful and witty repoirtee with other fabulous and interesting people – thereby offering fulfilment I don’t get from my otherwise mundane life. (Just joking! Sort of.)

But it doesn’t work. It seems, while I’m a multi-tasker in much of my life, I’m either watching something on television, or not watching it. Sure, I could attempt intermittent two-minute binge tweeting during an ad break rather than the oft-utilised channel-surfing, but again it seems sporadic and akin to firing off a machine gun then taking cover for the next 10 minutes, until I’m ready to fire again. 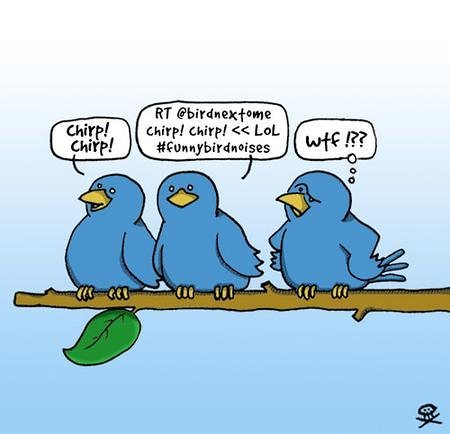 My minimial access to Facebook doesn’t worry me as much. I rarely have ‘conversations’ there. I just post obviously-interesting things about my day (no, not my bowel movements, although I’m sure my gazillions of friends are interested in what I eat, or what exercise I’ve done!).

It’s Twitter I struggle with. I live alone, so have no one to turn around to and say, “Oh my god, what did Poppy Montgomery do to her face?!” for example. Instead, this would be something I’d tweet. And then of course there’s the social intercourse: the toing and froing with complete strangers about both vague and intimate details of one’s life. And frankly… comments starting with “I told you so…” are a waste of 13 of your 140 characters, so there’s less chastising and a lot of swearing. Which suits me fine.

I don’t want to spend my days on Twitter, but I want to be able to keep up in some shape or form. So… what I’m wondering is, how do others do it? iPhone constantly in palm of your hand; iPad hung around your neck for easy access; starving kids and week-old food festering away in the background as you sit at the desk?

Tweeties…. How DO you do it?