Just when you thought it was safe to go onto the world wide web, I (re)appear… *cue menacing Jaws-music – ignoring copyright restrictions*

Yes it’s true. I’m back. Here in the flesh. Or not. I mean I’m here, virtually – in pixels or similar. As for where I’ve been, well… more on that later.

It’s been 3-4 weeks since I’ve shared my reading and blogging escapades, so I have read some books – which probably won’t surprise you – but I’ve already reviewed them all, so will skip straight to those.

There have been no ‘personal’ posts since my last Sunday check-in, just book reviews. And unlike time (as August nears its end, when it seems it only just started), my reading and reviewing slowed a little. However, you may want to check out:

Under the Harrow by Flynn Berry – in which a woman develops an unhealthy obsession for finding her sister’s killer
The Falls by B Michael Radburn – a thriller set in Australia about a serial killer who’d previously gone undetected
It Ends With Us by Colleen Hoover – which even I loved… despite the lack of psychopathic serial killers, although…. #kidding
You Will Know Me by Megan Abbot – about an elite gymnast and the parents who’ve given up everything for her – and what happens when their dreams are threatened
Sunset Shadows by Bronwyn Parry – an Aussie novel of romantic suspense which gets the balance right for this lover of suspense
Curious Minds by Janet Evanovich and Phoef Sutton – somewhat OTT and could use a good edit, but still fun
The Last Photograph by Emma Chapman – about a photojournalist whose life was changed by the Vietnam War and its implications for his family
Only Daughter by Anna Snoekstra – a woman in trouble pretends to be the long-missing daughter of a devoted family, only to wonder what happened to her predecessor
Miss You by Kate Eberlen – an enjoyable read which reminded me of my Maeve Binchy reading period.

I’ve had a few more reviews published in the newspapers as well…. 😉

Well… what didn’t I do? Other than read and blog, obviously.

In all honesty I can’t claim I’ve been stretched-to-the-limit busy. But I’ve just had stuff on and am very conscious that a key part of blogging is reading and commenting on other blogs and didn’t want to write my own posts with the expectations of readers if I wasn’t going to do much blog reading myself. As a result I’ve missed HUNDREDS of posts in the last 3-4 weeks and I apologise to the blogging community for that.

But, back to my explanation… the sale of my apartment and purchase of my new house goes through this week. There have been a few glitches with my sale, which have almost driven me insane. The buyer lives overseas and things obviously happen differently there. Plus a difficult person here has influenced her and she’s had rather untoward requests – like a discount for example – to move the washing machine into a different room which has no water or electricity (and isn’t even sealed). It makes no sense but it was a final-hour thing and I really had no choice.

However… I’m really excited about my new house as I’ll have my own study and MORE SPACE. Of course I’ll miss my views and location but it will be nice to have this new start.

In the meantime however, I am packing.

On the health front, I’ve recovered well from the surgery I had about six weeks ago but it tired me far more than expected and I’ve struggled a little. However I’m continuing my water aerobics at the gym when work and packing and other stuff permit!

Once I move (five sleeps, but who’s counting?!) I want to focus a bit more on my writing again. I’m going to attempt to blog daily in September and might participate in NaNoWriMo – National Novel Writing Month in November. The last 4 or so months have been chaotic and occasionally revolting so I’m keen to start afresh.

As for this week… there will be some reading, but I’m also working and have my move scheduled over a two-day period.

I’ve checked my chronologically-sorted TBR list and have a very bad feeling I’ve already packed the latest release by Gayle Forman (Leave Me) I was planning to read next, so will jump forward to The Easy Way Out by Steven Amsterdam and Sophie Hannah’s new Hercule Poirot – Closed Casket. 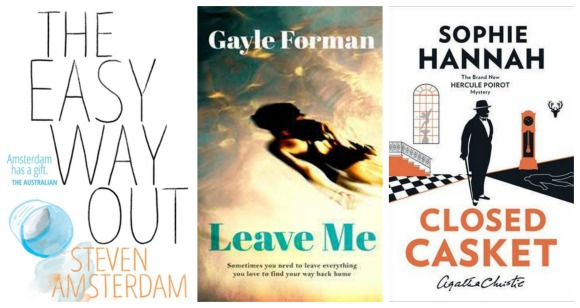 And that’s it for now. I promise I’m mostly back in the game and I’ll get around and read other blogs and rejoin the land of the social media overusers.

Tell me… what have I missed over the past 3-4 weeks? Any highlights? Or lowlights?

From memory (joking) I’m linking up with Deep Fried Fruit for the Lovin’ Life Linky; the Caffeinated Book Reviewer for the Sunday Post; and The Book Date for ‘It’s Monday, what are you reading?’