Now…. I’m not usually one to own up to being wr-wr-wrong, and it’s rare that I am confronted by my own prejudices (generally believing anyone capable of anything); but that is exactly what happened a couple of days ago.

I could possibly blame the ungodly hour, as I sat slouched on a hard metal seat at a train platform waiting for a 6am express train to speed me back home after Christmas with my mother. Or I could blame the trauma of having my early morning diet coke spill throughout my satchel thingy and soaking everything in its path, although thankfully only slightly dampening my (brand new) Macbook Air. Either way… I discovered (yet again) on the trip that the internet connection is very hit and miss throughout regional Australia and the inability to pfaff about on Facebook and Twitter while awaiting the train meant that I was forced to entertain myself by examining my fellow train passengers (well, those at the end awaiting the business class carriage!).

And in doing so, I smiled to myself at an older woman nearby clutching her bag, as if one of the other passengers was going to snatch her knitting or Women’s Magazines from her at our first opportunity.

So, it was with some surprise that (once on the train) I watched her delve into the ugly patchwork bag pull out a Kindle, fire it up and start expertly flicking through controls to (presumably) open her latest book. I mean, WTF?! What’s the world coming to when the grey-haired brigade are reading eBooks and playing Suduko on iPads and the like?!

I must confess that I’m a bit behind the times when it comes to online ‘reading’. I’ve raved on a bit about my new Macbook Air; am a ‘mad’ blogger; and rabid user of Facebook and Twitter (etc) on my iPhone… but I’ve only downloaded one book EVER (which was something I won from the delightful, Rebecca Bloomer).

The only other thing I read online (which is even more embarrassing) is the draft fifth instalment  (Midnight Sun) from Twilight author Stephanie Meyer, who released an electronic copy of the first few chapters after they were leaked; and I must say I found it most perplexing that I couldn’t print the bloody thing and had to read the PDF document on-screen!

So as digital literature garners more and more support across the globe, I can’t help but wonder if I’m behind the times when it comes to eBooks and readers and the like.

Although… I must confess, the bigger question is: Do I care?  I mean, I’m obviously not (COMPLETELY) technologically unversed. And I don’t think I am e-Book-phobic; although I’m sure a well-train psychotherapist could uncover a few neuroses through only superficial probing of my psyche! However, I am loath to move away from the tangible hard copy option to something more virtual… and I’ve decided it’s something to do with the comfort that books offer me which I think comes from their physical presence. 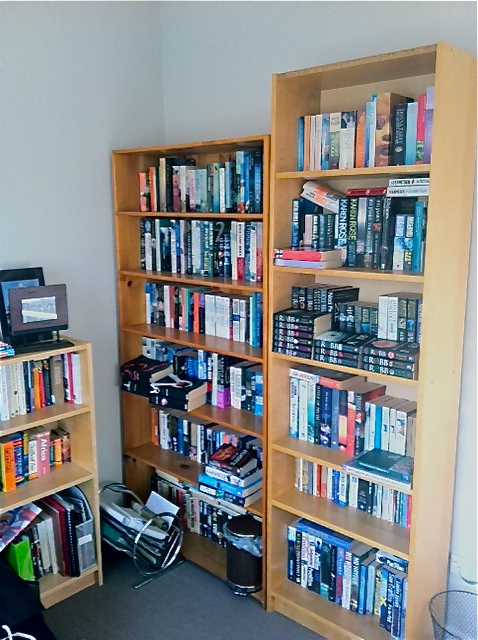 Over the years I’ve gone through stages where I’ve purchased many-a-book although I’ve cut down considerably over the past 10 years. After moving back to Australia a decade ago I made the conscious decision to reduce my book-purchasing habit in favour of paying the mortgage! And I’ve been pretty successful; only buying books I really really want; those which are part of a collection; or something a tad crappy but allowable because I’m on holidays. I’ve done two big culls twice on moving, although even then I’m reticent to get rid of things that I really shouldn’t be seen dead with. Just because… well, because… they’re mine.  But don’t get me wrong; I’m not a hoarder, in fact my mother will vouch for the fact that she’s practically forbidden from buying me ‘stuff’ as I like clean surfaces and am a bit of a minimalist in nature.

I read a lot. Like everything else it’s something I occasionally do quite obsessively racing through a half-a-dozen books a week. 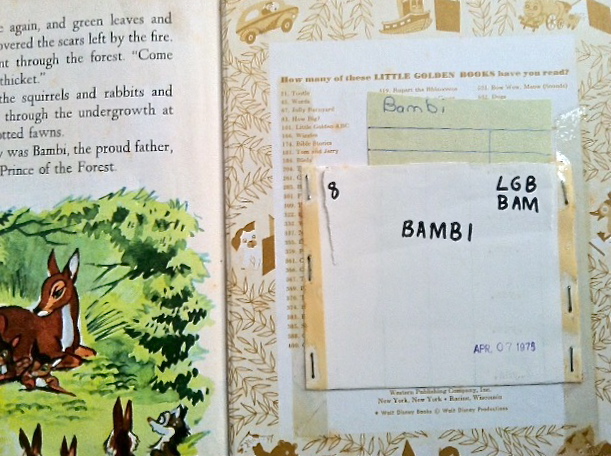 I’ve always loved reading and both my brother and I had HUGE collections of everything from Little Golden Books to Trixie Belden to Enid Blyton to the Sweet Dreams teenage romances (well, that would be my collection rather than his). And, even then I was a tad obsessive about my books and I suspect it was more the need to ‘keep them close’ rather than any librarian aspirations that had me set up a borrowing system used by local libraries at the time, for when my neighbour wanted to borrow a book.

Many who favour hard copy books over the electronic versions talk about the smell and texture… but it’s hardly like I’m talking about first editions and leather-bound tomes here (as I glance at my myriad of paperback novels occupying my bookshelves!).

I joke that I do most of my reading while lolling in the bathtub – an environment not exactly conducive to non-water-proof electronic goods.  But, in all honesty, I don’t think that’s what prevents me from downloading the virtual versions.

I think it’s because my books are ‘precious’ to me. Even the crappy ones, as they offer a glimpse into my life.

While at University with short bursts of available time I devoured Agatha Christie and the like. Just after Uni and as a youngster, I liked Patricia Cornwell (before her books really started to piss me off!), Elizabeth George and Thomas Harris. Then in the early 90s there was my spy and espionage phase and I still have almost all of David Morrell’s and Robert Ludlum’s collections (and a few John Le Carre) from that era – which I delve into every so often for something different.

There was a brief foray into Anita Shreve, Jodi Picoult, Alice Hoffman before going through my “Literature-with-a-big-L” phase in the late 90s and early 2000s. And no, I don’t mean Dostoyevsky and Tolstoy. Rather just those books you find on the ‘You Must Read’ lists rather than the Oprah or Women’s Weekly Bookclub list.

And since then it’s been whatever takes my fancy but again I tend to latch onto an author and read everything they’ve written while waiting on their next installment.  I’ve already blogged about a few fetishes, including Jane Austen, Robert B Parker and JD Robb, but there’s also Martha Grimes, John Sandford, Karin Slaughter and the like. I even seem to have accumulated quite a few James Pattersons though I will swear to never having bought any! 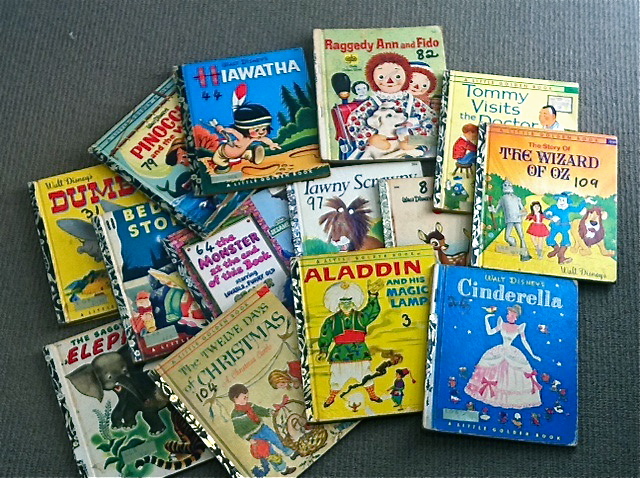 SOME of my Golden Books

Books offer me solace in the way certain television shows or movies give me comfort. There are many I’ve read again and again. In fact I can see similarities to my blog reading habit which I was describing to a friend recently. I explained that there are some I read because the content is of interest to me. And then there are others that I read because I just LOVE their writing. They could be writing about anything… I don’t care… I will read it anyway.

Perhaps things will change and I will be ‘turned’ into a lover of the electronic word… or perhaps I will adopt some hybrid of the two whereby I download things I want to read and buy books I want to keep.

However at the moment, having my books in a room upstairs or down the hall gives me a level of comfort I cannot explain. It’s not like I visit them, stroke them, or worship at their altar (*ahem*). But, ask me to part with them and it will be like a little piece of me has died.

“A room without books is like a body without a soul.” ~ Marcus Tullius Cicero