I was sharing the Twitter handle (linked to this blog) last year when I got a surprised look, “Oh… that’s you? You look different than I expected!” 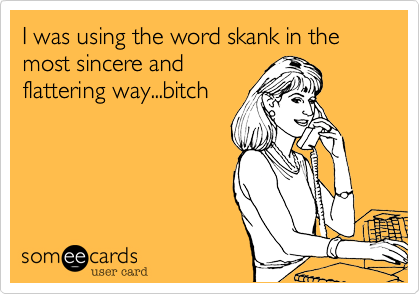 To the unsuspecting the name is a bit weird. Like something I made up. And as a fat, frumpy middle-aged woman, I suspect I don’t look sufficiently skankish.

But the story behind the name is far more mundane. Before this blog moved to its own domain name it was hosted elsewhere (both WordPress.com and Blogger, for those in the know). And because I’m so clever and witty I wanted the title to be a play on words.

“Write About Now” was the intended name. But… as I’m such a cliché the name had already been taken. Eventually I discovered I could still call my blog page that, but… I would have to come up with something different for the domain. And after some Googling, Rockafella Skank was born!

“Write About Now” had popped into my head, thanks to the lyrics…

The song in question is by Fatboy Slim. I’m not a huge fan of his music but LOVE many of his clips (Praise You and Weapon of Choice come to mind!). And what I didn’t know, was that the song is actually called Rockafella (or Rockafeller) Skank. So, although it only makes sense to Fatboy Slim fans… that’s where the original blog domain name and its accompanying Twitter account came from (plus the Twitter handle @Debbish had long gone!).

Debbish was the natural title for this blog as it is a nickname I’ve had for many-a-year. It’s not something I call myself, but when at University my friends and I (well, particularly yours truly!) had the habit of adding ‘ish’ to the end of every word – whether it made sense or not. (What can I say, I was a teenager?!). To this day two of my closest friends call me Debbish.

Another habit from my University years was that of adding ‘Schm’ to the front of words. You know…. “Boys, schmoys.” Or “Money, schmoney.” Over the years that predilection has mostly disappeared but I still do it if I’m trying to wave off something as unimportant. 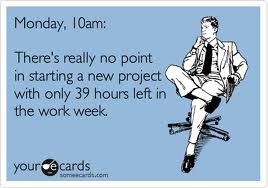 So there you have it, some scintillating insight into my mind – not entirely warranted this early in the week – but you are most welcome ;-).

PS. If you haven’t seen the Praise You or Weapon of Choice music videos I’d encourage you to watch them – via You Tube or the links above!

PPS. You can attend the Problogger Training Event virtually – from the comfort of your own home – and if you buy a ticket by clicking here, or on the flashing ad in my sidebar, I get a commission! 😉