I’ve now shared a few posts promoting controversial debates. Such as global warming and peace in the Middle East. Just kidding. I’ve pondered whether you’re a shoes-inside wearer, like pockets in clothes and think soup is a real meal or not.

And there was the earth-shattering discourse on whether you are a PJs or a nightie kind of person.*

I have plenty more of these dilemmas up my sleeve because, as a keen purveyor of the human condition I tend to ponder whether my thinking and behaviour is normal, or if I am weird and others… not-weird.

And today’s topic is unpacking. Or more specifically unpacking IMMEDIATELY.

I overnighted with my mother after we travelled to Brisbane for Christmas recently. And as is her way she unpacked her suitcase on arrival home. Before doing almost anything else. I should mention it wasn’t to separate her washing or anything as it was in its own separate bag. So… she just put her clean clothes and toiletries away and her suitcase into the cupboard. LIKE A FREAK!!!!

I, on the other hand, do not unpack immediately. In fact, I rarely unpack at all. I tend to leave my suitcase or bag open and grab things as I need them until it’s almost empty and the sight of it on the sofa in my lounge room or floor of my bedroom drives the ‘neat and tidy’ me insane.

Because I often overnight at my mother’s (who lives in a neighbouring town) I usually just take a shopping bag or tote bag with a change of clothes, my medication and books. So that usually sits on my sofa half-emptied until the next week when I refill it for my next trip. Rinse repeat. 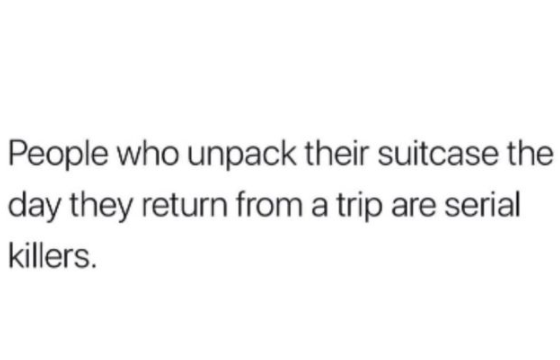 Although this meme is hilarious I know better than to assume either one of us is ‘right’ and though I most certainly am the more sane and sensible one, I realise that others usually fall on either side of the argument. To unpack or not to unpack… that is the question.

So, where do you lie?

PS. I was tempted to broaden this to an ‘unpacking the dishwasher and laundry basket’ debate but realised that could get ugly!

* As an aside… on the issue of bedclothes, most came down on c) None of the above option.