The Biggest Loser started here in Oz over a month ago. It launched to much TV-land hype and blogosphere disdain. As well as the usual ‘the show is too fake, sets up false expectations and features unsustainable approaches’ bagging, it got a caning for its promotional approach. (For my international readers I should note: bagging and caning = Oz words for criticism. I like to think my blog posts are as educational as they are informative. *Sarcasm*).

Touted as The Biggest Loser – Singles, all of the ads featured the contestants moping about being single and how they won’t find love until they lose weight. Yadda, yadda, yadda.

Many viewers (and non viewers) criticised the show for implying that no one likes a fatty. Even I cringed each time I saw the ads. HOWEVER I cannot talk, as I say the exact same thing. Not about others – cos there are a lot of overweight people in relationships and I’m always gobsmacked when their partner is vaguely normal. I mean, how on earth did they find someone to look past the outer layers? I’ve just always assumed that I’ll remain single while I remain overweight.

That aside, I haven’t actually watched TBL for a few years, although I occasionally tune in just for the finale in the hope that the shocking makeovers motivate me to get my act together as well. And by then I don’t know any of the contestants and have no vested interest in who wins. It’s just all about the changes.

The show itself no longer holds any interest for me. I hate the competitions and hate the unrealistic environment. That’s not to say I wouldn’t want someone to lock me up and force me to lose weight. I’m pretty sure I’ve prayed to be knocked unconscious for a few months to a similar end! And… I did pay a nice sum of money to go to a Biggest Loser-style fat camp a few years ago.

However, while I know the show’s about breaking people down and building them back up, I really just can’t stand to watch it. On top of the annoying contestants and competitions – it also makes me feel bad that I’m not achieving what people there are achieving. Ridiculous as that sounds.

However – unfortunately on Friday night I caught the end of the show which featured an interview with someone who’d been voted out. It was one of those check-ins a few weeks later to see how life ‘on the outside’ was going. 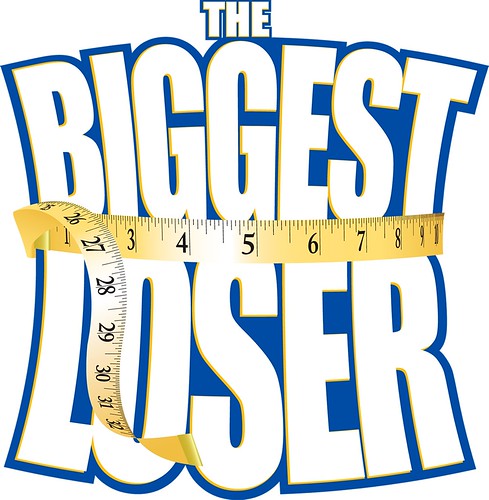 After I picked myself up from the floor, I had to remind myself that this THIS IS A COMPETITION. D-oh! I thought my old weight loss program’s expectation of six days a week of exercise (burning 500 calories a day and 1000 on Saturday) was unrealistic.

I mean, I know in (the) TBL house contestants do a ridiculous amount of exercise. My fat camp (based on that concept) involved 3-5hrs of exercise each day and consuming 700-900 calories. Completely unsustainable in the outside world if one is to have a life of any kind. And yet this girl IS in the outside world – supposedly easing back into ‘normality’ I would have thought. And yet, she’s doing five fucking hours of exercise a day! (And yes, I do swear more when I’m gobsmacked!)

She then showed her food consumption to a doctor assessing her biological age (or something; I was channel-flicking by then as a result of my frustration). I almost gagged. Now I know that I am a bit weird when it comes to greenery, but her three meals included half a forest and a couple of tiny bits of white chicken and fish flesh.

How long will this person be able to eat like that?!

When I left fat camp, the owner suggested we continue consuming minimal calories and over-exercising UNTIL we hit our goal weight; and then ease off, which – he said – is what he did (having been on the show himself).

I realise people go on TBL to achieve results and so I don’t blame this girl. I don’t even blame the show. In fact I’m not even sure there’s any point to this post other than me having a rant.

I’ve been on some stupid diets in my time. I’ve yearned for quick results on many occasions. In fact, I can’t promise I won’t be swayed by a convincing ‘magic elixir’ even now. I can understand anyone wanting a quick fix. But even I wasn’t prepared for my reaction to the program last week. For some reason it was particularly confronting. The girl’s efforts reeked of desperation and sense of urgency intimated something. Does she want to look great by the finale? I wondered. Does she hope to get back onto the show by having lost a lot of weight on the outside? I wondered. Or, does she want to win the money? I wondered.

Perhaps the show’s paying for 5 hours of personal training a day and she doesn’t have a job. Or maybe she’s under pressure fromthe show’s producers. Who the fuck knows?! And maybe she – and others on the program – will keep it off after the cameras and fans disappear. Perhaps – like so many of the previous contestants, she will become personal trainer and be committed to a life of clean eating and exercise. And if she, or her fellow contestants do… good on them!

BUT… if I do sit down to watch the finale, I will HAVE to re-read this post to remind myself of the bizarre lengths these contestants have gone to in order to drop huge amounts of weight in a short time as I already know I’ll be comparing my own pitiful efforts to theirs. And I don’t want to AGAIN feel like the bigger loser!