It was the first time I had paid to go and see someone who was kinda famous. Actually, I must admit that I didn’t even pay. I possibly wouldn’t even have gone if more effort was required, but that says more about me than the event itself.

The stars and planets aligned as I received an email from the Queensland Writers’ Centre in which my local bookshop, Riverbend Books (Bulimba), offered free tickets to hear Bruce Beresford speak at the launch of his new book, Josh Hartnett definitely wants to do this… As it was early, I was the first caller and easily secured the tickets. I never win competitions or get freebies, so I decided it was all fate and revelled in the idea that I would become some highly-evolved erudite attending only the most cutting-edge of events on the Brisbane cultural calendar.

As I queued for my book to be signed after Bruce’s formal presentation I wondered if I should feel at all pathetic or groupie-like. Should I have been embarrassed by lining up to have someone scrawl their name on my (just-purchased) $40 book – even if he was the author (and kinda famous)? 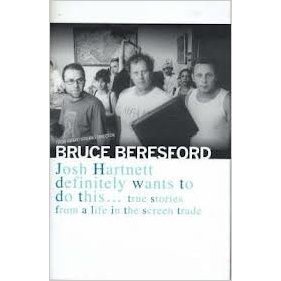 My lack of guile wasn’t because I was above groupie-like behaviour. In my youth I had a thing about athletes. Though, there was an ill-advised crush on Tom Cruise during his “Top Gun” (pre-sofa-jumping) era. In my own defence, I was a teenager who didn’t know better. I blame rampant hormones and general ignorance and, there shall be no further reference to that part of my life!

Besides, there were far more embarrassing fetishes. Cricketers, Hansie Cronje and Kim Hughes (who, I hear anyone under 35 ask!). Boris Becker (yes, the boom-boom jokes were indeed funny in 1986!); and god I think there were even a time when Pat Cash was of some interest. I was still in a teenager at that stage so the insanity plea (above) still stands.

Alas, I have digressed. But I did wonder what to say to Bruce Beresford. I didn’t want to sound like some star-crazed madwoman. I wanted to come across as some woman-of-the-world, much accustomed to meeting the intellectual elite. However, being a book-signing virgin I hadn’t realised I would not even get the chance to tell Bruce himself what I wanted in my book, but some harried helper alongside the queue, who took our words – and our dreams – and scribbled them on a little square yellow post-it note. Being the literary genius that I am, I had gone with, “To RFS, from Bruce”. So, when I reached the man himself, he simply copied my poetic prose onto my book. “Um, thanks,” I fearlessly mumbled as I moved on as quickly as possible.

So much for me explaining that my interest in his book related to how he turned diary entries into a book! I want to do something similar with letters. I think I had envisaged us ‘connecting’ on some intellectual plane; compare notes and eschew the meaning of life, and well, the universe. Okay, so I didn’t really think that, but I did think I might say something vaguely intelligible which would capture his interest. My lack of verbal capacity obviously wasn’t because he is a great idol of mine. He wasn’t (and isn’t). I guess it is still the ‘them’ and ‘us’ which comes from meeting those who have some iota of fame, while the rest of us wallow in obscure mediocrity.

What I enjoyed about Bruce’s presentation was that it didn’t appear to come easily to him. I guess I thought of him as someone fairly famous who was accustomed to the spotlight and so I expected something smooth and sanitary. He spoke for approximately 30 minutes and it seemed as if he struggled to find things to speak about as he jumped from topic to topic. I wondered if he had planned what to say. It didn’t appear so though he did occasionally refer to some scraps of paper before giving up on them entirely. I imagined a wife or manager behind the scenes, nagging him all day to prepare his speech. He seemed the sort to rebel against any such goading. He was, however, far more comfortable during the Question & Answer session. There was a good crowd at the event, and I suspect most were there to see Bruce the Director, rather than Bruce the Writer as all questions related to his film work.

I have since read Bruce’s book. I enjoyed the anecdotes and he is obviously an intelligent man who thinks and writes with much élan. The book however, is pretty much a collection of experiences over a two year period. It features references to friends, such as Barry Humphries and acting luminaries, Russell Crowe, Cate Blanchett and, of course, Josh Hartnett. And, it isn’t for the faint hearted or those not up for some salacious gossip! During his pre-signing presentation he quipped that lawyers had spent a significant amount of time pouring over his words.

Of most interest was how the whole film and television industry works. An industry of much uncertainty. Survival of the fittest in a world where money reigns supreme and those perceived to be money-makers (the ‘name’ actors) can be in possession of minimal intelligence but much power.

I read an interview in which Bruce commented that his daughters and wife remarked on the amount of time he spends (in the book) referring to women he came across. I think I would have (indeed) been somewhat chagrined about the reflections if he was my father. While not lecherous, he spends an inordinate amount of space contemplating the women he met, many of whom he was compelled to describe in enthusiastic detail!

I found the book easy reading. I didn’t, however, find it hard to put down – which in my world equates to a good book. Though there was a need to remember who-was-who in Bruce’s life, I was able to read it in chunks over a week as my bus crawled to and from the city each day. I happily pulled the book from my work satchel each time I boarded the bus. It interested me enough that the travel time passed without me being overcome with bus-rage which is quite an achievement.

Through Josh Hartnett definitely wants to do this…, I had a glimpse into Bruce’s world. A world I don’t think I ever wanted and now, one I don’t envy, despite the strange fetishes and bus-rage threatening mine!

I attended the Book Launch, hosted by Riverbend books, at Customs House in Brisbane on 9 August 2007.

*Josh Hartnett definitely wants to do this… true stories from a life in the screen trade.
Bruce Beresford. HarperCollins Publishers. 2007