Ads for the Aussie TV show Offspring have been appearing on our televisions for a month or so now and I gather it will soon return to small screens around the country.

But I won’t be watching. 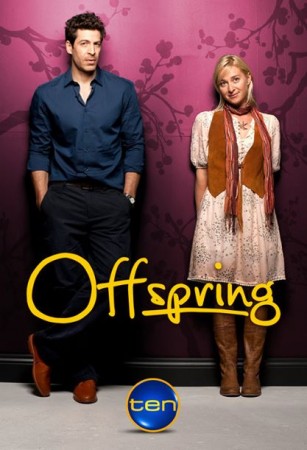 And no, it’s not because I’m pining for the loss of much-loved Patrick (killed off last season in case you didn’t see it or have no idea what I’m talking about). In fact, I must actually admit I haven’t watched the show since the first season when the delightful Don Hany (Dr Chris) was key character Nina’s love interest. And even then it was a challenge.

You see… My issue was (sadly) not really with the show, ie. It’s not you, it’s me. One of my (many) foibles, issues, idiosyncracies. Or worse. Something which makes me sound petty and pathetic – and something I need to get past to become a better person.

For my overseas readers or those not-in-the-know, Offspring features unlucky-in-love Nina Proudman. An obstetrician whose life is ‘apparently’ a bit of a mess. She has a (ummm) challenging family and is prone to doing and saying silly things. Which (sadly) many of us do. We’re privy to her thoughts throughout the show so we know exactly what nonsensical and irrational ideas and notions pop into her head.

However… she’s attractive, earns a good salary AND has been in love and married once already when we meet her in Season 1 (albeit to someone slightly psychopathic)! Although I really liked Nina (and actress Asher Keddie) I found myself sitting there, wondering why I should cheer her on to find love a second time. Jaysus… some of us are still waiting for Mr Right #1 to come along. And… she’s on her second. Well… as her (Season 1) love interest Dr Chris left the show, the now-deceased Patrick was in fact number 3!

Obviously I’m not trying to diminish her right to feel sad after the demise of her first marriage and distraught at the death of her lover, but still…. *pout*

However while I’d stopped watching the show a couple of years ago I have to admit that there is NO WAY IN HELL I’ll be tuning into the show now. Because of this:

At least in the ads she or someone reminds her that she’s lucky to have ‘some’ family etc.

Again, I don’t begrudge Nina (or anyone) their children or happy families; and while I have (mostly) reconciled myself to remaining childless, I really don’t need it rubbed in my face. So while I *ahem* do realise the producers, directors, writers and cast *possibly* aren’t conspiring from afar to remind me of what I don’t have… I’m forced to admit I’m not really sufficiently gracious or evolved enough to watch the show (or ads) without feeling slightly bitter and twisted.

Are you an Offspring fan?
Do you suffer from life envy?