Almost two years ago I watched the TV series Deadwood. In typical (me) fashion I watched all three seasons in quick succession before buying the DVDs myself to keep and rewatch. Now I’m hardly a prude and must confess to swearing like a trooper, but even I was somewhat shocked at the language on the show. However… in my insignificant little mind, the show’s screenwriting and dialogue is rivalled only by two of my other fave TV shows: West Wing and Buffy the Vampire Slayer (mostly the early series’!).

Anyhoo, in my earlier post I noted that over the course of the Deadwood I liked the show’s central character, Seth Bullock – town sheriff and all-round nice guy – less and less. While the ‘baddie’ hotel and brothel owner Al Swearengen actually become more humane and likeable over the three seasons. It was hard for me to change allegiances, I said back then, having decided early on who the goodies and baddies were. I struggled as Bullock’s behaviour deteriorated, as if personally affronted.

I was reminded of this last night as I binge-watched Season 2 of The Walking Dead. 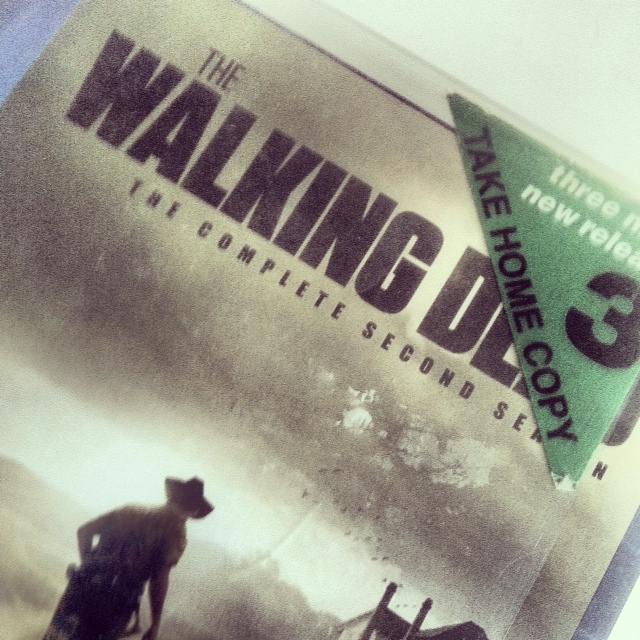 I’m not normally a fan of the ‘gory’ or gruesome, so zombies aren’t usually that appealing. However a friend recommended the show to me.

I only recently saw the first series and – although it took me a while to warm to it – liked it enough to be excited to see series two on the Blockbuster shelf last weekend.

As I had a couple of days off this week, I actually watched the entire 580 minutes in a 12hr period. I know this should have caused nightmares, but bizarrely I dreamt about my lack of gym attendance rather than the walking dead mauling mankind.

UK actor Andrew Lincoln plays the lead role in the series. Generally he’s a good guy trying to do what’s best for a group of survivors looking to him to lead them out of danger.

What I like about the show is that new characters have been introduced into the series in a fairly seamless fashion, with main characters being killed off. Keeping us guessing, if you like. But… having just finished watching the second season I’m left feeling confused about our lead character. Sure his best buddy (who boinked his wife when they thought he was dead) tried to kill him, but he’s suddenly grumpy and out of sorts and just a tad irrational.

Is it just me or did anyone else find his behaviour in the finale a bit strange? I’m not sure if I’m supposed to be still admiring him or not! Dammit. His change in behaviour sort of came from nowhere. Perhaps all will be well when Season 3 airs, or perhaps he’s ‘turned’ in some way.

And… in other news I’m excited that here in Oz tonight a TV show is debuting which will most-certainly remind me of my teenage-hood.

Puberty Blues was a 1979 novel translated into celluloid in 1981. For those not in the know, the movie centred around two (apparently ) 13 year old girls (although I don’t know that I realised that cos that would have really shocked me!) who DESPERATELY wanted to be accepted by the ‘cool kids’ at school.

I would have been 14 years old when I saw it and completely ignorant of the beach / surfie chick culture. Oh, and did I mention I was pretty innocent at that age?! I suspect I didn’t understand half of what was happening. I do remember one of my school friends (with the most liberal of parents) actually being forbidden from seeing the film with us at the local cinema when it was released. But as for me, I swear I never looked at panel vans or vaseline the same again.

From all accounts the TV series about to air, based on the book (and movie) is excellent: well acted and scripted. And I cannot wait. I’ve watched the original movie a couple of times in the (ahem) 30 years (faarck!) since it came out and struggle a bit with the acting and some of the dialogue. For many of us it will be a trip down memory lane – before technology appeared and our innocence was lost. I cannot wait.