My reading has dropped off over the last couple of months and my television viewing has picked up – something I mentioned in my ‘April: What I’m watching’ post. In fact, the last couple of weeks have actually seen me barely pick up a book.  Instead I’ve been watching sh*tloads of Netflix. So much so that I’ve decided I should – in fact – do a mid May ‘what I’m watching’ update lest the end of month version become toooo long. So here we go. (IMDb links in titles)

Bonding
While I’ve no personal experience of S & M and eye-rolled my way through the Fifty Shades books, I had no problem with the content of this show. It’s essentially about a woman who’s paying her way through college by working as a dominatrix… and the friend she ropes in (not literally) to helping out. I’ve read reviews from doms and subs who both love and hate this show. Some say it’s realistic, others say it perpetuates stereotypes. I’ve no friggin’ idea but it was kinda fun. Funny and a bit cringe-y in parts. Plot-wise it is a tad weak… our dom who’s resisted relationships and commitment is suddenly smitten by someone; and then the series ends on a weird cliffhanger. Stranger still, is that the episodes are short. Very short and I think online forums have discussed whether this was intended to be a movie as each of the seven (7) episodes is about 15mins long and the entire series is 1hr 47mins.

A Fortunate Man
Let’s just say this critically-acclaimed Danish movie represents almost 15hrs of my life that I won’t get back. Okay… it was only 3hrs but felt like 15. It’s based on a fictional account of a genius-like man battling with his personal demons – having rebelled against his religious family and minister father to pursue engineering and dreams up infrastructure seemingly ahead of his time. It’s based on a best-selling novel but it’s very slow. However the thing I struggled the most with was that it had bloody-well been dubbed from Danish into English. And the dialogue didn’t match the english subtitles. And the voice-overs were terrible. Why, why I ask you?! Leave it in the original language – we’re big enough and ugly enough to deal with subtitles FFS. (2hr 42mins)

Someone Great
I don’t watch many movies nowadays and certainly not romantic comedies but I’d seen the ads for this and it looked kinda fun. Which it was. It’s promoted as a ‘break-up’ movie as it’s about a woman (Jenny) who’s just broken up with (Nate) her partner of nine years. Well, he breaks up with her as she’s about to leave town and he doesn’t want to do the long-distance relationship thing. The cast was fun and the whimsical romantic bits during which Jenny remembers her life with Nate weren’t too vomit-inducing and – as a whole – this movie is kinda funny AND (more importantly) doesn’t take itself too seriously. (1hr 32mins)

Lucifer
Season four was released which required me to speed-watch season three and remind myself how it ended. I’ve written about this show before and it’s tremendously good fun. (I seem to be saying that about everything here!) This season continues to be kinda metaphorical / perpetuates the self-fulfilling prophecy that, how we see ourselves is how we believe others see us, which leads us to often act in a certain way so we become that version of ourselves. Or something. This season Eve (the original sinner) comes to play but thankfully we don’t entirely go down the expected path and there are a few interesting twists along the way. Angel baby anyone? (10 x 42mins)

Dead To Me
People are loving this show and I enjoyed it. It was good to see Christina Applegate again and she does a great job as the widowed Jen who meets Judy at a bereavement support group.

This show seems to offer a good balance between humour and drama as Jen goes through the spectrum of grief and we learn more about her relationship with her husband and how she, her kids and mother in law deal with his death. Her relationship with Judy becomes her touchstone but of course, things take a turn and there are a few interesting twists. I’m fairly certain there will be a season two. (10 x 30mins)

Wine Country
Apparently this is Amy Poehler’s directorial debut. I quite like Poehler and her oft-partner in crime Tina Fey, but this fell short for me. I described it to a friend as a vanity project. It was almost as if she wanted to hang out with her friends and needed a vehicle to do so. It’s ostensibly about old friends gathering for a 50th birthday. Each of the women though is going through something and this movie actually had the potential to explore that further. But doesn’t. The character development is lacking. We get to know quite a bit about one or two of the characters, though not enough and certainly not enough about others. Were they married, did they have kids, why did they lose their job, why aren’t they in contact more… I came away with more questions than answers.

I know it’s meant to be fun and there were some great moments, but they’re tied together quite loosely and there are a lot of cliches and quite a few cringe-worthy moments. And seriously… did there need to be so much singing and dancing, I mean… WTAF? (1hr 43 mins)

The Creative Brain
I watched this documentary to kill time one evening as it’s just under one hour long and well, I thought I could do with some creative inspiration. It doesn’t offer any spectacular insights that I wasn’t aware of but includes interesting interviews with GOT co-creator DB Weiss, novelist Michael Chabon, musician Nick Cave and former singer-turned-chef Kelis.

The Creative Brain Trailer from New Balloon on Vimeo. (52mins)

Agatha and the Truth of Murder
I’m a huge Agatha Christie fan and think she was waaaay ahead of her time. This movie is a fictional account of her whereabouts during her much-publicised 1926 disappearance. (I think it’s commonly accepted she had a meltdown of sorts and checked herself into a spa, though later claimed she’d had a memory loss. when doing so. Whatevs. Her business and no one else’s, other than the police looking for her I guess…) Anyhoo, this imagines that Agatha was solving a real life crime during that missing time – taking her mind off her writing and marital woes. (1hr 32 mins)

The 100
I’ve written about this show before and it’s weird as I often struggle with the early part of each season before getting engrossed. Here in Australia we’re an entire season behind the US (which is showing season six) but I had to speed-watch some of season four before launching into season five and am only part-way through. I’ve talked before about some of the ‘life lessons’ from the show but also really like the fact we’re offered some strong female leads. (13 x 42mins) 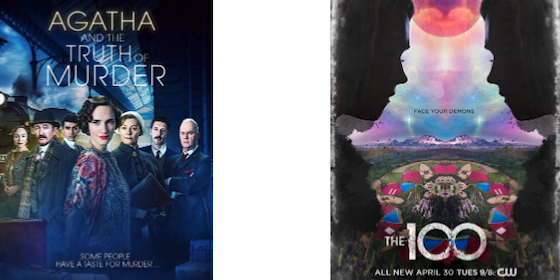 I should also admit to re-watching Derry Girls one night when I was feeling a bit low and have decided it will become my comfort watch (replacing my reliance on ‘Ab Fab’ circa 1990s)!

I’m about to start watching Harrow (on ABC iView) as I’ll need to watch season one before I start season two (currently showing on actual TV) but I like the idea of a show set in Brisbane and my mother tells me it’s nice to see familiar landmarks.

I still can’t bring myself to watch After Life (on Netflix) but really must get past my antipathy towards Ricky Gervais.

I’m linking up with the Lovin’ Life Gang today and happy to hear any more suggestions you may have.