We all have our guilty pleasures. Fortunately I refrain from reality TV shows involving the bloody Kardashians or housewives and stuff, but there are a few TV shows I find myself awaiting each week with unexpected glee.

One of those is the (new) TV show Scorpion. 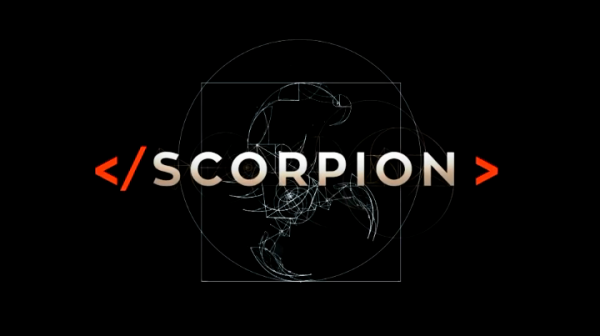 And… before you say anything I KNOW the show is ridiculously unrealistic. Let’s get that out of the way from the get-go: the first episode involving the aeroplane flying low and dropping a cable into a speeding car beneath it…. I rolled my eyes so far they almost popped out of my head. “I can’t watch this crap!” I thought.

And yet, the next week I tuned in. And the next. And now… I’m slightly addicted. It’s like this warm sensation comes over me each Sunday evening when I watch the show (usually after it’s aired as I tape stuff and watch it later). And before you start to worry about me crushing on actors 20 years my junior (ish), it’s not THAT kind of warm sensation. More a feeling of comfort and excitement. Akin to shows like The A Team  back in the day. Complete escapism.

Bizarrely the show’s actually based on a true story. Walter O’Brien is a real person – reportedly a genius and computer expert.

In Scorpion, faux Walter (Elyes Gabel) is working with some fellow geniuses (genii) in a failing start-up type company when he’s approached by a Homeland Security agent (Robert Patrick) Walter met when younger. Walter and his team save the day (#natch) and get contracted to the government. They take with them a waitress (Paige) who appeared in the first episode – who happens to have a son who’s a Walter-wannabe. Plus I assume there will be a festering love story down the track.

Paige (Katharine McPhee) is there to translate for team Scorpion (like me in my role with a bunch of twenty-something tech guys in my part-time job!). The four-person team each bring with them different skills. Walter is some sort of generic genius specialising in computers. Sylvester is a math / stats guru. Happy is expert in mechanical engineering and Eddie is a behaviouralist who can read people. Of course they’re all completely socially inept with a range of other issues.

In each episode the team’s dragged into some new problem / exploit and there are always a few mishaps along the way. Bizarrely I’m kind of ‘taken’ with the storyline around Paige and her genius son Ralph. She’d assumed he was ‘slow’ or perhaps autistic until Walter and his team recognised one of their own. He’s only in it intermittently but I enjoy his fleeting appearances.

It’s one of those shows which requires you to adjust your thinking. You have to suspend (dis)belief and go with the flow. Although the first episode was (to date) the worst in that respect; or perhaps it’s like Stockholm Syndrome and I’m already sucked in.

Unfortunately I suspect the show might not last long, but you never know. Until then I’ll keep tuning in with anticipation…

Any shows you don’t admit to watching?
What about something you didn’t think you could watch but find yourself sucked in?

And while I know this post is hardly hilarious, I’m joining the Laugh Link crew today.