Starved of anything better to do on a recent Monday night, I found myself watching the romantic comedy, Must Love Dogs. A movie I vaguely recalled seeing previously and, while I wasn’t glued to the screen, it kept me entertained in between channel surfing for something better. 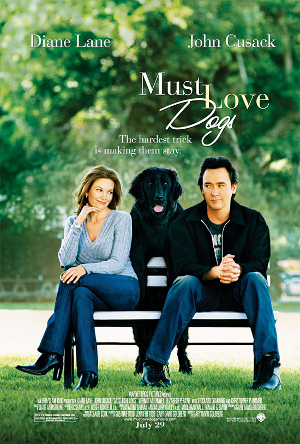 I mostly enjoyed the movie as I am a huge Diane Lane fan, but found myself cringing at the end of the movie. Having decided that she really did ‘want’ John Cusack’s character (Jake), Diane Lane’s character (Sarah) goes to find him and discovers him to be out on his boat. Not content to merely wait on the dock for his return, she is apparently so desperate to see him that she hails a passing rowing crew to take her into the middle of the river to find him.

Then, rather than paddling up to him, she leaps from the boat (along with the aforementioned and obligatory dog) and swims over to him. I could barely watch the scene as it was SO cheesy and (frankly) embarrassing to all concerned.

As I lay in bed later I found myself wondering why Directors or Writers feel compelled to include such scenes in an otherwise watchable movie, often destroying any credibility the film had engendered. As I pondered on this some other examples came to mind.

In How to Lose a Guy in 10 Days (a very ordinary movie made bearable only by the eye candy – care of Matthew McConaughey), the guy (on his motorbike) goes chasing after the girl (in a taxi) amidst traffic on some bridge somewhere. Accompanied, I am sure, by appropriately poignant music. Again, a scene which (to me, anyway) was so over-the-top I could only bear to watch through squinted eyes. 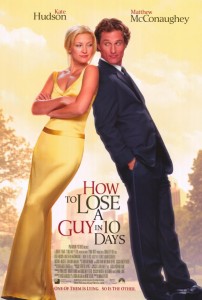 In Pretty Woman, Richard Gere braved the dodgy part of town – and the height of the fire escape – to declare his undying love for his hooker. In Sweet Home Alabama, Reece Witherspoon tracks down (the again very gorgeous) Josh Lucas amidst a storm and lightning conductors. Hugh Grant bumbles through a race-across-town and braves public humiliation to declare his love to Julia Roberts in Notting Hill. And who can forget Bridget Jones, clad in only a coat and her underwear, chasing after her man in the snow; Meg Ryan rushing to the top of the Empire State Building in Sleepless in Seattle; or her cohort Billy Crystal racing through busy streets to seek her out in When Harry Met Sally.

I sense a theme. So, I ask, what is it about the grand gesture and romantic comedies? Is the grand gesture a pre-requisite for any ‘romcom’ or chick-flick? Does it guarantee a box office hit? These questions and more were enough to occupy my busy little mind for a spell and I found myself mulling over the genre and what it has to offer.

The basic plot of a romantic comedy, or indeed, even a straight romance generally involves our two protagonists (usually a man and a woman in mainstream cinema) meeting, then separating (due to a fight or problem of some kind) before ultimately reuniting. That is it in a nutshell. Romantic comedy 101. Of course there are a few laughs or weepy moments along the way. And, as evidenced by my top-of-the-head list, the reunion is often preceded by some spectacular show of affection. A grand gesture of sorts. It seems to be rare that happily-ever-after comes without the grand gesture, but it is my opinion that the conclusion is often more palatable when the film remains gesture-less. The recent Sex and the City movie didn’t involve anyone racing through the streets, but rather the (other oft-used) accidental meeting of the former lovers. Interestingly they were still able to declare their undying love and we were able to believe it – even without the fireworks and near-misses. An old favourite of mine, About Last Night, comes to mind as well, the protagonists meeting at the end and deciding to start anew. To me, simple and believable. Completely believable.

Perhaps I lead a sheltered life but – to the best of my knowledge – none of my friends or their acquaintances has had to embark on a car chase or throw themselves out of a boat to declare their love for another.

I realise we are living in an age where we demand more escapist themes from our films and literature. But while I am happy to watch and read about wizards and vampires, I want the stories that are supposed to be believable, to actually BE believable and not sufficiently cringe-worthy to make me regret the previous two hours. Is that too much to ask?