The Gilmore Girls seems to be on everyone’s lips of late. A few people I know were already revisiting the show (which first screened between in 2000 and 2007) when it reappeared on Australian TV screens a couple of months ago—encouraging me to take a casual look now and again. (Which soon became every day!)

Thankfully our local TV station isn’t breaking the show between series, so in just a few months we’re already up to season four. And even though I watched it a decade ago and know what happens, I’m loving the time I spend each day with Lorelai and Rory. 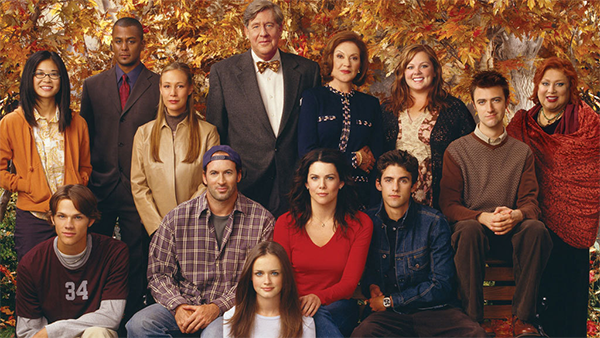 For those who’ve lived under a rock, The Gilmore Girls is a show about a 32 year old woman, Lorelai Gilmore, who (as a 16yr old from a wealthy family) found herself pregnant. She left home, had her child—who she named after herself ( and known as Rory) and has worked her way from maid to manager of an inn while getting her college degree at night school. Her ultimate aim is to open her own inn, which she eventually does.

Fortunately for Lorelai, she’s independent and chock-full of attitude… not to mention friggin’ gorgeous; and Rory, who we first meet at 15-16yrs, is smart and sassy like her mum. The Gilmore Girls are kinda renowned for their fast-talking, witty (and sometimes nonsensical) banter. Indeed, when they first appeared on our TV screens theirs was the relationship mothers and daughters envied.

Because anything and everything is being re-made or made into a movie there’s been talk about a Gilmore Girls movie. So far it’s just talk but recently most of the cast came together for the 2015 ATX Television Festival in Austin, Texas.

I’m kinda happy talk of a reunion show or movie was pushed aside cos those things never fail to disappoint. Instead I’ve been pondering what I would have done with our GG gang in my own reunion show — The Gilmore Girls: 10 years on. 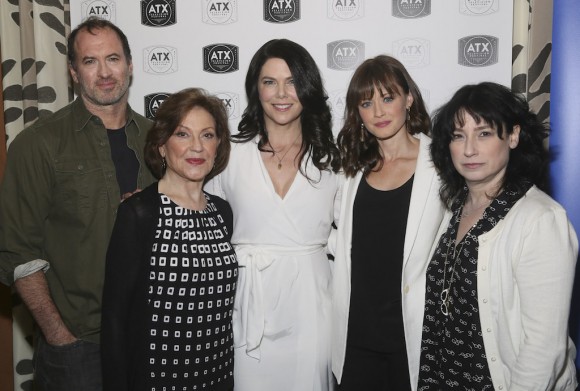 Lorelai and Luke are still married (or not, whatevs) and have a 9 year old boy (Luke Jnr) who’s v.much like his father and into sports, fishing and rough stuff and constantly pulls Lorelai WAY outside of her comfort zone.

The Dragonfly Inn is doing well and being managed by Michel while Lorelai’s in a hands-off role. But now that Luke Jnr’s in school she’s feeling old and redundant and has taken hanging around the diner, annoying Luke and trying to change stuff. In an attempt to sidetrack her Luke suggest she runs against Taylor for the position of Town Mayor.

He’s still running the diner and as grumbly as ever. The annoying daughter who appeared in season six has again disappeared and Luke takes great delight in offering Luke Jnr incredibly inappropriate life-advice.

Rory had back-to-back boyfriends for much of the series, so I’d like to think that 10 years later she’s had a few romances but is still single.

She’s a TV journalist and is on the cusp of great success when something terrible and embarrassing happens. (Nude photos, story stuff-up. I haven’t decided.) But it means she comes running back to Stars Hollow to hide; despite having not visited for some time. Obviously the story arc will involve Rory rediscovering her confidence and being reminded about what’s important in life. Yadda yadda yadda. 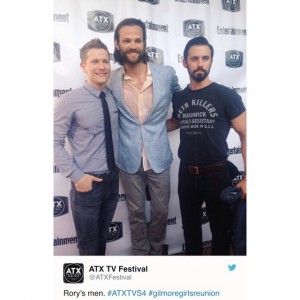 Dean’s got a chain of hardware stores or plumbing businesses or similar. He’s wealthy and divorced with two kids.

Jess is an impoverished but respected indie author who’s finally keen to settle down.

Logan married some well-bred type while on the rebound from Rory but has since separated.

All three are trying to win Rory back. #natch

Sookie, hubby Jackson and kids still live in town but Sukie now has her own cable cooking show. It’s a bit like Tim Taylor’s Tool Time. The show is a comedy of errors but works cos Sookie’s got talent and her clumsiness is kinda cute.

Of there were a myriad of other peeps but… well, meh, I cared little for them. (Though as an aside—and I know this is often hotly debated on forums—I would have been happy for Lorelai to end up with Max or Christopher or Alex or Luke. They were all pretty great characters and all fit well with the two Lorelais.)

I apologise if you’re not a fan of the show or if you’ve never seen it as this will all mean nothing to you. 🙂

Were you a Gilmore Girls fan?
What do you think they’d be doing now?*

* And yes, I know… once we’ve discussed this important issue we’ll get back to resolving the crisis in the Middle East.