Possibly the name of this blog post means nothing to you. I was going to call it, POI, but figured that’d be worse. I mean, do you have ANY idea of what I would be referring to ?! No??? Well, that’s okay cos it’s not your fault you have no taste.

Eek!…. so now that I’ve insulted you, I have a confession. And it involves YET ANOTHER) strange obsession. I know, I know… there are so many (and the list keeps growing). And sadly, this is yet another television show. But it’s a goodie. I promise.

I mentioned in a recent post, 2012 offerings – delivering on promises,  that I’d be writing about some other new shows soon – namely those which are fabulous but flying UNDER the ratings and hype radar here in Oz. And THIS – my friends – is one. In fact, if it was in danger of being axed – something which I usually only find out after I’ve become addicted – I would letter-write. Or if perhaps I would not write letters (or emails, cos, who on earth writes ‘letters’ these days?!) to the head honchos at CBS, but I’d definitely care and mope about for a while.

Person of Interest appeared on our screens in September 2011 alongside more-promoted compadres (hello, tortoise and hare anyone?!), some of which have already dropped off the edge of this oh-so-flat universe. Typically though here in Oz, POI – which rates well in the US – has already been relegated week after week into later and later timeslots to make way for CSI repeats and the like. (I recall THE SAME NETWORK doing the exact same thing to The West Wing circa 2004-2006).

But… thank f*ck for small mercies! At least it’s still on, although it’s often scheduled in at the last-minute, which surely doesn’t help it maintain any kind of audience! (I came across a new episode by accident while waiting for Alcatraz this past week! It hadn’t been in the TV guide and didn’t even appear on my TiVo’s program guide which thought that it was showing the fifty millionth re-run of a Big Bang Theory episode!)

Anyhoo, I cannot tell you how much I love this series and look forward to it each week (when I know the bloody thing is on, that is).

This show, for the uneducated, is one of those rare shows that gives us SOMETHING NEW. It doesn’t feature a law firm; or a hospital; and it isn’t about cops (well, mostly).

Instead the show centres around Harold Finch (played by Lost’s Michael Emerson), a reclusive gazillionaire who – post 9/11 – invented some sort of computer system which predicts future terrorist attacks. He later discovers, however, that ‘the machine’ also predicts violent crimes – which is of little interest to the government.

His conscience gets the better of him, and after handing it over to the government, Finch uses a back door he’s built into ‘the machine’ to obtain social security numbers of the future victims or perpetrators of the violent crime and sets about trying to prevent them.

For this, he hires John Reese (Jim Caviezel) a former soldier and CIA agent (an assassin of sorts, I gather) who’s bumming about as a homeless person after suffering from his own ‘crisis’ of conscience. 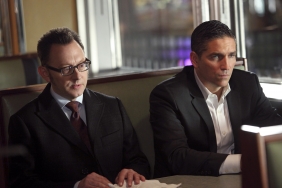 Finch offers Reese the opportunity for redemption and together they combine their brains and brawn to prevent the loss of life.

Emerson is brilliantly cast as the nerdy recluse, and Caviezel is so dispassionate as the emotionless and disenfranchised Reese it’s impossible to tell whether his monotone wooden character is the result poor acting or just really convincing.

Those worried about ‘big brother’ and all-seeing, all-knowing computer networks may get a bit freaked out by this show in which all kinds of technology actually fuel ‘the machine’.

But, what can I say? Person of Interest is different and it’s smart. A good combination in my books.