You may have noticed that, because I’ve got such hardy self-esteem, I have no problems confessing to the occasional foible or idiosyncrasy. (Then again, there’s also my leaning towards self-deprecation…!)

Either way, as a result, I have no problems admitting to addictions. I’ve confessed to binge reading, binge tweeting, and the fact I am a television addict. Indeed the latter goes WAAAAY back.  It’s not just the likes of Buffy and The West Wing which have tickled my fancy. No sirreee… I was addicted way back in the day of the Bill and Ben the Flowerpot Men, Chips, Starsky and Hutch and Charlie’s Angels – to name just a few of my childhood faves.

But, by far the shows which I loved the most were The Six Million Dollar Man and The Bionic Woman.

Already a fan of Steve Austin, I was thrilled when (in 1975) Jaime Sommers appeared in The Six Million Dollar Man double episode as his love interest and – after a parachuting accident – received bionic legs, a bionic arm and ear.

However… former fans of the show may recall that Jaime’s body rejected her bionic bits and she died. 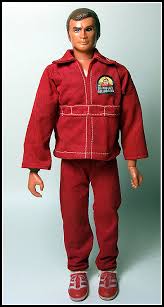 I was still in tears days later, my parents powerless to comfort me, when after dinner one night they told me to go and check under their bed for something. And there, in a box (I assume, cos I can’t remember that bit!) was my very own SIX MILLION DOLLAR MAN doll!

I suspect I still mourned for the loss of Jaime, but my Steve Austin doll pretty much made up for any real sense of devastation (see… I was fickle and all about instant gratification even then!).

I’ve still got Steve… and you can still open the bionic peepholes in his legs, but you can’t roll the skin up off his arm to check his bionic bits cos it sort of melted on there sometime in the last 35ish years. You can also mostly see through his bionic eye, but it’s a bit foggy.

Of course what I didn’t know was that – behind the scenes, Jaime’s character had become so popular they brought her back to life and gave star Lindsay Wagner her own TV show, The Bionic Woman (which ran from 1976 – 1978).

I later got a Bionic Woman doll as well – which I still have and also in a state of dishevelment and now living happily ever after with Steve in a carton somewhere.

I’m not sure what it was about the whole thing which upset me so much. I suspect it was the perfect love story and the fact that Jaime stood for the empowerment of women before I even knew what that was or what it meant. Like most superheros, Jaime was smart and strong and I wanted to be just like her when I grew up. (Though all I really mastered as a kid was her hair flick!)

PS. As an adult I appreciate my parents’ gesture even more because we weren’t particularly well off and they weren’t prone to buying us whatever we wanted. (We were spoilt with their love but not endowed with every toy or game we wanted.)

What was your first TV obsession?
Did you ever watch the recent remake of The Bionic Woman? If not, don’t worry cos it was crap!

Linking up again today with Kerri Sackville and her #MyFirsts, today’s topic being… My First Obsession.