The Dry, the movie based on the book by Jane Harper is officially being released in Australia on 1 January 2021. But my local cinema (and others I assume) is offering advance screenings so I decided to get in early.

I didn’t ‘love’ The Dry as much as most people. I read a similar book that year which I preferred. Thankfully I’ve a mind like a sieve and read far too much so I was very murky on the details of the book. Which was good as I’d forgotten whodunnit.

The book (and movie) centres around a federal police officer Aaron Falk, who returns to his childhood hometown, Kiewarra, for the funeral of his former best friend. Luke seemingly killed his wife and son before shooting himself. Luke’s parents don’t believe he was capable so plead with Falk to (re)investigate the deaths. Playing in the background is the death of a young girl Ellie, twenty years earlier. And the reason Falk and his father were forced to leave town. 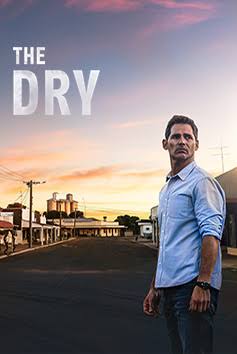 The cinematography is glorious. It really captures rural Australia and its vast open spaces. And it nailed the small town presence. From the shops and main street, to the local pub and fine dining on offer.

And it’s quintessentially Australian. The portrayal of many of the characters could easily have been cliched and maybe in some ways it is because they are so bloody Australian.

Eric Bana is great in the lead, though probably not who I would have pictured in the role from the book’s description. My only thing with Bana is that many of his characters feel the same. I suspect it means (for me) he doesn’t always inhabit the characters he plays.

Matt Nable who plays the embittered Grant, Ellie’s brother, was the standout for me. There was so much power in his performance. Actress, BeBe Bettencourt who plays young Ellie, is also impressive and extremely charismatic.

There are other actors many Aussies will recognise such as Miranda Tapsell, Julia Blake, Bruce Spence, John Polson and Renee Lim. I took a while to place Genevieve O’Reilly until I remembered I hated her passionately a decade or so ago for being Richard Armitage’s love interest in Spooks, the UK TV show. (I’m fairly sure she got killed off though, so you know… karma.)

I really enjoyed this movie and definitely recommend it, but it occasionally felt a little slow. I don’t remember the book having so many flashback scenes soooo liberally peppered throughout. I suspect some are done for visual impact – the then and now – but I know my mother (who had come along) was initially a bit confused about the quick changes. They do, however, do an excellent job at showing the disparity between the vibrancy of the bush and flowing creek ‘then’ and the muted dry practically-invisible creek-beds of the present.

This is directed by Robert Connolly and I’m glad this was handled by those who know Australia well and who embrace our culture with passion and without irony.

I should mention author Jane Harper pops up early in the movie which made me smile.