I am a self-confessed fickle and adulterous TV viewer.  I have admitted on a number of occasions that I become obsessed with a television series, only to throw it over when a better contender comes along.

Not content to have tossed aside the likes of Northern Exposure, Buffy, West Wing, Sex and the City, Firefly and Dexter, I have blogged about my recent obsession for Pushing Daisies, Dead Like Me, Entourage, Fringe (twice), Robin Hood and Deadwood, each time excited that I have found something which takes my fancy and – the show in question – is afforded top spot on my TiVo.  That is, until the next best thing comes along.

And I am doing it again.

For me, Channel 10 here in Oz topped off a relatively ordinary television year in 2010 by debuting the new American series, Raising Hope.  I’m not one for slapstick humour (in fact you can see from my list of favourites, I’m not one for comedies much at all*), but the TV ads I’d seen before the show aired looked hilarious in an ‘Oh-my-God-I-can’t-believe-they-did-that!’ kind of way.  I laughed-out-loud every time I watched the clip where the young father had proudly bought the baby seat for the car but then didn’t realize it had to be strapped in until they turned a corner and the seat (and baby) somersaulted (unharmed) around the car’s back seat.

While not macabre or lewd, the show isn’t for those who take themselves (or life) too seriously.  The humour can bit a bit juvenile and is often a bit black. 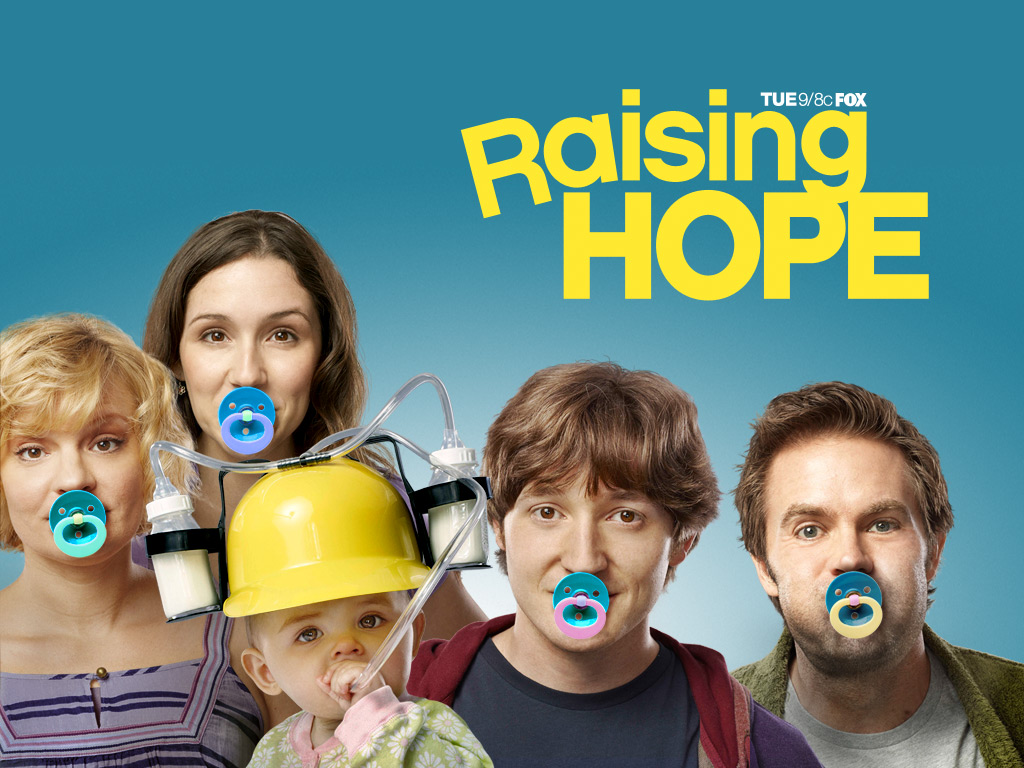 The premise of the show says it all: 23yr old Jimmy Chance has a one-night stand with a woman who turns out to be a serial killer.  Impregnated during their night of bliss, Ms Serial Killer gives birth while on death row and six-month old Princess Beyonce is handed over to Jimmy after her execution.

Jimmy still lives with his young parents (Virginia and Burt) and works for his father’s lawn mowing and pool cleaning business.

We quickly learn that Jimmy’s own upbringing was somewhat unorthodox, with Virginia giving birth to Jimmy at 15 years of age (Burt was 17).  Regular flashbacks give us sneak peaks into the loving – albeit quite dysfunctional – family.

After unwillingly inheriting Princess Beyonce, Jimmy (Lucas Neff) convinces his quirky parents that they shouldn’t leave her on the steps of the local Fire Station and the family starts to grapple with raising the renamed Hope.

The cast is all amazing, though for me Lucas Neff’s Jimmy is outplayed by his parents Martha Plimpton and Garret Dillahunt.  To top it off there’s Maw Maw, Virginia’s grandmother, whose Alzheimer-ridden behavior is delivered hilariously by the often half-naked Cloris Leachman. The comedic timing of all of the cast is perfect.  And frankly, the twins who play Hope are just gorgeous beyond belief.

I know the ‘baby-poop-smells’ gag has been done to death and is beyond passé, but I think the tone of the show was set in the pilot episode when Jimmy is so shocked by the smell that he actually vomits all over the baby.  Before he and his mother can clean the vomit off, she gets a whiff and does the same.  For some reason the scene didn’t cause me to eye-roll which would be the norm for such obvious humour.  I mean, I am pretty sure vomiting on babies is kinda frowned upon – but again this was laugh-out-loud funny. In a sick and not-politically-correct way, that is.

Shows about dysfunctional families and parents aren’t uncommon or new (thinking back to the likes of Rosanne, Married With Children, Malcolm in the Middle, The Simpsons etc) but, well frankly, I didn’t like any of them.  My taste in comedy usually borders on the darker and more sarcastic, but I find myself chuckling aloud at the antics of the Chance family.  In a recent episode (Family Secrets) I laughed so much (at Burt putting make-up on Hope) I snorted diet coke out of my nose.  And did I mention that baby Hope is just gorgeous?

Raising Hope has forced its way to the top of my TiVo recording priorities.  I can but ‘hope’ the quality of acting and screenwriting continues and look forward to seeing what comes next for the Chance family.

* Although old British favorites, Absolutely Fabulous, Black Books and As Time Goes By, hold special places in my heart, Big Bang Theory is a current fave.