I have a fabulous idea for a TV show.  If I do say so myself.  The idea struck me as I was contemplating what it is that has me so infatuated with the BBC Show Escape to the Country. 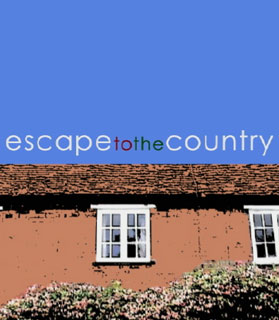 Here in Oz it is being shown on one of the new free-to-air digital stations (7TWO).  Obviously not popular enough to make it to its flagship Channel 7, the network is showing it on one of its offshoots (currently on Friday and Sunday at 8.30pm).

I came across the show a couple of months ago.  Pitiful though it may sound, I never do anything on a Friday night.  In fact, Friday is the one day of the week that I am likely to be least interested in staying up late or over-imbibing in champagnes or red wines.  I am always mentally exhausted and loll in front of the television for a couple of hours before having an early night.  So for me anyway, the fact that Friday night television is pretty crappy has never been an issue.  The lack of alternatives is, in fact, what allowed me to stumble across the BBC gem.

Not one for lifestyle / makeover type shows I suspect I had flicked past it on a number of occasions before watching enough to get me hooked.

What entices me though, is unclear.  From my extensive research (Google yet again!) I note that the show has (had) a number of presenters and (in the UK) is in its 9th season.  But here in Oz we are seeing episodes from a few years ago fronted by host Catherine Gee.

I suspect part of my fascination with the show is Catherine.  Or more honestly her voice.  As an Aussie, her well-rounded (but not quite plummy) vowels are surprisingly endearing.

And then of course there is the subject matter: homeowners in suburbia wanting to move to the country.  For some peace and quiet; or to grow a vegetable patch; or (as per last night’s episode) raise some alpacas.

The format of the show is straight forward*.  We meet the country living wannabes and get a look at their current property (what it is worth and how they currently live); then Catherine sits down with them to get their ‘wish list’; both in terms of property inclusions and location.  Most of those featured are still working so need to live close enough to transport to get back to civilization, but still want a balance of rural living with some access to nearby amenities.

Catherine then searches out four properties and looks them over while the wannabes watch via laptop.  They then choose their favourite two to visit.  They then (of course) have the option of pursuing one that they like by putting in an offer etc.  Disappointingly this rarely happens.

For an Aussie, the quintessential English village is enticing.  And romantic.  I was disappointed that last night’s retired couple was after a ‘modern’ home… which translated into some quite unattractive 1970s ‘brick and tile’ house – a common sight in Australian suburbia, but something I wouldn’t touch with a ten foot pole.

I was travelling home from the city this week and as the bus stalled in traffic I read the sign in front of an old Catholic Church.  It decreed that the church was the oldest in my State of Queensland.  It was 160 years old.

On Escape, most of the properties are actually built in the 1800s or even 1700s.  They ooze character, though their upkeep may also ooze digits from one’s bank account.  Here in Oz we have heritage style houses known as Queenslanders.  These timber houses are built for our climate with covered verandahs providing outdoor living space.  The countryside houses in the British show make these houses look positively futuristic.

So, I am glued to the television screen as Catherine explores the houses with their original fireplaces and stone walls in villages featuring quaint pubs and few shops.  Having always dreamed of living in some tiny English village with an oddly-named pub, I am probably as enthusiastically naive as many of the show’s couples wanting to make the lifestyle change. 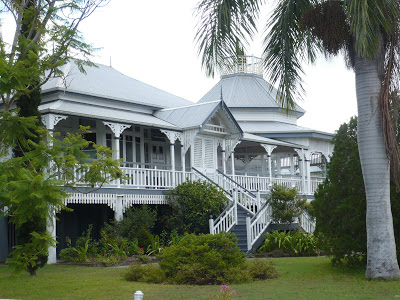 But, back to my idea…. For some time popular culture (here and around the world, I suspect) has raised the notion of families, couples and individuals ‘downsizing’.  Here in Oz we talk about a ‘seachange’ or a ‘treechange’ depending on whether it is beachside living or rural Australia that you are craving.  So my idea is for a similar show here, with a Catherine-equivalent scampering about small beachside towns or picturesque hinterlands to locate new lives for harried city-dwellers.  I reckon the show would also sell overseas.  While I live in a 3-level modern apartment gleaming with glass and stainless steel craving the ‘old’, I am sure there are Brits living in rustic England fantasizing about our beaches and clean lines.  So, voila – there it is.  My brainwave.  Perhaps I can sell it to a network and make enough money to go and Escape to the Country myself!

* The aforementioned extensive research also led me to discover that the format changes from series 6.

PS. The new format hit our screens here in Oz in 2011 and… (dare I admit it?!) I have to confess I actually like it better than the original. No offence Catherine-of-the-lovely-accent, but I also enjoy Jules, Alastair and Melissa. (And yes, I know I’m a turncoat!)