We all now know what earworms are. Mostly synonymous with annoying children’s TV shows and unfortunate songs that get stuck in our head. Usually the Wiggles or the one about the Baby Shark or similar.

Like many I recently fell in love with the latest season of Bridgerton; far preferring it to season one (as Daphne annoyed me and looked like a petulant 15 year old).

I loved the simmering steaminess of season two compared to the openly sexuality in season one. And of course the music – which received much attention in s1; the classic twist on contemporary hits – is an integral part of the show’s innovation and allure. Season two built on this and I loved Alanis Morissette’s You Outta Know, along with Dancing on my Own, Sign of the Times and Wrecking Ball, the latter which stuck in my head for weeks… months. (Perhaps as a result of the number of times I’d watched that episode).

I was never a fan of the original version of Miley Cyrus’s song so the fact Wrecking Ball lived ‘rent-free’ (as the youngsters say) in my head or unexpectedly appearing on my lips, was frustrating.

Until… like the old lady who swallowed the spider to catch the fly (before eventually swallowing a cat and dog and horse etc) I watched the latest season of Stranger Things.

And voila – like magic, the music of Bridgerton was gone. Only to be replaced by Kate Bush’s iconic Running Up That Hill. Which of course (as a person of 54 years of age) I well remember the first time around in the late 1970s (along with Babooshka and Wuthering Heights). 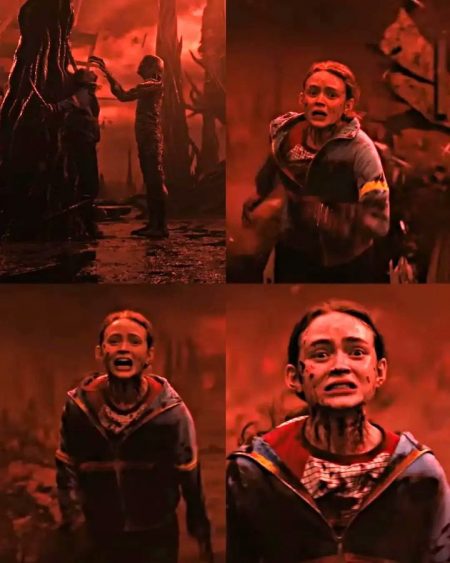 It has to be said that the Duffer Brothers (creators of Stranger Things) were inspired in selecting that song. I don’t recall music from previous series’ of the show being as memorable but of course everything about the melody and dramatic nature of Kate Bush’s masterpiece was perfect for this season and the song was ‘manipulated’ brilliantly.

However, though I loved it and enjoyed listening to it a few times. It’s now been a week or two and it is STUCK in my head. Looping, ad nauseum. I need something to dislodge it.

Just not a horse cos isn’t that what ultimately killed the old lady? Who’s dead… of course.

* Stranger Things image from stuff.co.nz (click on image for article)