The TV show Blue Bloods burst onto our screens a couple of years ago. Okay… so there may not have been bursting, but I liked the alliteration. Nevertheless, the show was widely promoted and appeared with much fanfare. However… it wasn’t long before Channel 10 moved it to a late timeslot before eventually relegating it to its less-mainstream stablemate, ONE.

This was fine with me as I was just happy that it remained on our screens.

I’ve briefly mentioned the show before. Tom Selleck is the perfect Commissioner of Police. Indeed those Hawaiian shirts and short shorts are most-definitely only a vague memory. (Albeit, a pleasant one at the time! And yes… WTF were we thinking back in the 1980s?!)

As an actor Selleck has the gravitas and charisma to carry off the important role of Police Commissioner AND Frank Reagan, loving dad and grandad to a traditional New York cop family. I must admit, I only ever see family gatherings like the weekly Reagan lunch on television (the show Parenthood also comes to mind) but it’s kinda nice to see. 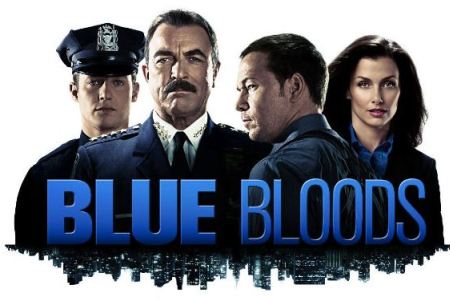 Selleck is well supported by Donnie Wahlberg as his cop-son – although I’m surprised that the fact his character seems to get the ‘choice’ cases doesn’t result in favouritism complaints from other detectives. And I’ve long been a fan of Bridget Moynahan (since her SATC days) as the sole daughter and non-cop in the family. Of course as a ADA, the apple hasn’t fallen far from the tree.

The family interaction, with youngest son Will Estes, also a cop and Lou Cariou – the patriarch of the family (well, kinda in a Queen Mother role. He’s obviously respected and loved, but nowadays it’s his adult child wielding the power in that family!). And I love daughter-in-law extraordinaire (Amy Carlson) – and not just for her haircut – although that is part of the reason.

I love that the show tackles important (and timely) issues and it strikes a good balance between the family / background stuff and the case at hand. It is, after all, essentially a cop drama. My only criticism is that – on a couple of occasions – the writers appear to have commenced dabbling in a storyline or plot offshoot which has been shelved (early episodes re the Blue Templar come to mind!).

However, I’ve been a devoted fan of BB since it aired on Channel 10, moved across to ONE and through a number of breaks and timeslot changes.

And now… it’s back into the fold. Back on Channel 10. Not one of its ugly stepsisters ,but on Channel 10 itself.

Amazing… Who knows, next thing Beauty and the Beast will appear on Channel 10 rather than its other ugly-stepsister, Eleven. Or, repeats of Heartbeat will be shown on primetime on Channel 7, rather than 7TWO. Or maybe not. NB. Watch either of those at your own risk! 😉

Have you seen Blue Bloods? Are you a fan?
Do you remember Magnum PI?
Anything else you’d like to see back on mainstream TV?