Let me start by prefacing this post with the statement that I do not, in real life, have a thing for ‘bad boys’.  As a natural cynic I have never aspired to find someone I can save, or change, or mould in any way.  This is because the man of my dreams will (of course) be a perfect specimen, not requiring any tweaking or shaping.  Hmmm… on further consideration this may well be why I am single!

On screen however, it seems that my taste is far more seditious.

I have just commenced a long holiday and after two laps of my local video store, I settled on the TV show Robin Hood (2006-2009).  I hadn’t ever watched it but recalled it being moderately popular and decided I was desperate enough to check it out for myself.  Given that there were only three Seasons made and all available, I also figured it would give me enough to do for a few days while not requiring me to wait (im)patiently for a new season to be released.

As I am not a fan of the ‘action’ genre, I expected that I might watch a few episodes before returning Season 1 mostly-unwatched.  However, to my surprise I literally inhaled two Seasons in less than three days and would have watched the final Season if some other pesky customer hadn’t kept it from me. 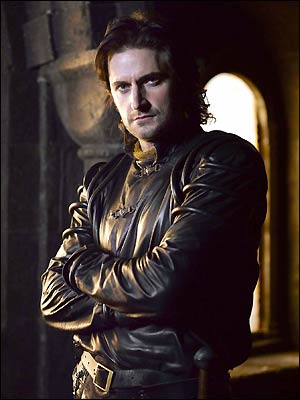 Although Jonas Armstrong is surprisingly bewitching as Robin Hood, hero of the masses, it is the enigmatic and (frankly) bloody sexy Richard Armitage, who played Sir Guy of Gisborne who captured my heart.  Delivering on the Sheriff of Nottingham’s carnage does nothing to stymie my bad-boy adoration and (well, let’s face it)… lust.  Dark, brooding, sexy and sardonic, he is night to Robin’s day. He is my Mr Darcy, leaving Mr Bingham in his scathing wake.

It has made me wonder how much of the on-screen bad boy thing is expert casting rather than girl’s natural instinct to ‘turn-around’ a man who surely wants to be saved even though they may not actually know it.   In Robin Hood, Armstrong as its namesake is young and lanky and portrayed as a bit of a larrikin, whereas (be-still-my-beating-heart) Armitage is buff, stubbled and clad in black leather.  And in the first two Seasons (at least) we are privy to glimpses of humanity, leading us to believe he is not completely beyond redemption (and therefore worthy of our lust).

Although it dates me, I recall similarly finding Luke Perry’s Dylan far more attractive than Jason Priestley’s Brandon on (the original) Beverly Hills 90210.  I preferred Chris Noth’s Big to John Corbett’s Aidan in Sex and the City.  And for a more timely pop culture reference I have to admit to a slight lustful interest in Glee’s Puck as opposed to, well…whatever the other guy’s name is… you know, the tall lanky blander-than-white-bread guy.

Ever since James Dean graced the screens in the 1950s and studio bosses recognized our lust for the bad boy, casting directors have given us a choice.  Squeaky clean and cute, or sexy and broody.

And in the parallel universe of film and television, I know which I am buying….