I’m a self-confessed TV addict and the only thing I love more than my regular fix of all of my favourite shows, is TV on DVD. No waiting for the next instalment. Instant gratification. What’s not to love?!

And even better than binge-watching an entire TV series in one weekend is that joy of unearthing a new favourite. I’m often a latecomer, discovering Buffy four years into its run, Deadwood years after it finished airing and The Walking Dead and Game of Thrones just recently.

Many of these shows generate a lot of hype and have a cult-like following with good reason. They are bloody good. And riveting.

I’d heard of American Horror Story. Of course. Even here in Australia AHS has generated a buzz, however, because it was on at some obscure time with minimal fanfare I didn’t even know it was on free-to-air TV until I came across an episode a few months ago. And quite frankly… It. Freaked. Me. Out.

Of course, knowing nothing about the backstory or series itself didn’t help. But… I knew it had been nominated for a Golden Globe Award in addition to an astounding 17 Emmy Award nominations, so I knew it had to be impressive.

AHS Season 1 was released around Australia on DVD and Blu Ray this week. (Just in time for Halloween for anyone thinking of a quiet night-in!) 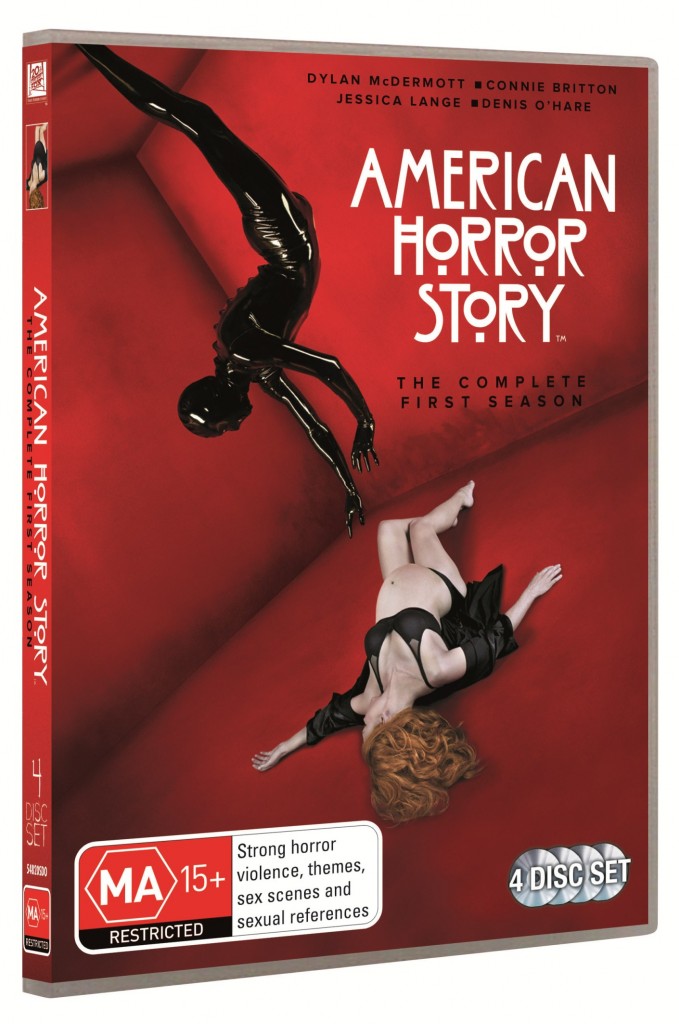 As I’m in the midst of moving house I took the opportunity to have a break from my to-do list and picked up a rental copy of the TV Series yesterday. I started watching late morning and by early evening I’d finished all seven episodes on the first half of the DVD. (God knows why but the store rents it as a overnighter in two halves!)

If I hadn’t been celebrating the sale of my former apartment with some champagne I might have jumped in my car then and set off to get the remaining five episodes, but sadly, I’ll have to wait until the store opens today to get my next fix.

AHS is not for the faint-hearted. I am a huge woos. I can’t watch horror movies. I get freaked out by anything scary and indeed, I’ve watched some of AHS through gaps in my fingers as my hands are cupped over my eyes. But, this stylistic drama is addictive.

The first season centres around the Harmon family, recovering from trauma and infidelity, who discover the much-reduced price on their dream house is because it just played host to a murder-suicide. Little do they know that the most recent tragedy was one of many to visit the house.

The Murder House (as it’s known) is a key character in the series. Built in the 1920s, it’s been reinvented many times over the ensuing 90 years, but its spirit remains.

The House itself is supported by an excellent cast. I’ve long been a Connie Britton fan (well, since Friday Night Lights, though it does disturb me a little that her hair doesn’t seem to move. At all). Britton and screen husband Dylan McDermott offer raw and moving performances as Vivien and Ben Harmon, a couple trying to rebuild their marriage and family life with their daughter Violet (played by Taissa Farmiga). 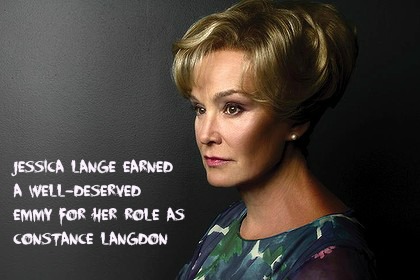 The cast is rounded out by Frances Conroy (memorable to me from Six Feet Under) as the House’s housekeeper and Jessica Lange (as Constance Langdon, the very eccentric neighbour and former owner of the Murder House). Obviously we meet some other regulars, former residents who continue to haunt the house, along with an array of clients of psychiatrist Ben, including Tate (Evan Peters) who befriends Violet.

Each episode begins with an incident from the House’s past. And in each episode we learn more and more about the House, its history and its inhabitants. Part of the show’s allure is that sense of slowly uncovering the House’s story. It’s like trying to piece together a puzzle without knowing if we have enough information, or even if we’re supposed to be able to solve the riddle as yet.

And that’s what will keep me coming back for more!

AHS Season 2 has just started airing in the US. I’ve done some research (aka Googling) so know that some of the major characters do not return for the second season. Like its contemporaries (Game of Thrones, The Walking Dead etc), it’s one of those shows where you just can’t ‘assume’ your fave peeps will survive the day!

The show’s creators, Ryan Murphy and Brad Falchuk, are also the brains behind TV show, Glee. Both shows have some dark and off-beat humour in common along with some eccentric characters, but little else.

I’m already nervous about what fate might await some of the characters I’ve grown to know and love. But… I. Have. To. Know. What. Happens!

The DVD itself includes a heap of extras and its release is accompanied by some AMAZING resources…. for example, this Murder House Interactive app allows you to explore the House and check out other ‘Murder Houses’ in your own area. I put the details in for my mother’s house and got a list of deaths in the street. Eek! Not sure how accurate it was, but it also references locations like Boggo Road Jail in Brisbane and the murder of a prison guard. Freaky!!!

If you’re a fan of the show, or think you may become a convert (like me!) then you now have your chance to win your very own copy of American Horror Story Season 1 on DVD. I have one copy to give away and for your chance to win, simply leave a comment below telling me why you would like to win a copy of the DVD.

I apologise (in advance) for this blatant attempt at self-promotion to grow my Facebook likers but IF you also ‘like’ my Debbish Facebook page and let me know you’ve done so in your comment, you’ll get a second bonus entry in the draw!

Unfortunately this competition is only open to Australian residents, though international readers are more than welcome to leave a comment.

The winner will be drawn randomly on midday Saturday 3 November (Queensland time!). NOTE: THIS COMPETITION IS NOW CLOSED!!!

Disclaimer:
I rented this DVD series myself, however Twentieth Century Fox Home Entertainment and Way to Blue have provided me with a free copy of the DVD series as a competition prize. There has been no compensation or other incentive offered to write a favorable review. All opinions expressed in this space are mine, written with the objective of giving readers my personal opinion on the TV series.