Carla at MizFitOnline last week wrote about the fact that she came across this image (below) and as a result, went about her new hometown asking people to take what they needed. 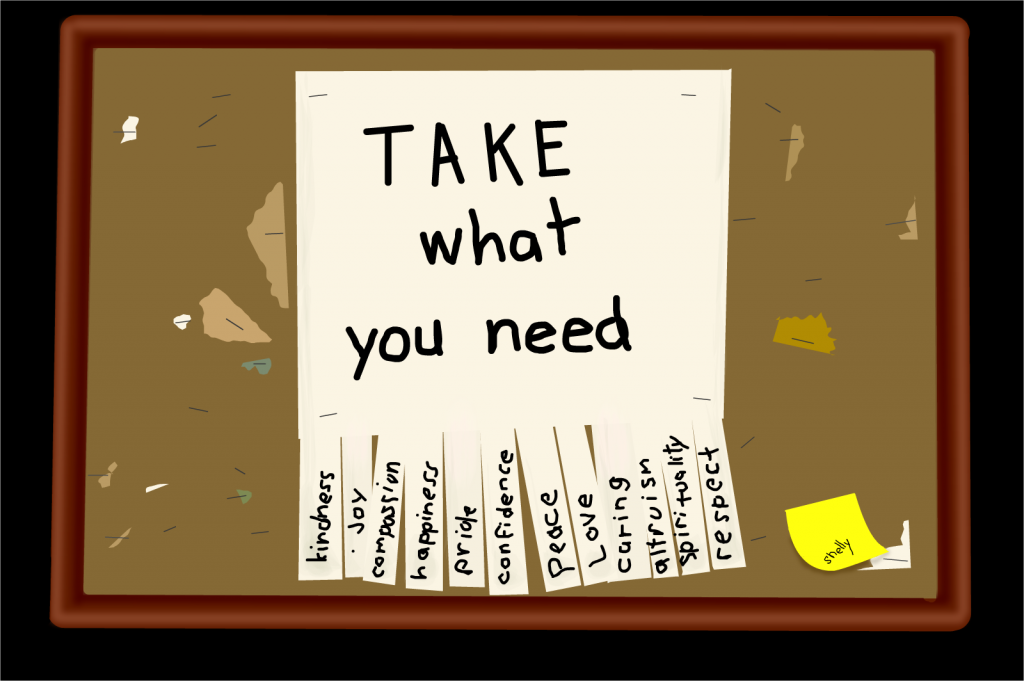 I loved the concept of these notes and Carla reported back that ‘Patience’ seemed to be popular.

In commenting on Carla’s blog post I realised: It’s sometimes hard to take, or get, what you need (it’s not always offered). Sometimes you have to ask for it.

Which, for me, is a problem.

I’m not great at asking for help. I’m a fantastic moaner and whiner, but find it hard to ask for  stuff. Generally it’s help around the house or something that comes as a result of living alone and being single (getting picked up after surgery or help carrying something). In the Debbish post I wonder if it’s because I see (asking for help) as a weakness; or whether I hate the notion of being indebted.

I had my first massage 12-13 years ago when I went to a Health Retreat. I was scared shitless and had no idea what to expect. Even now, I still remember the therapist reassuring me. But the very-lovely massage came with a warning.

“Some people get really overcome or overwhelmed,” she said. Huh?!

She explained that she’s given massages to widowed or divorced women who have become used to going without ‘touch’. The art of being massaged and having someone touch you, she said, can be mightily powerful.

It was the first time I really thought about ‘touch’. As a single woman (who’s always been single) I was never touched much in my old life. Every few months I’d see my closest friends, my mother or my niece and get a hug – but that was it. I’ve never been a ‘touchy’ person. In fact, some people would probably say that I’m the opposite (and I possibly am) – particularly in my younger and post-anorexic years.

I’m not sure therefore, I ever thought much about not being touched or hugged until I was. 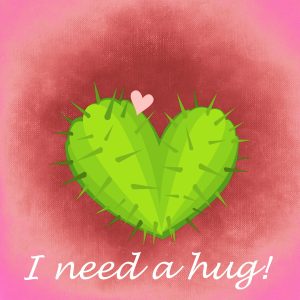 My current life, however is VERY different to the one I led before my move. I’m seeing my mother (at least) weekly. I’m seeing my aunt and uncle a lot and I’m spending time with new friends and socialising a lot more than I used to. And as I mentioned in my last post (which actually grew out of this one!) I’m getting regular hugs from my friend’s little boy. His unashamed joy from cuddles is addictive as his seemingly unconditional feelings of ‘like’ for me.

I realise I have something that was missing from my old life:

For me, with intimacy comes the ability to ask for whatever it is that you need.

Although I’m happier than I can almost-ever recall, I’ve been unwell of late and struggling a little with this new life. Twice in the last few weeks I’ve called my mother on the spur of the moment to say that I’m coming (to her place in a nearby town) for a sleep-over. Just to see her. Just to talk to someone who’ll listen without judgement (or with judgement but avoid sharing it with me!).

I know those with partners and kids envy my freedom but I also envy the intimacy they share. I’ve longed to have someone to talk to (with some intimacy and honesty) at the end of each day.

Very few of my old friends read my blogs, although one of my besties does from time to time. I suspect she and my other BFFs would tell me that they’re there for me and always have been. Again, however, it comes back to my inability to ‘ask’ for what I need. And given others’ busy lives and many commitments, it’s hard for them to chisel out time to notice how I’m tracking.

In her follow-up post Carla told how her daughter used the sign they’d made to tell her mother she needed ‘love’. My comment on the post was that perhaps – for those who have trouble TAKING what we need and who need to ASK for it – she should make a fridge magnet or a portable version allowing us to shyly hand the word or phrase to someone in times of need.

If you were taking a piece of Carla’s sign, what would you ‘take’?
Are you good at asking for what you need?
Do you ever have intimacy-envy?

PS. If you see me walking around with a chalkboard tied around my neck you’ll know why!