I rarely talk about my work or my workplace. And that’s for a few reasons; but predominantly because I work for a government agency so am conscious of what I say and do publicly (in ways which could relate to my job. Obviously I’m happy to swear a lot and confess to embarrassing foibles, cos well… unless I enter politics, no one would really care about that!). In addition there’s not that much to talk about… ‘blah blah blah, public servant, blah blah blah.’ Etc.

But today I thought I’d share a little titbit about my place of employment which has me kinda intrigued.

And from the title I bet you think I’m about to launch into some tale of post Office Christmas party exploits or other similarly sordid happenings. And, well… sorry about that…. this is not THAT kind of post.

I should start by saying that my workplace (as in the building itself) is AMAZING. We have great facilities and huge lunchrooms and kitchens (rare in government when you’re usually required to eat at your desk or outside). We’re located in a 6-star energy rated building which is quite new and constantly being monitored for improvements by the building’s owners.

And about two months ago a little shelf appeared just outside of the female toilets on my floor. 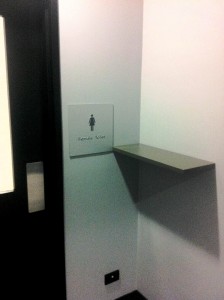 Not so amazing you might think. But in fact it’s friggin’ wonderful! I am assuming (and am sure I must be right, cos I am never ever wrong), that it’s there for we gals to put our crap on, rather than lug it into the loo with us. Some people do care about hygiene. Apparently. The fact that similar shelves aren’t outside the gents’ toilets is a tad perplexing, but I won’t worry myself about that for now. Perhaps it was planned for handbags or other girlie essentials, though frankly I mostly use it for my water bottle and the like.

Because I am a dedicated public servant, I beaver away at my desk and plan my forays around our floor strategically. (Or… it could be said I’m lazy and put off doing things until I really have to!) So by the time my water bottle is empty (I drink a lot of water), I’m usually desperate to visit the loo (and so forth). And although I have been known to regularly very rarely take my iPhone into the loo to surreptitiously check Twitter and Facebook*, I would prefer not to take my water bottle with me. And… now we have a fabulous shelf outside of the facilities, so I can dump my water bottle there until I come out and go directly to the cold water fountain to fill it up – thereby maintaining my efficient working operations (and only having to make one trip around the floor!).

HOWEVER… within a day or two of the wee shelf (hee hee) appearing, a few additional items started popping up. Initially they were changed every day or two and I suspect some of us thought it a little joke of sorts. And yet, these ‘things’ are still there.

I’m pretty sure most of us are nervous about asking anyone else who the fuck is responsible in case we insult the culprit generous benefactor. And I’m sure they haven’t been removed by senior management for fear of offending anyone or perhaps, being seen to judge others’ taste!

Now niceties aside, is it just me, or is it odd for grown women (or men, I guess) to be placing such items in a workplace’s public space? I mean, I’m sure some staff have tragic cute little thingys on their own desks, but for someone to put such crap in adorn a public space in a work environment is just kinda freaky.

*Of course I am joking… I would never really take my iPhone into a bathroom of any kind. Really. Truly.