I’ve spent a lot of my life not liking myself. Not thinking myself worthy of love, relationships, success, happiness. You know, the usual stuff. But it was only recently I disliked the kind of person I’d become. (#spoileralert: it’s fixable. I think!)

Although life post my seachange didn’t quite go as expected – ie. I found it bloody hard to get a job; I eventually fell on my feet. I had a part-time gig which was almost perfect: Financially it was fine; though I felt like my mind was melting and I was deskilling. (More so than when I was not working, which was interesting.)

Then this project gig came up. It was only a couple of levels lower than my pre-seachange salary. So LOTS more money than I’d been earning. And though it was full-time it was only for one year. Naturally I’d hoped for an extension but one I could negotiate to part-time. 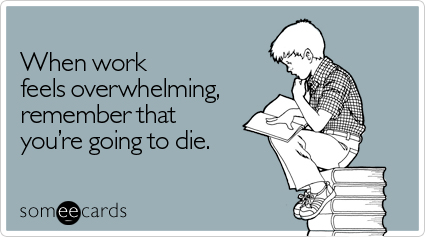 It kicked off just over a year ago and the job itself gave me enough intellectual challenge (more in a problem-solving way than a stretching my mind way) that it seemed like a marriage made in heaven. Or similar.

But things got stressful. And ugly. And I felt as if everyone thought I was doing a crappy job – indeed I assumed they thought I was. When, the sane part of me recognises that almost everyone only had positive things to say about my work.

Nevertheless my confidence felt undermined and I went into obsessive mode and kept plugging away as much as possible. I tend to thrive on a challenge but – in this instance – just really became more and more manic.

I could see it happening and I was falling back into old patterns of (a lack of) work / life balance I’d had pre-seachange. Binge-eating. Drinking wine on weeknights. Not wanting to do anything outside of work. Feeling really overwhelmed constantly and a bit of a mess. Mostly I was able to hide that. I whinged on social media but only my mother saw the complete meltdown.

More than that though I’d become this whining friggin’ victim who was all doom and gloom and filled with self-pity. I knew I was doing it but did it anyway. I was acting like a martyr. How wonderful am I that I’m all stressed and having an emotional breakdown of sorts?

Part of that contemplation led to the post I wrote a month or two ago. When it seemed no extension of the position would be possible and I started working out whether I wanted to continue trying to find a job at a similar level and stay in the full-time workforce and be able to live financially comfortably.

Or whether I wanted to cut back, have less stress, more time to write and actually like myself as a person again.

It sounds like a no-brainer doesn’t it? It certainly should be.

Is the money and comfortable lifestyle really worth it?

** Interestingly I drafted this (above) on my Italian holiday, while at the writing retreat. One of the things I really wanted to work out was whether I was brave enough to ditch the pursuit of money (well, pursuing jobs only because they pay well) and follow my heart.

It still seems like a no-brainer, but I know that I’ve often done the latter but then found myself unfulfilled or bored. AND stressing about money. **

Have you ever had that experience? What did you do about it?