Unlike Weekend AT Bernie’s my weekend in Brisvegas (aka Brissy / Brisbane) involved no dead bodies. It did however, include catch ups with some very old and dear friends and family as well as some lovely food and booze. Oh and there was a revelation or two thrown in for good measure.

Ostensibly I was heading to Brisbane for my bestie’s 50th birthday party, held just a week or so after her actual birthday.

I spent Friday night with the birthday girl and her partner and it’s always easy and comfortable staying with LJ and A because LJ and I go back to our Uni days. She and another couple of friends from that time (who were at the party on Saturday night) were probably the first friends I made and kept post-school. So… those friends you choose yourself rather than being borne from circumstance. 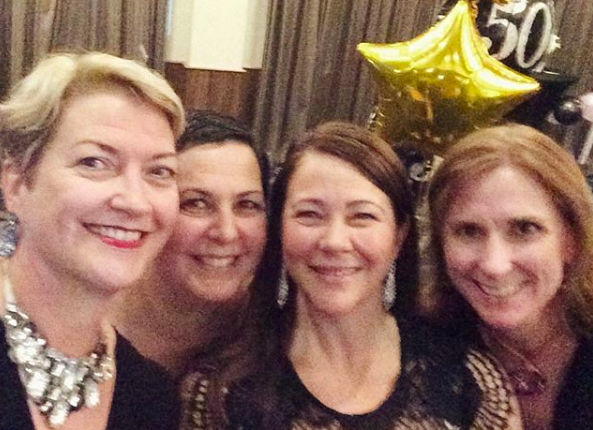 I’d picked up some champagne and red wine enroute and we got some AH-MAZING takeaway from a place called Paw Paw Asian Kitchen.  I’m not sure if it’s a ‘chain’ as such but there were heaps of gluten-free options for me and the Wagyu Beef Green Curry was TO DIE FOR. And I was reminded how much I miss having gazillions of takeaway choices (a double issue for me now cos of the lack of gluten-free options on the Fraser Coast AND the fact I live 10km out of town and no one delivers there!).

Saturday involved a trip to a nearby shopping centre to pick up some birthday supplies. It was a place I used to frequent and I was gobsmacked at how much it’d grown in the 5.5yrs since I’ve left Brisbane.

There’s something surreal about visiting old-ish haunts. They’re new but familiar all at the same time. Some shops hadn’t moved (and have probably not done so in decades) but then there were new fabulous shops like Gorman and Tigerlily (whose clothes I love but would NOT fit into!).

LJ was expecting other visitors the night of her birthday so I’d booked into a nearby hotel. Which was even more surreal cos this place was such a dive two decades ago, though now charging $175/night for a room.

In between some decorating, checking-into my room and a pre-party snooze I also managed to catch up with my bro and niece at my (our) favourite Chinese restaurant (which I’ve raved about here before).

The party theme was black, white and bling which was pretty easy for me cos HELLO?! how many black clothes do I own? And I had plenty of bling on hand.

I taxied to and from the party venue and felt a bit like a country-hick for not using Uber…. as I remain an Uber-virgin and haven’t joined or downloaded the app or anything.

Like Cinderella I was home (in my hotel) by midnight – complete with back-up / dancing shoes – and though I’d mainlined champagne all night I was happily merry and not roaring drunk.

I’d attempted a last-minute catch up with a friend Sunday morning which didn’t pan out but decided I’d head down to Bulimba (another of my old haunts) to have brunch and check out the shops before heading home.

When I woke however I really just felt like getting home. Or more importantly, BEING home.

My weekend – although only half over – had been great but I missed my sofa. My bathtub. My bed (and my pillows). Etc etc.

Dorothy said it best…. “There’s no place like home.” (Though it was great to see old friends & family on my fleeting visit to Brisbane this weekend!) #frasercoast

I prevaricated though. It felt wasteful NOT to potter around the shops and enjoy city life a little. I chastised myself and my slackness before realising…. it was bloody well okay and I could do whatever the frig I wanted.

Regular readers will know I’m far too governed by SHOULDS and MUSTS and guilt and the like. So deciding I couldn’t be arsed making the effort – even though I ‘might’ enjoy it – was okay; and I jumped in the car and started the 4hr drive home before 9am!

So, my takeaways – other than the delicious Thai food from Friday night? Spending time with good old friends is always a pleasure. They’re like the old Nike sweatshirt I pull around me every winter. Oh, and then there’s the fact that when you’re a grown up you are basically allowed (within reason) to do whatever the hell you want, cos life’s short etc etc.