We’ve had some scary weather here in Australia over the past few years. It feels like it’s progressively gotten worse and though I’m a supporter of the science of climate change and the fact we need to address it, I’m not going to get into that debate here. (I’d prefer to leave it to the experts on Twitter! 😉 )

It has to be said – however – that here in Oz we’re luckier than most / many countries, when it comes to earthquakes, typhoons and the like.

Yet here in Queensland we’ve recently had some devastating floods involving the loss of human life and damage of significant infrastructure and floods ruining the livelihood of many. In addition, recent bushfires further south have been scary beyond belief.

However…. the other day I saw this….

And I’ve been pondering on it ever since.

The Twitter-user in question is a journalist. I suspect he’s approximately my age. And my immediate reaction to reading his tweet was… YES!

Over the past two weeks (here in Queensland) we’ve been plagued by storms and potential storms. As a regular user of Twitter every time I checked in I was bombarded with endless tweets in CAPITAL LETTERS!

What makes the warnings worse is that they’re constantly retweeted. And I seem to follow a myriad of organisations which feel a sense of obligation to issue warnings. So my Twitter feed is full of capital letters and exclamation marks*.

One day early last week I (possibly inappropriately) tweeted this:

And it feels kinda true.

But… back to the sense of panic we all seem to feel nowadays when a storm is coming.

Obviously we (and our predecessors) have been experiencing thunder and hailstorms FOREVER. Before Twitter we had annoying sirens blasted on the television and radio, warning of coming storms and cyclones. Otherwise it was just dad racing to put the car under cover cos ‘the sky looks a bit green’ (and therefore hail was a likelihood). And I suspect the generations before that were the same… they simply looked at the sky, scratched their chins and said…. “Looks like we might get a storm,” while gnawing the barely cooked leg of an animal they killed with their bare hands!)

Indeed, when I was a kid, hail was really quite exciting. We’d race outside to try to get some pieces before they melted. Storms were a fact of summer as was low-level flooding.

My family spent every second summer in far western Queensland and many-a-time had to leave in the middle of the night because it was raining heavily and we were worried the Bulloo River would flood and we’d be stuck the wrong side of Charleville.

Prior to the devastating floods of recent years we’d been in drought. The government had practically rationed water; and controversial dams, desalination plants and water treatment plants were in train. And then the rain reappeared. 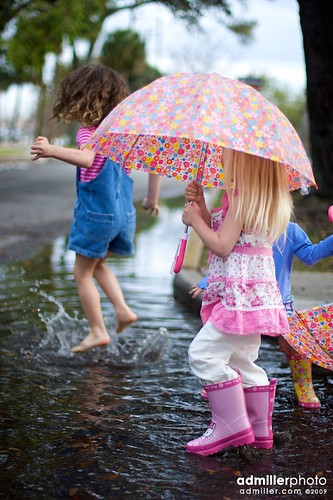 Now, no way in hell am I trying to minimise or diminish the impacts that the terrible floods of 2011 or various cyclones have had on our infrastructure, livelihoods and our emotional wellbeing.

I’m really not trying to be flippant: the flash flood through Toowoomba in 2011 was one of the worst things I’ve seen; and recent storms in Queensland have damaged infrastructure – reminding us that mother nature can be deadly. But (at the same time) I can’t help but wonder we’ve become overly cautious and always imagining the worst possible scenario – and sharing that fear with future generations?

I think it’s sad that we’ve had to become so paranoid. Sean’s tweet above suggests that government and the media are responsible for fear-mongering, but the stuff in my Twitter feed from mere mortals is as dire as any media report*.

I guess what I’m saying is that I understand that many people have become nervous about what summer can throw at us; but that I’m hoping for a few summers of ‘innocuous’ storms and bushfire-free seasons to again see bad weather for what it is – not always a threat or something to be feared – but something that’s occasionally beautiful and (though frustrating)… definitely something we can again learn to live with.

Do you think there’s a possible balance between wariness of storms or (fires and the like) and full-scale panic?

*Having said that, I think Twitter is the best thing ever. It allows anyone and everyone with access to the internet to be kept informed and have access to news and information to which we once would not have been privy.

I’m belatedly linking up with Essentially Jess and IBOT today!

PS. Please note that while I love the notion of kids playing in puddles, I’m also not condoning dangerous behaviour like playing near creeks, drains etc. #disclaimer!