I don’t wear make up. I’ve mentioned this a few times. The fact is, I can’t wear makeup. Or moisturiser. I start to sweat if I have ANYTHING on my face.

I mean, I sweat anyway and my friends will attest to the fact that I rarely come home from outings with dry hair – which is why I kept it short for so long. The excessive sweating thing is called hyperhidrosis. Some get sweaty palms, others underarms and the like. For me, it’s my head. There’s some medication you can take, but it did little for me.

The facial sweating thing stresses me out and makes me very self-conscious. As a result – in terms of makeup – I’ve really worn only lipstick since the early 1990s. 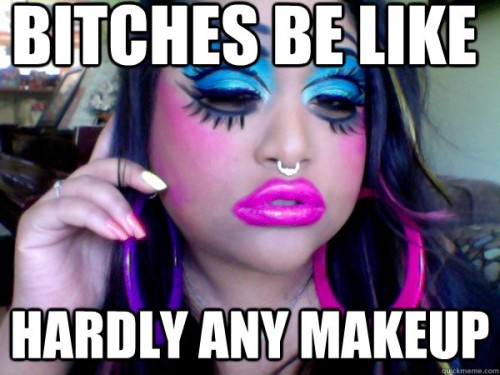 I recently mentioned that I introduced my mother to Nikki Parkinson’s Styling You blog over a year ago. I’d sent her a link to a post we’d been discussing and she decided she wanted to read more, so I showed mum how to ‘like’ Nikki’s Facebook page and… the rest is history – and the reason why my cupboards are filled with thin velvet coathangers etc.

The post to which I’d referred mum was one Nikki had written YEARS before about BB Cream. Given my inability-to-wear-stuff-on-my-face I’d skipped the whole BB Cream phenomenon, but when my mother talked about wanting ‘some’ coverage without having to use expensive makeup all of the time, I remembered everyone singing its praises.

Fast forward a day or two and my enthusiastic mother had tried then purchased several (like 10 – cos they were on sale) tubes of Garnier BB Cream. I got one as well. For good measure.

I’ve tried to use it once or twice – when I know I’m going to be in airconditioning or similar and think it might not melt off.

However – having recently read Nikki’s book – I’ve been thinking I need to make more of an effort. And rather than get out of my stretchy ‘home’ wear in which I wallow – day in and day out – I thought I might again try to use the BB Cream. As I understand it, as well as providing ‘some’ coverage for my blemishes* and freckles, it’s actually good for your skin.

So, I’ve decided I’m going to try and push through the face-sweating thing. For a month. I’m setting myself a little February challenge:

For the 28 days of February I will apply BB Cream to my face once a day.

Ta-Da! Obviously if I’m going to the gym or exercising I’ll leave it until I’m home and showered, but EVEN IF I’m just sitting at my desk in my ‘home’ wear I WILL PUT THE CREAM ON. If it slides straight off so-be-it. If it makes me get super-hot, sweaty and irritable, so-be-it. It can slide off my face but at least I’ll have tried. Perhaps my body will develop some sort of immunity or something and will get used to stuff being on my face. Who knows?!

No doubt I’ll let you know how I’m going. In the meantime watch out for despairing, “I’m melting!” tweets.

Do you wear makeup? Often / ever? A full face or just minimal cover?

PS. This post isn’t sponsored by anyone. I’m only using Garnier cos it was the cream I’d heard of! (I possibly don’t even have the right colour, but #whatevs)

* My fingers have never met a zit or spot they didn’t want to squeeze! 🙁