My mother tells me when I was little I used to run to her to complain about something (most certainly nefarious) that my brother did. She’d say, “Oh, he’s a naughty boy!” and I would run off happy to have been reassured of my brother’s naughtiness and sufficiently consoled to continue on my merry way.

I had a fight with my brother last week (and won’t he love me talking about it here!?!?!). We no longer live in the same town, but I do occasionally seek his advice on technical matters (which printer to buy, stuff about phones and so forth). Anyone who knows us will completely understand what I mean when I say that the fight was a result of my neediness and frustration and my brother’s (occasional) supercilious attitude (and his own frustration, I’m assuming). It ended with me doing an Adam Hills (which for my o/s readers involved an Australian comedian getting shirty at Joan Rivers for her Adele ‘fat’ jokes and ended with him/me saying “F*ck you!”).

Because I rehash everything in my mind again and again, I’ve thought A LOT about the ‘fight’ we had – ultimately the result of the fact that (in my mind) the ‘seeking advice’ part was over and I needed comfort and reassurance NOT an ‘I told you so’ type lecture.

Years ago when I worked in the social sector (with a lot of social workers and psychology graduates – like yours truly) I had a friend who seemed COMPELLED to constantly provide advice. I wondered at the self-awareness of her other friends given the patronising suggestions she’d throw at me. “I know when I’m bloody projecting!” I wanted to say to her, “I’m not stupid!”

The constant unsolicited advice meant that I had to stop confiding in her. In reality I just wanted a sounding board. I wanted a friend to comfort and reassure me, not tell me what they thought I should be doing! I just wanted someone to pat me on the head and say, “There there, it’ll be alright.”

In my diet blog I often rant or rave about my bad habits and my inability to follow through on what I know I SHOULD be doing.

As suggested by the blogging doyens, I’ll end my posts with a question (a call to action it’s called in blogging / content marketing spheres) but it’s rarely one which seeks advice… more likely it asks readers about their own thoughts, feelings or behaviour. Although recently in my other blog I’ve offered readers the opportunity to confirm my own genius. (And I’m a bit disappointed more of you haven’t taken me up on that offer!)

I don’t ask for advice in my posts, because I don’t want it. I’m just sharing my story. My frustrations. My failings. If I want ‘advice’ I’ll seek it from experts – which I sometimes do.

A blogging friend recently suggested my posts could offer a more definitive stance on certain issues. I was surprised initially cos I’m hardly an expert who should be telling others right from wrong.

But it made me stop and think about my blogging and what I’m trying to achieve. Should I be doing more reading and research, I wonder, to provide useful information to my readers? Certainly there are a lot of bloggers out there who are exercise physiologists, nutritionists and therapists who have a wealth of information to share with their readers. But I don’t really feel qualified to offer up content which I believe to be ‘right’. 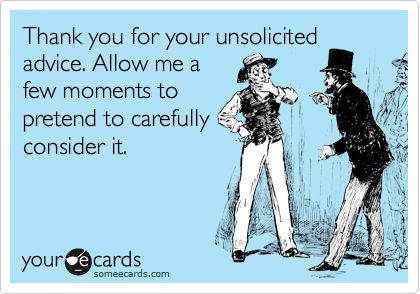 At the moment I share what works for me (and what doesn’t), but know that doesn’t mean it will work for someone else. If readers want to try something I’ve tried (and succeeded or failed at) then it’s their decision. Perhaps my own disinterest in unsolicited advice means I’m loath to offer it to others as well.

How do you feel about unsolicited advice?
Or perhaps you are an advice-giver?