I mentioned recently that I will be turning fifty late next year and decided I might not be quite as depressed about the fact if I had some challenges to undertake / things to look forward to enroute, and did a half-hearted call-out for ideas for my pre-turning-fifty bucket list.

Quite frankly I am disappointed in you all as you were spectacularly unhelpful. So I’ve had to come up with my own, although I only have four thus far. The fifth will hopefully arrive via a bolt of inspiration sometime soonish. (Cos #4before50 doesn’t have the same ring as #5before50.) 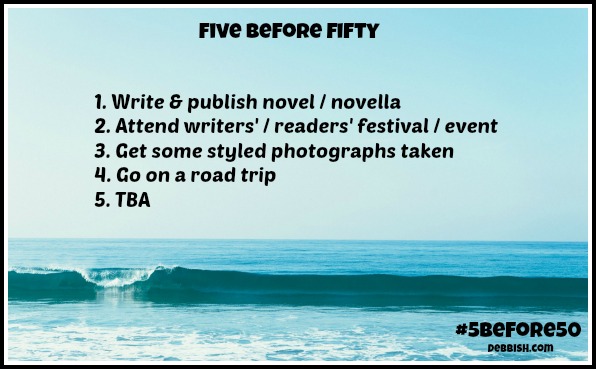 And… before everyone goes defending the ageing process or the milestone itself, be assured I’m not overly depressed about the fact. I think I’ve finally come to some internal resolution, that things I might have wanted from my life just won’t be and I need to accept life as it is.

And (#sorrynotsorry) quite frankly I get sick of those who’ve got partners / husbands / been in love or loved and (or) have kids telling me it’s not so bad. Although this puts me at risk of sounding pitiful and / or full of self-pity… having never been in love, in a relationship and / 0r had a family or one to look forward to (at / by) 50 is really kinda depressing in a soul-sucking way.

I realise – of course – it’s my own doing (along with fate’s, perhaps) but… the new improved and more-zen me, has accepted that stuff. Sure I might find love at 80 when I’m in the old-age home and bed-hopping is rife… and may – some day – get married. But it’s not something I’m counting on. Ever. Indeed, I’ve learned not to make assumptions when it comes to my life. Plus I see a lot of problematic relationships and children with various issues, so perhaps I’m the one who got off lightly?!

But back to my point.

I’ve already shared my first three bucket-listy things here and as I don’t want to justify the vanity of the photo thing again I’m just linking back to that.

I’ve since added one more item to the list – inspired by a book I saw when I bought my own Bucket List book*. 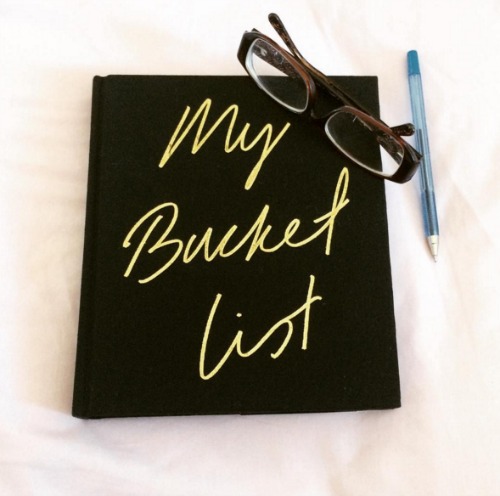 It was a journal for a Road Trip. Now though I’ve done some road travel – driven the length of Queensland myself to move towns, driven south to Sydney, not to mention the fact I generally hate driving – I kinda like the idea of a road trip with friends. You know the kind (over a few days, rather than weeks) where you stay in old country pubs and it’s more about the experience than the destination. Of course I think I’ve been influenced by movies involving cadillacs, but still… the idea of driving somewhere just for the sake of it is something I’ve never done. Ever.

So… ‘road trippin’ is number four.

Number five is yet to come and suggestions are very welcome.

Some of my items are a little complicated so it’s not just a matter of ticking them off… rather they’ll take some months so I’ll need to get cracking!

Any suggestions for number five? Any pointers for actually ACHIEVING the stuff on my list?