Pageant day dawned and I was relieved not to have a hangover – thank god I didn’t open the bottle of red wine in the mini bar after polishing off the champagne! I was feasting on my room service breakfast when my sister-in-law and niece arrived and greeted them warmly with bacon and egg breath. The Divine Miss Em already looked stunning, in a dress that I apparently paid for compliments of some birthday cash, though it wasn’t one of the three outfits to later grace the Pageant stage.

Her hair was mostly done and her mother set about doing her makeup while I continued to munch my way through my bacon and eggs. I’d already had a bit of a run-down on the day’s program. The three categories were: beauty, which involved wearing something pretty and sparkly. For the toddlers this usually reflects the short sequinned cutesy outfits which typify pageants. As the girls get older the dresses get longer and a bit less sparkly. The hair is always well-coiffed and hairpieces are often added to provide extra pizazz. Or something.

Given the outbook theme, the second outfit was ‘western’ in nature. I found it interesting that all of the costumes very much reflected the US cowboy scene, with no akubras, drizabones or wifebeater singlets in sight. Whereas in the beauty segment the girls walk in a poised manner across the stage, the other sections seem to allow a bit of personality to seep through with all contestants preparing routines to music. And – thank god my niece was a bit inventive and went for Will Smith’s Wild Wild West – cos if I’d had to listen to Cotton Eye Joe or Boot Scootin’ Baby one more time I may have had to asphyxiate myself with hairspray fumes.

Finally there was the outfit of choice. My niece had gone with a dress worn by her grandmother 50yrs ago, boofy hair and a song from Hairspray. I mentioned before that she can dance. Well, it serves her well in pageants and she got a big cheer after that performance in particular.

I was expecting it to be a bit more like TV’s Toddlers & Tiaras, but perhaps US pageants aren’t like that either. I know it may shock you, but possibly, just possibly, the reality TV show is a bit less ‘real’ than it espouses to be. Just possibly.

Like the US show though, the event was held in a room at a hotel, with a tiny stage up the front and rows of chairs behind the judges. The organiser hails from the US (or possibly Canada – I mean, who can tell?) though wasn’t quite as OTT as some of the organisers and emcees I’ve seen on television. What surprised me most were the low numbers. There were only 13 competitors across the four age groups. The organiser though, is slightly between a rock and a hard place. With pageants having SUCH a bad name here at the moment, it’s not a case of ‘any publicity being good publicity’ so promotion is minimal.

But I wasn’t disappointed. There were toddlers. Four littlies competed in the 0 – 3 year age group. Despite their lack of professionalism (hmph, amateurs!) they were almost the most entertaining. One little one refused to leave the stage. Another performed like a trooper and was particularly expert in blowing kisses. One was a baby who slept through one of the sections (the mother carrying her on stage….) and the final girl was the spitting image of the US pageant-Queen Eden Wood.

There were tears. Of course. Though not because of anything pageant-related. One of the littlest ones just screamed and cried a lot. Bizarrely she won a lot of prizes in her age-group. Perhaps it was a case of ‘the squeaky wheel’….

Before we arrived I asked my niece if I had to ‘woo-hoo’ cos I’m not much of a ‘woo-hooer’! But I’d seen that on television. The chubby mothers or fathers who cheer and ‘woo-hoo’ their kids. I think the Divine Miss Em merely rolled her eyes at me. I also kidded that I would leap about behind the judges demonstrating what she should be doing and pointing to my mouth as a reminder to smile. That drew another look of derision. Possibly because she holds dozens of dances in her head at any one time and doesn’t need prompts. Or possibly because I can’t actually dance.

Some of the mothers did prance about though, reminding their daughters of their routines. I have to admit that’s the only time I cringed a little…. some of the mothers being a bit overly engaged in the whole thing. Who are they doing this for again? 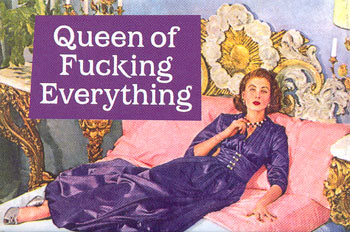 My niece was stellar. Absolutely beautiful and her choreographed routines were great. She’s a good little actress so played her characters with exaggerated ease. The judging was a bit of a surprise, though of course it must be SO subjective and I MAY be biased. Just maybe. The Devine Miss Em narrowly missed out (by only 4 points we believe) on another Grand Supreme title, instead winning Miss Teen Queen. She was a bit disappointed, but stoically talked about looking at her performances and what she should do differently in future.

Pageants have had a lot press here recently. Frankly I think anything that involves too many women is prone to bitchiness. Netball used to be the same. But yesterday I didn’t see fake tans or toddlers dressed inappropriately. The mothers had all done their daughters’ makeup and hair and none looked like they were heading for trouble. And everyone won SOMETHING. In fact, I’ve never seen so many tiaras and sashes in my life.

The whole thing was over by lunchtime and with a sigh of relief the mothers and families packed up their gear to get back to their lives. My niece and sister-in-law were remaining in town for ballet eisteddfods, but I had a finale party to attend for my weight loss program. Attending the pageant had meant I’d skipped a group training session (though as about 800 were there I suspect I wasn’t missed), but I was super excited about meeting participants on my program from across the country. I’d been communicating with many of them via Facebook, Twitter and program Forums for the entire 12 week round and keen to see them face-to-face.

So I began the trip back to my hometown.

I bet you’ve been wondering about the tantrums. Yes? Sadly it wasn’t a two or three year old toddler throwing tantrums, but rather a 43 year old woman. Me. Yes me! I’d already had a meltdown about the hotel room on Friday night and proceded to have two more during the three and a half hour logistical nightmare it took me to travel the 100km home.

I decided to catch a bus to the train station so waited for about 20 minutes at a bus stop near my hotel. I was about to give up and get a taxi when the bus arrived. Having paid my fare I settled back looking forward to getting onto the train and heading home. But then in response to my query the driver explained that the bus I was on takes a roundabout route to the train station and it would take about an hour to travel the few kilometres. WTF?

So I alighted to catch a taxi instead. Trains departed half-hourly and I had 20 minutes until the next one. Finally a taxi arrived and the driver told me we’d EASILY make it to the train in 15 minutes. About 20 minutes and $40 later we arrived at the train station just as the train was leaving. FUCK! Not only had I wasted the money on the taxi, but now I had to sit at a cold windy train station for 30 minutes until the next train. I was furious. I called my mother…. as you do when you are in a foul mood. And if you are me. Between sobs I told her that I was now going to be much later getting back to my place and wouldn’t have enough time to prepare for the finale party that night. She attempted to calm me down – which almost worked, though I suspect it was the idea of railway station staff seeing a grown woman cry which did the trick. “I’m not going to the finale party,” I told my mother. She – as mothers do – told me not to be silly and reminded me I’d regret not going. “It’s all just too much,” I sooked to her. It sounds ridiculous even to me. And…. sure I knew that it wasn’t really the 30 minute delay which worried me. It was just EVERYTHING. Not knowing what to do about my place and the stress of the past few weeks. I just felt incredibly overwhelmed.

Finally I got on the train and we were on our way. I knew it was an hour trip and was relieved that I’d make a connecting train and be home a couple of hours before I had to dress and go out again. Except… there was a delay. So I missed the connecting train. Just. Again I was going to have another 30 minute wait. But this time I was closer to home, so I decided I’d go and catch a taxi. With my new taxi company iPhone App I searched for the nearest taxi rank. Bloody useless piece of shit! It suggested that the nearest rank (in my capital city) was in another town hundreds of kilometres away. WTF?! Again! So I started walking assuming I’d hail a cab. Taxi after taxi (some empty, some carrying passengers) passed me and NOT ONE stopped. I lugged my bags for over 20 minutes before contemplating whether I could return to the train station to get the train I initially decided not to wait for. Feeling a tad overwhelmed yet again I ended up standing on this busy road with tears running down my face. Shameful, I know. I had no idea where the nearest rank was and had no location to give a cab company if I called them. Just when I was about to throw myself down onto the bitumen pavement and sob, a driver stopped. I suspect my hysterical and effusive thanks scared the shit out of him. But… finally I was home.

Feeling even more exhausted than I thought possible, and not having eaten since breakfast, I realised I only had about an hour to bathe and prepare for pre-party drinks. So what did I do? I poured myself a glass of champagne and spent 30 of the 60 minutes in the bathtub wondering how the hell my day had gone from the blissful time with family that morning, to tears and tantrums about public transport. Of course the champagne – or the idea of champagne – made everything better, so I dressed, got in YET ANOTHER taxi and went to party with people I barely knew. And I had a ball!