I don’t usually post into my diet blog on weekends. You know… one shouldn’t work on the Sabbath and all of that. Actually being cheerfully agnostic it’s actually more cos I’m lazy and get tired of sitting at a computer on my fat butt more than I should…. but the first reason sounded better.

As it happens, today’s post isn’t in keeping with the usual theme of that blog, so I figured it’s okay. Plus I’m a bit hungover so sitting in front of a computer feels better than moving in general. And… as the post wasn’t diet-related and doesn’t reveal anything terribly embarrassing about myself I figured I’d post it here as well.

Anyone wanna buy a townhouse?

I’ve had a pretty interesting week or two. The 12-week weight loss program I was on finished up with last chance exercise sessions, final weigh-ins and measuring. I’d started a ‘learn to run’ program so was trying to fit that into my working week. I had an interview for a promotion at work; and spent a long long weekend away visiting my parents. I returned this week to play catch-up at work and just in time to attend an auction to sell my house. Because I usually stress about the small stuff, I’d been very zen-like about the house thing. Naturally… because packing for my trip away and getting to the gym was WAY more important.

I’d been horrified to discover I had to attend the auction and (hopefully) watch people bidding on my pride and joy. The notion of being judged or my value measured was a tad daunting. My place was 9th out of 10 being auctioned on Friday morning so I sat patiently watching others mostly not-selling, daunted by the knowledge that only one person was registered to bid on my place. Of course, the bidder in question didn’t match my reserve and my house was passed in. I wasn’t overly shocked and was mostly okay, but got hammered by my Real Estate Agent and her boss after; double-teaming me to make sure I knew how insane I was; thinking I’d get the price I wanted and why I should just take what was on offer rather than holding out for more.

Cap in hand, I headed back to an important work meeting I’d had to sneak out of to partake in the humiliating-debacle-that-was-the-auction.

I made it through the day and then jumped directly on a train to commute to a nearby coastal town where I was overnighting. My niece was participating in a beauty pageant there and I was thrilled she asked if I wanted to go and watch. I don’t travel much any more so the idea of my ocean-view room was appealing and I fantasised all day (including through the humiliating-debacle-that-was-the-auction) about sitting on my verandah imbibing in more champagne than sensible…. as the stress of the day and week slipped away.

My view. Ocean somewhere out to the right. Apparently!

But… the ‘ocean-view’ room that I’d upgraded to was actually on the highway side of the hotel, rather than on the ocean-side. It was true (in daylight) I could see the ocean, but it wasn’t what I’d expected (having paid an additional 40% for the aforementioned room). So, I felt deflated and may possibly have had a mini tantrum, spending the first few hours of the evening seething, grumbling and issuing grumpy tweets – until the room service champagne arrived (of course) and I started drinking the comforting elixir.

With nothing on TV and no appealing in-house movies I actually read an entire novel in the large spa-shaped bath as I knocked back my champagne…. interrupting my reverie only to partake in some room service dinner – which, incidentally was delicious.

The hotel I was staying in was hosting the outback-themed pageant so we’d arranged for my sister-in-law and niece to come to my room early the following morning which would be converted into a dressing room for my niece who required three changes of outfits for the competition.

It was to be her second pageant. I suspect it was because of the reputation pageants have (thanks to television show Toddlers & Tiaras and surrounding media) that she kept her participation in her first pageant a secret, only revealing it to a few friends and family after she’d competed. My niece, the Divine Miss Em dances a lot and I suspect that both her beauty and stage presence contribute to her success in pageant world, and she was crowned Grand Supreme in her first competition. For those who think I’m talking about pizza, the Grand Supreme is the highest award you can win and is given to the overall winner across all age groups. 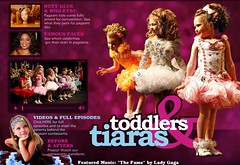 And for those thinking that the Divine Miss Em is a 5yr old toddling about a stage in sequins, a fake tan and false teeth, she’s actually (now) 15yrs old, whippet-smart and eminently sensible for a teenager. And her mother though not unsupportive of her desires, was happy for her to enter pageants, providing it involve minimal out-of-pocket costs… so not like the pageant moms you see on US television.

I saw the photographs of her in the first pageant and she looked absolutely stunning. A worthy winner that’s for sure. So this pageant, the third of its kind in Australia, was about to be her second and this time she had some experience and knowledge of the world under her belt.

And though I didn’t know what to expect I was stoked just to be there and part of it all. And Friday night, having indulged in the champers and the book, I wrapped myself up in the soft bed linen and prepared for the early arrival of my guests and an action-packed morning complete with toddlers, teens and tiaras.