Some time ago I shared a clip from the Like A Girl campaign. It was basically reminding us that – ‘we’ (women, men, boys and girls) aren’t born with certain perceptions or ideas. We develop them over time thanks to our families, friends and society.

When asked to ‘run like a girl’ older women and girls exaggerate their style in a negative way. Younger girls, just run. Like a girl. In the post I share a quote from the clip where one young girl’s sounding puzzled when the ‘like a girl’ phrase is used. “It sounds like you’re trying to humiliate someone,” she said. She doesn’t get it. Thank god.

In that blog post I also said I was raised in a household where – sports-wise – it was never considered there was stuff I couldn’t do because ‘I was a girl’. But I suspect I was one of the lucky ones.

Blogger Yingyang Mother brought this clip to my attention on the weekend – created as part of the This Girl Can campaign by Sport England. I shared it on Facebook at the time and noticed other sites sharing the video as well. I was later surprised to see some comments from those who believed it to be patronising. Or unnecessary.

But me – well, I’m its target audience and I think it’s friggin’ amazing. It features women of all shapes and sizes and all abilities. It reminds us that whatever it is we do, it’s okay. Whether we’re playing competitive sport, at a Zumba class at a community hall, or paddling about a pool. 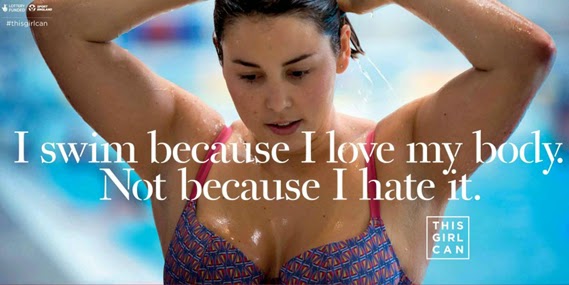 It’s kinda depressing these kinds of ads are required at all, but it’s a reminder many of us need.

We can do it because the only the only alternative is saying we can’t. And we really don’t want to do that.

What are your thoughts? Motivating? Empowering? Patronising?
PS. Apologies for the ‘Get Ur Freak On’ earworm as I’ve been hearing that song in my head all week. #loveit