Some bloggers I follow, SkinnyEmmie and Big Girl Bombshell, recently posted ‘things you may not know about me’. Although this is completely unrelated to the usual theme of this blog, I enjoyed reading their confessions and – because I know you all find me so interesting – I thought I’d share my own secrets.

My childhood best friend (and neighbour) and I wrote a book while at primary school
The book was called Tania and we wrote alternating chapters. I was unhappy with the ending (she’d taken something out of a Mills and Boon novel which was a bit OTT to a pre-teen like myself) so – in a fit of temper – I ripped the entire thing up. Unbeknown to me my friend, Michelle, got it out of my bin and pasted the pages together (it wasn’t that long obviously), made a cover and presented it to me. Years later I gave it back to her as a gift. I would like to think she still has it. The book, incidentally, was a pre-teen romance type thing. Of course. Much of the novel was spent describing the clothes; and naturally Tania, the novel’s namesake wore attractive pantsuits and muted makeup, whereas the school bi-atch (and Tania’s rival-in love) wore lime green and purple and too much makeup (which back in the 70s was just not done in polite society)!

My childhood best friend (same one) and I used to stage shows
In our pre-teen years my bestie and I staged a couple of shows for our friends (one of which was captured for posterity on Super 8 film and features a number of us performing plays and dancing for a small audience of friends sitting on plastic chairs in my backyard). I recall another show staged (in our carport) for our mothers. I remember that the latter involved Abba songs as, back then, I had a particular penchant for Tropical Loveland. Although not a natural performer, as a youngster I used to climb onto a large barbeque structure we had in our backyard, using it as a stage. So much so that another neighbour presented me with an old silver non-functioning microphone he found at the local dump (in the days before toy microphones were readily available. Obviously.) By the way, it’s important to understand at this point that: I cannot dance; and I cannot sing!

For such a heathen I had a relatively-religious upbringing
You wouldn’t know it now, but my brother and I both attended Sunday School as youngsters. I followed in my mother’s footsteps and even taught there briefly but really only recall getting the kindergarten kids to colour in pictures of Jesus, wise men, donkeys and the like. For his sins (Hee hee!) my brother was briefly an altar boy (and we have the pictures to prove it!). I now class myself as agnostic, but my brother probably would say he’s an atheist. My mother still attends church religiously. (Hee hee! God, I’m on a roll today!)

I loved (loved loved) Barbie dolls.
I had a few other dolls (but really only remember one or two of them – including one whose auburn hair grew out of a hole on top of her head when you pushed a button – but was mad for my Barbie dolls. I inherited some from my aunt or someone, but scored them as presents on a regular basis. 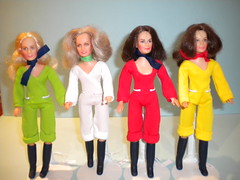 My mother, who occasionally made my clothes back then, also made me a heap of clothes for the original dolls. As a result, my collection of Barbie dolls and their wardrobe was impressive!

Better still (given my love for all-things-television) I also had a Steve Austin (Six Million Dollar Man) doll – purchased as a surprise gift after becoming inconsolable when Jamie Sommers (the Bionic Woman) died in the TV show. Little did I know she came back to life (a couple of times) and later had her own TV show. I also later got a Jamie Sommers doll. I loved that you could roll up the skin on their arms or lift the flap in their legs to see their bionic bits. And… just as amazing (and in retrospect, tragic!) I also had a set of Charlie’s Angels dolls, including the three originals from the TV series, and Cheryl Ladd as Farrah Fawcett’s replacement. 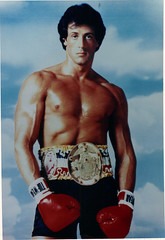 I know, I know, WTF was I thinking? I now agree, but at the time I LOVED Rocky. Not Sylvester Stallone of course, as I was possibly in denial that there WAS a Sylvester Stallone, who was significantly older than the teenaged me but by the time Rocky III came out I was besotted. My brother (who was much nicer to me way back then and who lived in a capital city with non-tragic radio stations) actually TAPED a radio ad for the movie when it came out. I listened to the 30 second ad so much at the time I still remember the lines!

Rocky to Adrian: “Nothing is real if you don’t believe in who you are.”

So there you have it – a few things that (unless you were there at the time) you didn’t know about me. Obviously I haven’t delved into any childhood traumas (other than the mistaken perception that the Bionic Woman died) or uncovered any deep dark secrets in my past… but I tried to think of tidbits that had previously remained hidden. The more embarrassing secrets (pissing on the stage during a dance performance when I was 5yrs old; or TV commercials I did in high school) will have to wait until another time!