I finished watching Season 1 of American Horror Story on the weekend. Well, in fact, I basically started AND finished the 12 episode series in little more than a day.

It was highly addictive – on so many levels, but in the end I just HAD TO KNOW WHAT HAPPENED!

And I have to say, episodes 10 and 11 were stunning. Gobsmackingly amazing. I was completely floored at one stage and had no idea what had been coming. Obviously I can’t talk about it at length without giving the storyline away.

I must confess, however, to being a bit disappointed with the last episode. It attempted to wrap things up a bit too neatly, which didn’t fit with the series which aimed to keep you guessing.

Naturally not everything was explained – which would have paved the way for Season 2, except that it appears to be going off on another (albeit equally-alluring) tangent entirely. 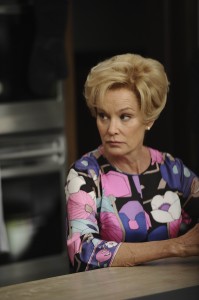 In my last post about the show I commented on the quality of the cast. Jessica Lange in particular is a standout. In a good way. And… well… not necessarily in a good way.

She’s the kind of person who really just shouldn’t be a mother. Her treatment of her daughter who has Down Syndrome is head-spinning. Regretting the day she was born in one breath and showering her with love in the next. Freaky.

Jessica Lange’s pedigree as an actress is unquestionable, scoring her first role in the 1976 remake of King Kong.

In 1982 Lange became the first actress in over four decades to be nominated for Best Actress (Frances) and Best Supporting Actress (Tootsie) at the Academy Awards in the same year.

And the prize-winning fun did not stop there.

A Goodwill Ambassador for UNICEF, Lange could not be further from the devious and often-quite-evil neighbour from hell she plays in American Horror Story. She claims almost every scene she’s in and delivers a number of monologues (like the one below) with brilliant determination. It’s obvious from the get-go that Constance Langdon, the former owner of the haunted house, knows WAY more than she’s willing to let on.

If you haven’t entered my competition to win a copy of American Horror Story Season 1 on DVD, you still have time to pop over here and leave a comment.