Today’s post was going to be a really upbeat one… predominantly about how much I’m loving my new locale.

Well, actually it was going to be about the zombie apocalypse and Halloween, but in a good way.

It’s my second day in my new abode – the move took place Tuesday afternoon, a process fraught with stress because the removalists (who were booked in the afternoon and then asked to come ‘just’ after lunch) rang at 9.30am to tell me they were loading the truck and ready to deliver my stuff. What. The. Hell? I spent much of the day negotiating between the seller’s agent and my solicitor and the movers to prevent the latter from leaving with my belongings!

Yesterday my mother visited to help me unpack. She’s a bit of a potterer (not the kind involving clay) so happily spent several hours in the kitchen putting stuff away and sorting through things. Most of which I’ve since been able to find. Obviously I focused on the important things: getting my TV and TiVo connected (am yet to test I’ve got the DVD cords in the right places); unpacking and setting up my iMac; and unpacking all of my books. (Clothes and other stuff be damned!) 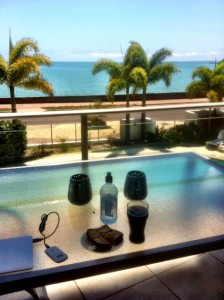 My views are stunning. Beyond stunning (brekkie today, to the left). I keep tweeting and Facebooking pictures so am expecting everyone to get pissed off at me any day now. I can see the ocean from almost everywhere in my apartment (‘cept the second bedroom and guest bathroom… but who cares about that?! Right?) I can sit here at my desk and look at the ocean just 50m or less away. I can lie in bed and do the same. I can sit on the loo in my ensuite and do the same. It’s magnificent. And bizarrely the Esplanade in front of my place is surprisingly quiet. On a few occasions I’ve almost felt I needed to ask if there’s something happening that I’m not aware of.

Has there been a zombie apocalypse and I’m the only human being roaming the earth?! Here I am, left on my deck, champagne in hand. Watching the world pass by. Or not as the case may be. The ocean and the clouds move, and occasionally the palm trees. But little else.

So I should be in seventh heaven. Right?!

I just had an embarrassing tantrum / meltdown thingy in front of a visiting electrician. Oh… and the on-site manager. Yes indeed, I’m all class.

So… join me if you will for my daily rant. Yes… you know you want to:

1. I can’t get the bloody ducted airconditioning to work. The friggin’ remote control won’t work – it’s dead, even with new batteries. So I sweltered in bed last night until I remembered that I could adjust the unit directly and used a roasting fork to poke the main control’s on/off button.

2. I have ceiling fans which do not work. Well, they possibly do but the remote controls which operate them are missing (presumably packed by the previous owners). I had an electrician come to have a look in case I was just being blonde. But no…. I need remotes. I have none. I will have to buy some more and hope they will activate the existing fans! 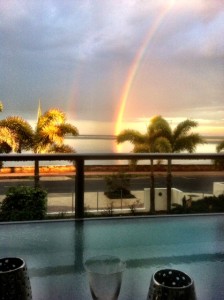 3. I can’t work the bloody washer / dryer. Not only is the handle broken but I’ve  never used a combination machine before so was chuffed I managed to do a much-needed load of washing earlier today. (I’m going through a lot of clothes sweating as I unpack!) But then after I removed the clothes I didn’t want to machine dry and I put the machine on dry I did something wrong, so the bloody lot is being washed again. As I write this. And the machine is bloody slow.

4. My mobile telephone gets no reception inside and barely any on the deck. This is problematic as I’ve only had a mobile phone (no landline) for some time.

5. My wireless broadband connection gets minimal reception. Occasionally I’ll get a couple of bars’ reception and I can get something done, but on the whole, my access is intermittent. Problematic given that I’m wanting to spend my time blogging and writing.

6. And finally, but importantly, the solicitors handling the sale and purchase of my properties have been eerily quiet since my sale went through last week. After many emails and much harassment I heard that the purchase went through this week but I’ve expected to have some money leftover after the exchange, so have been trying to confirm this.

Although I was sent detailed information about the money involved in my sale (including additional expenses etc) I’ve received NOTHING about my purchase. Today I received an amount they claim to be ‘left-over’ and it may well be correct (but is almost 1/3 of my calculation!) but unless they actually bloody communicate with me I don’t know if I’ve been duped or not.

So, rant over. I’d like to say I feel better, but sadly I don’t. (And I know that No. 6 was a bit of an over-share, but I’m alone and have no one else to whinge to. And I think another tantrum in front of the building manager should probably be delayed as long as possible!)

Do you think venting ever helps?