Years ago I worked with someone who used to go on (and on) about the traumas of being single. I would have had some sympathy for her had she not been talking about a one-year period in her life. She’d been married for over 10 years and then divorced. I first met her when she was recently separated and a tad depressed. She’d married young so struggled with singledom.

By the time I worked more closely with her a year or so later she’d met someone online and was practically engaged. Again. As a forever single person I found it hard not to roll my eyes when she commiserated with me about the difficulties of being single. “When I was single….” she’d start. Hmph!

One of my closest friends at the time had a theory – that divorced / separated women (or maybe men as well, but we came at it from the female perspective) were more likely to find love. Again.

This girlfriend had many many friends and colleagues who had bounced back very quickly from relationships straight into another.

We used to talk about it, wondering what it was about people who’d had long-term relationships that allowed them to find another partner – while many of us who had remained single had no such luck.

Was it about our standards? Were we hideously unattractive or just really boring to be around? Were they better at compromise? Were we not the ‘relationship’ type? Were they more accepting? Were they more willing to offer love? Were we too independent? 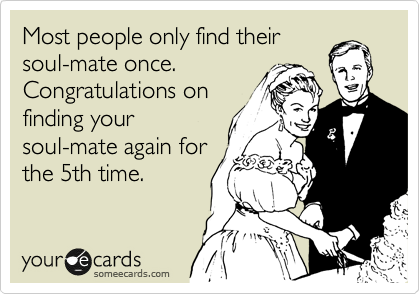 When I was in my early 20s I had a friend who was a serial monogamist. She was NEVER without a serious boyfriend. I suspect she was rarely single for a month or so after each relationship ended before starting the next. And each relationship got serious. Quickly. Being in a relationship was the norm for her.

I’ve been thinking about this lately as I had a conversation with someone about a mutual friend who’s started a new relationship after a marriage breakdown. I’d been out of the loop so hadn’t realised she wasn’t still in mourning for her marriage, when apparently she’s madly in love again. I don’t begrudge her the new love. Good on her… but it did remind me of my friend’s theory which I’ve been thinking about since. And I’m reminded of friends (real and virtual) who’ve found love a second or third time – and wondering what it is that allows them to do so more easily than their longer-term single counterparts.

I don’t think the subject is worth a funding grant or a PhD thesis, but I am kinda intrigued.

Have you found / noticed that people who’ve had longish term relationships are more likely to find another?
Any theories?