I’ve talked before about issues I have with self-worth. And enough-ness. So much so that the idea of going into them AGAIN now seems like I’m rehashing ground I’ve dug up and reburied too many times to count.

But I read a lot about enough-ness nowadays. In terms of us feeling like we ‘are’ enough and ‘have’ enough. Or having too-much. Being ‘extra’ as the young folk possibly say.

I know navel-gazing was around before the internet, but I guess it was more restricted. To conversations over the back fence, at the pub, over afternoon tea or similar.

Now of course we blast it out over the interwebz and force others to ponder the concepts for themselves. And worry that it’s something they weren’t worried about but perhaps should be worried about. 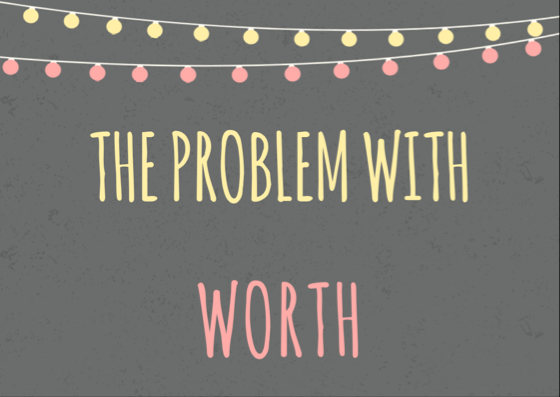 Don’t get me wrong. I think a feeling of ‘worth’ or ‘self-worth’ is a good thing. A very good thing.

However, I’ve been pondering on whether ‘worth’ as a concept, is almost quantitative? And therefore comparable?

Perhaps the same can be said for other feelings or thoughts. Like love. Are some people more loveable than others? Perhaps.

But for some reason the idea of comparing worth and worthiness feels much MUCH worse.

I know some people who’ve been going through crappy times. A young mother with cancer. A friend who’s lost her husband. People with debilitating illnesses.

I usually fall into the grass-is-less-green side of the comparison trap. Poor me. Which isn’t even vaguely healthy. Or true.

But I suspect the same can be said for the flipside…. in my case, worrying I’m not worthy of the blessings I sometimes am bestowed.

I should note these are not things I feel I’ve earned. Like assets or material things I’ve worked bloody hard to buy. Or even some of my (supposed) achievements, requiring me to have made other sacrifices in their honour. I’m actually okay with those.

It’s more about stuff I don’t feel I deserve. Things that seem like they’re more about karma. Or fate. Or worthiness.

Why others and not me?

It occurs to me that my guilt over being more fortunate – when it comes to fate and so forth – implies that there’s something ‘bigger’ than fate.

I saw an episode of the TV show The Good Doctor a while ago. A young boy was dying and he refused to believe in god and heaven and the like. If he did, he said…. it’d mean there WAS a higher being…. that his illness was not simply fate, but predestined in some way. (And therefore avoidable.)

Which brings me back to my original ponderings… if we talk worthiness there’s a sliding scale. Or at least the ability to make comparisons. And for what purpose? I don’t believe in god/s and the like, but I do believe in fate. And to me, it means people SHOULD get what they deserve.

So that begs the question… why are so many lives impacted or destroyed by things beyond their control? And how do the rest of us live with the guilt that ours aren’t?

What are your thoughts on worth / worthiness? On fate. (And while you’re at it, world peace and global warming?)