I was talking to my mother recently about a couple of friends I made when I lived in Canberra. Sadly we lost contact when we all went separate ways – bizarrely we all received great opportunities at the same time. Two of us went on overseas postings and the third went to work as an adviser for a politician. Although the internet and email communication existed, we somehow drifted apart and lost contact.

One of the friends had a plane. Although they had minimal free time, she and her partner were flying enthusiasts and belonged to the local Aeroclub. It was bizarre to me as, when I lived in Mozambique I’d very vaguely recalled visiting an Aeroclub and it’d seemed such an expat / privileged thing to be involved in. So I was pleasantly surprised to see the Canberra Aeroclub hosted very down to earth characters.

One fine day my friend – who I will call Mary (just cos that’s not her name) offered to take me flying – telling me how AMAZING Canberra and surrounds looked from the sky. Plus she wanted company as she logged some more hours in her little plane.

I was flying about quite a bit then – though usually in larger planes of course. Flying didn’t bother me though take-off and landing were my least favourite parts of any journey – for obvious reasons. So I happily accepted Mary’s offer and we arrived at the airport ready for our jaunt. My recall is now a bit vague but I think her plane was a four-seater (two front and two back) and after an inordinate amount of time getting organised we finally climbed on board.

Which is when I started to get worried.

Left vs Right
My first concern was that my friend had the letters L and R written on post-it notes and stuck inside the plane’s windscreen. Now, I’ve never really understood how someone can’t remember their left from their right, but I’ve seen people writing the L and R on their hands, or shaping their left hand into an L – which is fine. But… you don’t really want to be flying with a pilot who can’t easily remember left from right.

We eventually set off and the take off was quite smooth. Next thing we were climbing towards the clouds and the view was as lovely as promised. However…

Radar? What radar?
My friend checked in with the tower and there was some discussion about flight paths (or similar). The crackling voice from the tower talked about other planes in the air and their whereabouts.

“Can you turn around and see if there’s anything on your side?” my friend asked.

What. The. Actual. Fuck?

I’d assumed all planes have radars to ensure you stay gazillions of miles away from each other. But nope, apparently not. Pushing all thoughts of human error aside, I helped her out by turning in my seat to see any oncoming planes. It was like being on a bloody busy freeway and we’re dodging traffic and coming vehicles. Except we’re miles in the air.

No sooner had I come to terms with the need to look out for fellow flyers and my nerves calmed sufficiently it was time to land. Thank God.

But no… it gets better.

Up, down, up, down
As we were preparing to land my friend tells me that she really needs to practise her take-offs and landings.

“Of course,” I said. “No worries,” I said, while mentally screaming and wondering if I could open the door and leap out of the plane without injuring myself significantly.

And that’s what we did. About half a dozen times. We landed and, before slowing completely, took off again. We did a quick loop and landed and took off again. My friend was unhappy about the landings and wanted to keep practising.

Eventually she decided that the first landing had probably been the best (and I had reassured her that all of her landings were smooth – though it wasn’t entirely true) and we were done. Thank fuck!

That evening when I was safely ensconced on my sofa in my apartment I regaled my father with the day’s events. Even from 1500km away I could tell he was somewhat nervous about the idea I’d been up in a small plane.* 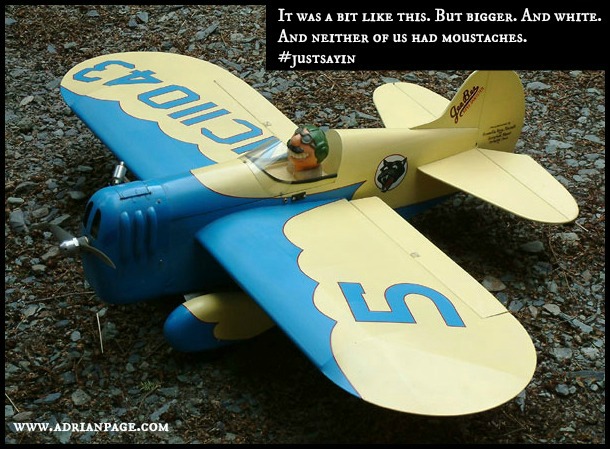 What sort of plane was it, he asked?

“Ummm…. it was white with a cartoon figure on the tail,” I explained to him – obviously an aeronautical expert after my morning of flying.

I suspected an eye-roll at his end as he clarified nervously: “Was it an ultralight plane?”

Eventually we cleared up that I had not been traversing the Canberra skies in a tiny glider; rather something hardier. Which was white with a cartoon figure on the tail.

Have you ever flown with a learner-flyer?
Do you also hate take-offs and landings?

* We were used to small planes as – when I was younger – we often flew from Maryborough / Hervey Bay to Fraser Island on 4-6 seater planes… the type where you skim fairly low and can basically still open a window as air pressure isn’t an issue.

PS. I should note that my friend was actually a fine pilot. It was just a bit weird being privy to the inner workings – like going into the kitchen at your favourite restaurant and being slightly concerned by what you see!

I’m linking up with Jess and her IBOT team today!