I’ve just joined a writers’ group in my new hometown, Hervey Bay. It’s a big achievement for me as I’m usually not much of a ‘joiner’. However… as I don’t know a lot of people here and am trying to take my writing to a different level I figured it would be great to meet others with similar interests. And, I must say, after two gatherings, that’s certainly been the case.

As a newcomer to writers’ groups I really had no idea what to expect. The group seems pretty structured which may (or may not) be the norm. I like the fact that we have the opportunity to participate in writing exercises and – given the time of year – I arrived amidst a ‘homework’ exercise involving a Christmas game.

I’d never heard of the Left and Right Christmas Game.  I discovered during my extensive research (ie Googling it) there appear to be a few versions; but it seems to be a more creative option to either a Secret Santa gift-giving exercise, or a Pass the Parcel game!

In essence the game revolves around a story which contains the words ‘left’ and ‘right’ many times. In one version, the participants sit in a circle each with a small gift they’ve brought along. As the host reads the story, each time the words “right” and “left” are read, the players pass the gift they are holding in that direction. On completion of the story, the player gets to keep the gift they are holding. The Pass the Parcel version involves just one or two gifts passed left / right each time that word is read.

The homework exercise of the writing group required members to concoct a Christmas-themed story which could be used for the game. 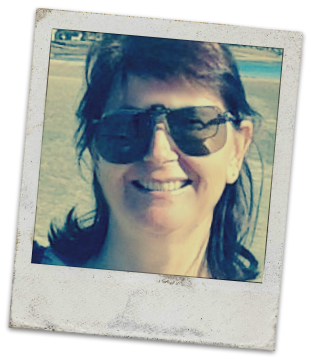 Julie Duke (left) writes in the romance / romance suspense genre and has long had a passion for writing. After a confidence-boosting highly commended prize in a local competition, Julie has gone on to develop a manuscript which she’s been entering in competitions and tweaking based on the feedback she’s receiving. (Oh, and did I mention she’s just lovely?!)

Julie was happy for me to share her Left and Right Christmas Game story, to give you an idea of how to play the game or indeed… you may wish to use her story yourself (PDF print version).

If you aren’t a game-player… feel free to just enjoy the cheeky, charming and clever romance, The Right Gift.

LEFT too late, the RIGHT Christmas gift can be hard to find.  RIGHT now Amy LEFTer began to wonder if she had LEFT everything too late, not just her Christmas shopping. Phillip WRIGHT was RIGHT. She was a procrastinator.

Amy LEFTer turned LEFT, heading for The Mall, telling herself she needed to get into the RIGHT frame of mind if she hoped to find the RIGHT gifts today. The crowds were out in force. She turned LEFT and RIGHT, looking for a parking space. Would it matter whether she bought the RIGHT gifts? Would anyone care? Inside The Mall she turned LEFT. Scratchie tickets and six boxes of chocolates later she turned RIGHT.  An overnight bag for Phillip WRIGHT. Lego sets for her nephews.

“RIGHT, that should do.”

She LEFT The Mall. Now all she had to do was tell Phillip WRIGHT she had come to the RIGHT decision. That only LEFT his reaction.

Phillip WRIGHT started on the LEFT and did the rounds of the jeweller’s. Was he making the RIGHT decision?  His career was very important to him. This overseas posting was the RIGHT thing for him but he was LEFT wondering whether Amy LEFTer would accompany him.

She was procrastinating, as usual.  Couldn’t she see this was the RIGHT move for him?  With his career he knew what was RIGHT but relationships LEFT him floundering. Look at him now, 35, and not a clue why he was being LEFT dangling. Phillip WRIGHT didn’t know what was LEFT for him to do. He only hoped his Christmas gift would make things RIGHT.

Phillip WRIGHT and Amy LEFTer met for dinner Christmas Eve, RIGHT on 7. His flight LEFT for Melbourne early the next morning. He considered it the RIGHT thing to do, to spend Christmas with his parents before he LEFT for London at the end of January. Last year he spent Christmas with Amy LEFTer’s family.  It had LEFT him craving a family of his own. Her young nephews were RIGHT up there with what he considered a family should be. When he LEFT that day he realised Amy LEFTer could be Miss RIGHT.

Phillip WRIGHT’s eyes flickered from LEFT to RIGHT. Amy LEFTer’s standoffish behaviour LEFT him wondering if he had done the RIGHT thing. He LEFT the jeweller’s box in his RIGHT pocket, waiting for the RIGHT moment. Their stilted conversation LEFT him uncomfortable. When they finished their meal the RIGHT moment still had not come.  Phillip WRIGHT knew he had to say something before they LEFT.

He reached into his RIGHT pocket and pushed the small box across the space LEFT between their plates. Amy LEFTer’s eyes widened. She looked LEFT and RIGHT.  Her cheeks grew pink. She opened the jeweller’s box.  The colour LEFT her face.

“Thanks,” she mumbled, and RIGHT before his eyes hers filled with tears.

Her indifferent shrug LEFT him darn RIGHT confused. She reached to her RIGHT and shoved his present RIGHT at him.  He unwrapped an overnight bag.  It LEFT him in no doubt she was telling him he could go overseas on his own.  RIGHT now he felt like crying too.

“So I guess this means you’re not coming to London with me?” he managed to mumble, thinking he had better get this RIGHT.

Amy LEFTer shrugged.  “I was going to but RIGHT now I don’t think it’s a good idea.”

“If you thought we were RIGHT together, you would have asked me to marry you.”

Phillip reached into his LEFT pocket.

“Is this RIGHT?” he asked, pushing another jeweller’s box RIGHT in front of her.

Phillip WRIGHT’s expression LEFT Amy LEFTer in no doubt. This box held the RIGHT gift, the perfect ring for her LEFT hand.

Wow… I can’t even imagine how hard this would be to write…. a bit like a never-ending tongue twister! But what an incredibly lovely story. Thank you very much to Julie for sharing her work!

So, now readers I suggest you go forth and promote the Left and Right Christmas Game to colleagues and friends as a ‘way-more-fun’ alternative to the ‘so-last-year’ Secret Santa or Pass the Parcel! In fact, if I was still working I might have considered writing a (tres-hilarious) workplace story involving my colleagues.

Of course I was also thinking it would make a good drinking game. (But that’s just me!)

Do you have to do the v.annoying group-gift giving at work or with friends?
More importantly… could this be turned into a Christmas drinking game?

Edited: I’ve added another Left and Right Story to my blog this Christmas (2013) … check out The Bungee Jump Sweepstakes.

CLICK here for print version of The Right Gift!